The Rocky Road to The Folk Tree

Posted on October 5, 2014 by Victoria Thomas 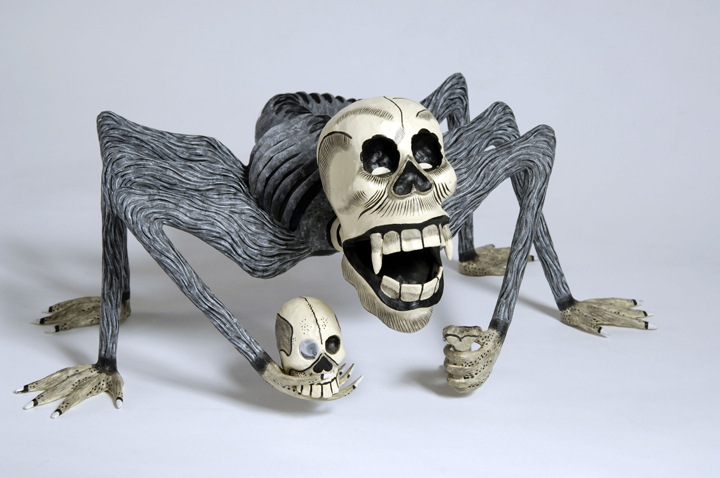 As I approach The Folk Tree, located at 217 South Fair Oaks Avenue in Pasadena, I imagine a whiff of something sharp and pungent. It’s a bit like the perfume of wild sage as the sun sets, or the smoked tang of chili pepper ristras strung in the cooling air. But this aroma is distinct: it’s zempasuchitl, the bright orange marigolds which are indigenous to Mexico and the American Southwest. They are known to this region as the flower of the dead, because their spicy-musk aroma is thought to lead wandering spirits home. I follow an invisible trail of marigold-petals to Rocky Behr’s front door.

The Folk Tree is one of a handful of cultural sparks which ignited the current mainstream recognition of Day of the Dead as an experience indigenous to this continent.

For many ancient people, the astronomical period between the Autumnal Equinox and the Winter Solstice— our current position in the calendar—was viewed as an opening of permeability.  As just two examples, the Celts and the Maya considered these weeks of the year the time when the living and the dead could pass freely between their respective realms. Messages could be brought, offerings could be made. Bonfires, sacrifices and wearing of animal-heads accompanied prayers for prosperity. When visiting the deceased, bringing treats was recommended, as was keeping a mask handy for a hasty exit, since some of the dear departed can get clingy and needy. These pagan roots resonate in Christian calendars as All Saints Day and All Souls Day.

Rocky, now in her 80s, founded this singular folk art gallery at the edge of Old Town 30 years ago. For three decades, she, too, was a wandering spirit, her sprawling international itinerary always leading back to Mexico, often to Oaxaca which she calls her “place in the sun” and her “place of my heart.”

Along the way, she has amassed a global knowledge of artesania, the folk art traditions of Mexico, Central and South America, which has made her a sought-out world authority on the subject. The array of traditional objects made from tin, ceramic, wood, sugar, glass, straw, paper, cartoneria (aka papier-mache—the work of master Joel Garcia is not to be missed), embroidered cottons, loom-woven huipiles, sterling silver jewelry, and hand-dyed woolen textiles bursting from the walls of her shop are coveted by museums and private collectors. Rocky has cultivated intimate alliances with artists and their families since she opened her doors, relationships of trust which never come easily. The Folk Tree is also a prestigious showroom space for contemporary artists in every medium.

About 20 years ago or so, Rocky invited me to accompany her on a buying trip across Mexico, because I spoke Spanish and—as she said with characteristic understatement, eying my shoulders, back and broad, flat feet—“You look like you can lift and carry heavy things.”

It was May, and rain slanted down over us from a nublado sky as we drove into DF (Mexico City), making for a subdued arrival. In those days, the taxis were still the iconic lime-green VW bugs, and the rounds of visits had begun. One evening, she hustled me down an alley where she said a vendor sold the world’s best rotisserie chicken. She was right. On her advice, we ordered our bird with extra livers, and she wrinkled her nose with pleasure as we ate. Another evening, we arrived in the silver-smithing capital, Taxco, just as dusk was falling. Our cottage on a hillside had windows with no screens and a door with no lock. We fell back onto our little beds, and Rocky’s sleeping breath soon became a feathery purr as the rain hissed over the wooden shutters.

In more rustic coordinates like Oaxaca, pavement gave way to mud. I trudged after Rocky’s feet in their sensible Birkenstocks, enlivened by her trademark bright yellow or marigold-orange cotton socks, as we met with generations of artists who welcomed her as a returning prodigal daughter, playfully scolding and reminding her that her real home was not up in el Norte, but here with them.

Make tracks of your own to The Folk Tree for this years’ 31st Annual Day of the Dead Altars and Ephemera exhibition. The public reception on Saturday, October 11, from 2 – 6 pm, will feature en calavera face-painting and Muertos head-pieces by Jeanine Montellano (who will return for more on November 1).

Of course, skully stuff will abound as it does every day at The Folk Tree. More than 40 local artists have created ofrendas, or altars, honoring loved ones.  As is a tradition at The Folk Tree, Nancy Ann Jones has created a community altar, where visitors are invited to write messages to the deceased and tie them to sticks which are planted in a tray of sand. At the close of the holiday, the artist ceremonially burns the messages to send them on their way. The Folk Tree (626) 795-8733.

31st Annual Day of the Dead Altars and Ephemera exhibition through November 2, 2014

Brooklyn-born Victoria Thomas loves writing about flora and fauna, although she chooses to do so in an urban setting. If she had it all to do over again, she might have become a forensic entomologist. She lives in Los Angeles.
View all posts by Victoria Thomas →
This entry was posted in Art, Attractions, Events, Upcoming Events. Bookmark the permalink.

5 Responses to The Rocky Road to The Folk Tree