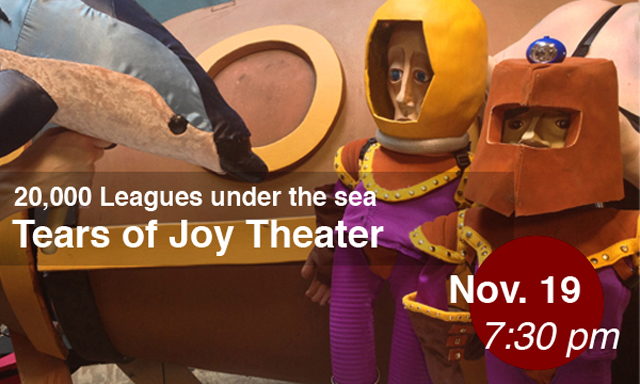 Portland-based puppet theater Tears of Joy presents Julius Verne’s “20,000 Leagues Under The Sea” on November 19 at Théâtre Raymond Kabbaz! The all-ages show starts at 7:30pm and is $15 for adults, $10 for students. “Discover some of the most exciting scenes from the book, aboard the Nautilus and under the sea, combining humor with the science and technology imagined by Verne.”

Tears of Joy Theatre, founded in 1971 by Reg and Janet Bradley, has earned the Citation of Excellence in the Art of Puppetry four times, and has also received a Washington State Governor’s Arts Award and a Young Audiences Sunburst Award. The group is invited once a year to perform in L.A. by the Théâtre Raymond Kabbaz which is a part of Le Lycée Français de Los Angeles.

Here’s a video on the making of the puppets and sets:

Simone Snaith writes young adult and fantasy novels, and sings in the band Turning Violet. A fan of scifi, fantasy, the supernatural and most things from the '80s, she enjoys reviewing music, books and movies. You can read about her own books at simonesnaith.com.
View all posts by Simone Snaith →
This entry was posted in Events, Miscellanious, Theater, Upcoming Events and tagged jules verne, nautilus, puppets, theatre raymond kabbaz. Bookmark the permalink.