Gary Hoey talks about guitars, music and Christmas at the Coach House in San Juan Capistrano 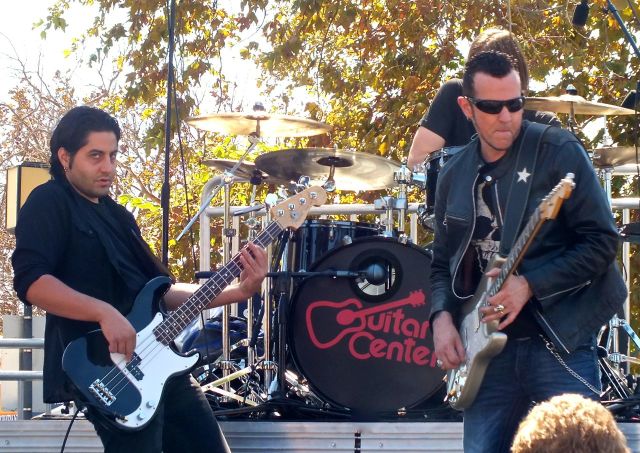 I caught up Friday with Gary Hoey before his show at the Coach House in San Juan Capistrano, part of his 19th Annual ‘Ho Ho Hoey’ Tour, where he combines his original tunes, covers of some dynamite rock, surf and blues songs along with some high-energy performances of many beloved Christmas Carols. The sold-out concert is is an annual treat for the multitude of Gary’s fans. From the opening rendition of the famous blues song Going Down, to the encore of Santa Claus is Coming to Town, Gary provided a show that kept the crowd cheering and always surprised at what direction Gary took his musical offerings to.

Gary grew up in Boston, playing guitar and teaching others how to play, which has been part of his life-long commitment to music and education. He is currently at work on a new website which will feature over 100 video lessons for budding guitarists. Growing up, he counted among his musical influences “Jimi Hendrix, Eric Clapton, Jeff Beck……then Stevie Ray Vaughan. So many guys, then a lot of the blues guys, Freddie King, B.B. King. Those were a lot of my influences growing up. Rick Derringer, Brian May of Queen; I could go on and on”, Gary said. Of course, I had to ask Gary about one song that his hometown looks to as it’s own iconic song, the Standell’s Dirty Water. When asked if he ever covered it, Gary said, “Absolutely have played it, yes. Several times, in bands and different situations and charity events. Dirty Water, definitely a kind of historic song for Bostonians. Just always loved the song. Great song. Absolutely!”. 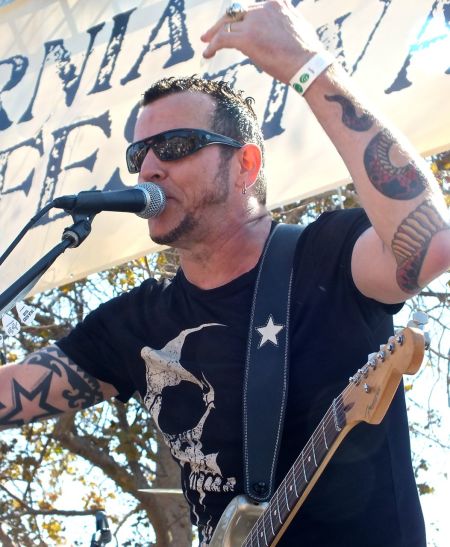 Before the show, I asked Gary about the song Going Down, which he proceeded to open Friday evening’s show with a blistering version of. I asked him how he kept the song, originally done by Freddie King and then famously remade by the Jeff Beck Group, sounding so fresh. “Well, I try to add my own flair to it, try something different. I try to re-invent it a little bit. I got a call from Michael Anthony, who played with Van Halen and Chickenfoot and I sent him a copy of the album, he called me up and said, ‘Dude, I’ve played that song with everyone from Jeff Beck to so-and-so, and you’ve totally re-invented that song, it’s like a new version’. And I try to re-invent something or come up with, find some little twist. And if I can’t, I usually won’t do it. If it’s going to sound too close to the original, then why do it?”, Gary said.

Gary’s mix included several original songs from his most recent album, Deja Blues. When he was asked about why he likes the blues, Gary said, “Well I grew up on the blues. It’s just something about the blues, man, you can record a 3 minute pop song, make it perfect, perfect little melodies in their perfect little places and the arrangements just perfect, but with the blues, you know it’s just a 5 minute journey and it’s more spontaneous, more live-feeling to me, the way the blues are. And it’s the simplest style, the music, but it’s the hardest to play, in a lot of ways, because you have to hold back, you have to say something with it, you can’t just phone it in. People can tell if you’re ‘phoning it in’, so that’s my attraction to the blues, and it just seems to be endless. I can always learn more, different arrangements, different songs, It’s pretty satisfying, you can play blues with other musicians and it’s a universal language”. Drummer Matt and bass player A. J. definitely help, laying a solid background for all of Gary’s music.

Indeed, on songs such as Stranger in My Own Town he showed a rare talent for making a bluesy song that also had a catchy riff that just keeps going long after the song is over. In other songs, such as the title track from his album Utopia, he showed that his guitar playing can be as fast and creative as other top guitarists such as Joe Satriani and Steve Morse. The sounds he gets out of his trademark Fender Telecaster are what he looked to achieve for years. “It’s funny, I started out on a Gibson Les Paul, that’s all I played. And it was because Jeff Beck, on the back of his album Wired, he had a Les Paul on the back cover and that’s why I bought it. Years later, the Les Paul really started weighing on my back, it was really heavy and I was looking for a different guitar to play. Fender approached me in 1996 about endorsing them and that’s when I started working with them. Almost 20 years I’ve been working with Fender. You know, Stratocasters, they have a little more dynamics, they have more sound you can pull out of them. It’s not that easy to play, the Gibson Les Paul is probably easier to play, but Strats, they’re more rewarding for me and a lot of my favorite guitar players, Jimi Hendrix, Eric Clapton, Jeff Beck, they played Fender Strats, Stevie Ray, so as soon as I started playing Strats, I said, ‘oh this is the sound I’ve been hearing in my head!’. And that is really the main thing, the Fender has let me get the sound I was hearing in my head”.

As Gary proved during the concert, his playing really defies categorization. Before the show, he said to me, “Well, you know, I did an interview the other day with someone and they said, ‘Man, you probably have one of the most diverse carreers we’ve ever seen. You’ve recorded Christmas music, blues music, rock music, surf music’, they’re like, ‘what genre have you not covered?’. They asked me why I do that and you know, I’ve been called a surf rock guitarist, all these things, but I just get bored doing the same things, so I get these ideas in my head, I’m going to do a holiday record, I’m going to do a surf album, so you know it keeps me wxcited about still playing music. A lot of my fans tell me they love me because it all doesn’t sound the same and you do different stuff, so it’s OK if people categorize me because that’s important but I just look at myself as kind of a rock guitar player that happens to play the blues and other stuff”. 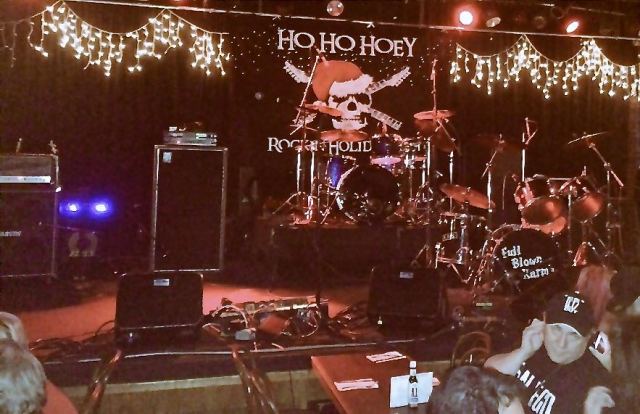 Gary really feels the Christmas spirit and tries to imbue every one of his ‘Ho Ho Hoey’ shows with a good selection of carols. It doesn’t just end there, however. For the past several years, he has also given away a Fender Squier Stratocaster as a Chrismas present to one lucky member of his newsletter and Facebook Fan Clubs. At Friday night’s show, he even announced that for the 20th Annual Tour, he was going to work on a version of the Nutcracker Suite, which got thunderous applause from the crowd.

Gary has a soft spot for one other kind of music, however. One of the best songs he does is the movie theme.surf music standard, Peter Gunn. Gary talked about his love of those old surf tunes, saying “Peter Gunn was part of my album called Monster Surf. I had scored Endless Summer II twenty years ago and worked with Dick Dale, got to hang out with all the surfers and it really became a part of me. I wanted to do a album where I remade a lot of the old surf songs. You know, like Walk Don’t Run, Pipeline, Miserlou which I recorded with Dick Dale; and then with Peter Gunn it was the same kind of thing. I loved the song, but I wanted to kind of re-invent the song, make it heavier, and I try to add a shot of adrenalin to those old surf songs. If you’ve heard the whole Monster Surf album, we try to cover all the classics, maybe re-invent them a little bit. And for the younger generation who maybe never heard them, they’re going ‘Wow, this is really cool music’ and people who have heard them forever are saying this is really different”.

After the concert, Gary stuck around to meet some of his fans. With smiles on their faces, you could tell that on and off the stage, Gary is a crowd favorite. Both as a consumate guitarist and performer, Gary brought a lot of holiday cheer to the Coach House Friday night.
www.GaryHoey.com

Ed is a native of Los Angeles who loves food and food cultures. Whether he's looking for the best ceviche in Colombia, the best poke in Hawaii, the best tequila in Jalisco or the best Taiwanese Beef Roll in Los Angeles, it's all good food! He also loves a good drink. He's had Mai Tais in Hawaii, Bourbon in Kentucky, Tequila in Mexico and Rum in Jamaica. His wine escapades have taken him to Napa, Sonoma, the Willamette Valley and the Santa Ynez Valley. And he's had beer all over the world! Music is another of Ed's passion, writing and interviewing many classic rock, rock and blues musicians. Getting the great stories of road experiences from them is a particular delight. Traveling also fits in with Ed's writing, exploring all over to find the most interesting places to visit, even in out of the way areas.
View all posts by Ed Simon →
This entry was posted in Interviews, Miscellanious, Music, Videos and tagged Blues, Christmas, concert, Ed Simon, Gary Hoey, Guitar, Ho Ho Hoey, Peter Gunn, Rock, San Juan Capistrano, show, surf music. Bookmark the permalink.