Relax! They Can’t Take Your Milky Bar Away. 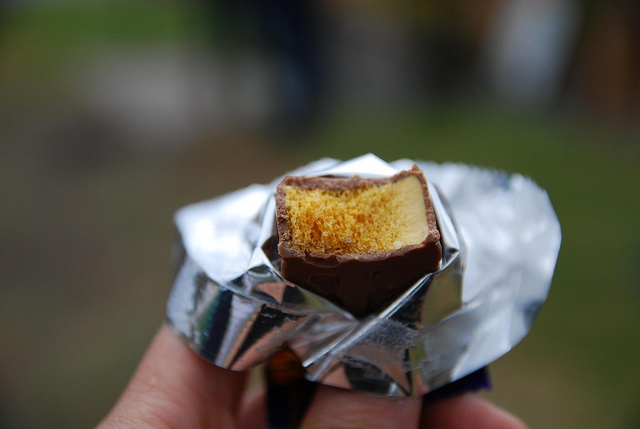 As near as I can gather among the shrieking panic of social media, Cadbury can no longer export their chocolate to the US.  It seems Cadbury licensed Hershey’s to produce American-made Cadbury. American-made Cadbury has more sugar, more emulsifiers and less milk than the Cadbury chocolate from the UK. People are understandably upset.  In the settlement, Let’s Buy British Imports (LBB) will also stop importing Kit Kats, Yorkie, Maltesers, and Toffee Crisps because they are too similar to Hershey’s products or packaging.

But it is not as dire as it seems. At this juncture it appears those are the only chocolates affected.  Not all of your favorite British chocolate bars are produced by Cadbury. True, you will have to get your Flake, Crunchie, or Curlywurlys on the black market from now on, but Cadbury is not the only game in town.

There are three major candy companies in the UK — Mars, Nestle and Cadbury. Mars and Nestle can still export most of their chocolate bars to the US. Mars sells my personal favorite candy bar, Bounty, as well as Flight, Galaxy, Turkish Delight and obviously, the Mars Bar with the black wrapper. Celebrations Chocolates and Quality Street can take the place of Cadbury’s Roses. Nestle manufactures Lion, Aero, Smarties, Milky Bar, Milkybar Buttons, and Caramac.

So relax, proceed in a calm and reasonable manner to your local import shop and stock up on your Dairy Milk bars. They can probably be imported from Canada, or we could start a co-op and import Cadbury’s ourselves from English online stores. Then we can be bootleggers.

Born and raised in the great city of Los Angeles, this food, culture and music-loving punk rock angeleno wants to turn you on to all that is funky, delicious and weird in the city. While Elise holds down the fort, her adventurous alter ego Kiki Maraschino is known to roam the country in search of catfish.
View all posts by Elise Thompson →
This entry was posted in Food, News & Sports and tagged Cadburys, Cadburys ban, Cadburys import, Herheys settlement with Cadburys. Bookmark the permalink.