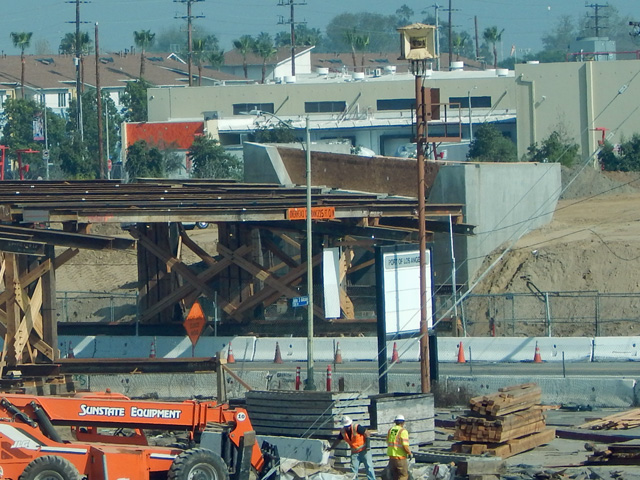 here’s a shot from the harbor freeway (I-110), the going north side from pedro at where the new ‘c’ street offramp is being built. you see that yellow air raid siren on a brown pole kind of to your starboard and then that gray cement thing behind it? that gray cement thing is gonna be the other side of the overpass that’s part of that new onramp caltrans is constructing that goes over figueroa street just north of what was ‘b’ street but now is named after ilwu founder harry bridges. on the northeast corner of this intersection – where that gray cement thing is – well that used to be where shipwreck joey’s used to be but it got torn down years ago (maybe twentyfive?!) but when we were minutemen, d. boon’s pop danny told me that pad had free spaghetti nights on either mondays or tuesdays and it was pretty good. he didn’t go there when it was a topless bar though, please don’t get the wrong impression – it was a country and western music club then.

about that air raid siren: there’s one of those just like this one in pedro at the bottom of battery street where it met park western drive which was just down the hill a couple of blocks from where the boon’s lived – trippy how the siren’s still there but their pad got plowed to make way for the “tarragona” tract home install that wiped out a whole neighborhood (econo proj but still neighborhood) where they even made up new street names, no respect for what was before. now they don’t do what they did in the old days which was to have a drill on the last friday of each month at ten am (I think that’s when it was) and blow those things off – what a fucking sound! we would run around that pole and trip on the reality of what that siren wailing really could mean, you know? crimony! that’s where the tune I wrote called “dream told by moto” got its inspiration. big respect to brother danny salvador who was the one guitarists in the bright orange band, the other being d. boon.