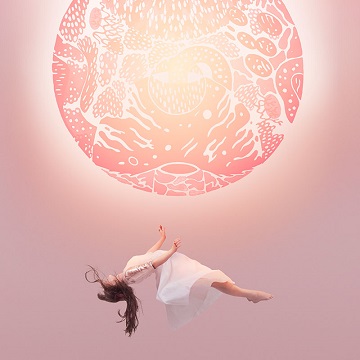 To say that Purity Ring has avoided the “sophomore slump” with their new album Another Eternity would be a massive understatement. The quirky electronic duo’s debut Shrines (reviewed here) is an impeccable collection of tightly-constructed songs that blend beats, synths and pretty but surreal vocals. Another Eternity makes further strides in their unique combination of indie pop and dance music, taking it to a grander scale with more dynamics and perhaps less of the elements of hiphop that twinge through Shrines.

Purity Ring are vocalist Megan James and percussionist Corin Roddick who plays on an invented, light-up instrument – best seen in their excellent Conan O’Brien performance of “Bodyache” – as well as running the live electronics. James apparently designs the duo’s clothes for their concerts and her galactic outfit in the Conan set is pretty great. They have an enjoyable space-age aesthetic that I witnessed at their El Rey concert last year (reviewed here), not quite as far out there as Bjork’s, but still very creative and weird.

The songs on the new album have more of an obvious dance music feel and James’s sweetly creepy, little girl voice is slightly warmer, singing lyrics that are more accessible but still odd. (A line like “climb up in my rattling spine and i’ll contract” in “Repetition” is typical of Shrines, but now there are clear statements like “i lied, now i’m lying awake, i cried, until my body ached” in “Bodyache”.) The duo’s songwriting skills are strong, and probably improved by the fact that Another Eternity was written while the two of them were together in their hometown of Edmonton, Alberta, instead of the long distance collaboration that made up their debut.

Next to the irresistibly catchy “Bodyache”, the strongest track is probably “Stranger Than Earth”, which features booming bass beats, epic swells of techno, moody stops and starts, and a great vocal melody with its “I wasn’t thinking about you” hook. The bridge is a head-bopper, and when the whole thing ends, I just want to compulsively play it again and again. After it on the album is the darkly pretty “Begin Again” which, along with “Flood on the Floor”, also breaks into near techno levels on the chorus – proof, in my case, that you don’t have to be a fan of a certain genre to enjoy clever references to it.

“Heartsigh” opens the record with pretty keyboard and bursts of skittering beats, while “Sea Castle” – another of my favorites – expertly contrasts lullaby-like verses with an exciting chorus. I think the best way to describe Purity Ring is that, especially with this new album, they make me feel like I’ve traveled somewhere and returned, and I’m grateful for it.

Simone Snaith writes young adult and fantasy novels, and sings in the band Turning Violet. A fan of scifi, fantasy, the supernatural and most things from the '80s, she enjoys reviewing music, books and movies. You can read about her own books at simonesnaith.com.
View all posts by Simone Snaith →
This entry was posted in Miscellanious, Music and tagged corin roddick, dream pop, electronic, megan james, purity ring. Bookmark the permalink.