Book Review “I Fought The Law”: The Life And Strange Death Of Bobby Fuller 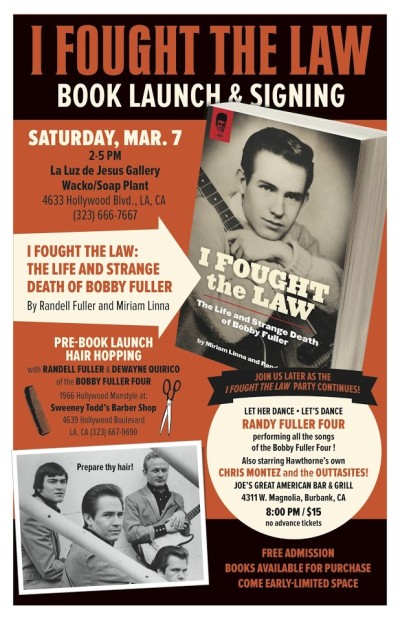 The book “I fought The Law: The Life and Strange Death of Bobby Fuller” as told by Miriam Linna and Bobby’s brother Randell Fuller touches a “Pop Culture” nerve for any one who grew in or is interested in mid-20th century America popular music and early Rock N’ Roll.

Miriam and Randy detail the early life of the Fuller family and Bobby’s rise to fame with numerous anecdotal style stories with various points of views offered by those closest to Bobby from his childhood upbringing to the final days leading to and following his untimely death.

Story Continues After The Break

The early chapters of the book are summed up with a much more untamed western feeling that comes from a roughneck west Texan up-bringing in a pre-Kennedy assassination “America”. My mind immediately drifted visually REM’s “Man On The Moon” video. It’s that nostalgic imagery of the lonely cowboy in blue jeans, shirt with rolled up sleeves and the iconic cowboy hat against a dusty background that came to mind as I read of Bobby’s childhood and family life. The story really pulls on my memories as a child that are filled with fears, hopes and expectations in a bright and confusing mid-century America.

The story continues as Bobby and Randy come of age and explore their musical futures in the El Paso Texas area. Bobby was a naturally talented musician and a devotee of Buddy Holly. He succeeds in having lots of regional recognition and success with his music, which leads to him exploring his dreams of Rock N’ Roll success on the west coast. During that era, Rock N’ Roll was an indie business. With small record labels springing up everywhere and new talent making the charts in way that would be inconceivable in today’s music market. The were only 3 big records label at the time: which include Columbia, Capitol and Decca. Columbia didn’t do Rock N’ Roll at the time. Bobby found himself in the midst of the musical hot bed of early Rock N Roll. The books references notables like: Stephanie Nicks (Stevie Nicks), Charlie Daniels, Alex Chilton, Dick Dale, Casey Casem, Phil Spector, Herman Hermits and Mia Farrow. It really gives a unique perspective on the hot bubbly cauldron of creativity of the music scene of that era.

When Bobby finally established himself in LA the Bobby Fuller Four were regulars at a place PJ’s. Eventually, PJ’s became The Starwood.  Bobby captured a lot of attention after hitting all the teen Television shows of the time like: Shebang, Shivaree, The Lloyd Thaxton Show, Hollywood A Go Go and Ninth Street West on LA’s very own KHJ-TV. With this exposure Bobby and crew hit #26 on the Billboard charts with “Let Her Dance”. Obviously, “I Fought The Law” written by Sonny Curtis of Buddy Holly’s Crickets was next in line.

With this much heat on any band, things will happen. “I Fought The Law” topping the charts exposed tensions in the band that were creating a lot of inside rumblings and trouble. In a time when organized crime and criminal activities were part of the music world, the music industry was a dirty business. As the book concludes its story of Bobby’s final days, those aspects are touched upon in the story. There were lingering hints that Charlie Manson, at the time an aspiring musician, was in the peripheral circles of the band. Besides the shadowy elements of criminal networks.

The band was breaking apart under the pressure of touring obligations and band members were not getting their due as Bobby became the focus of the public’s interest. Bobby’s fame was overshadowing everything else as the leader and frontman of the band, and things were falling apart. This disintegration was climaxed by the sudden and still inexplicable death of Bobby Fuller, who was found in his car dead and in a horrible state on July 18th, 1966. There are various perspectives put forth in the book that speculates on what happened to Bobby before his death that may have led to his death, from those who saw or heard from him last. There were 3 different theories offered about his death that suggest different scenarios of what may have taken place, but nothing definitive. His death left his family broken and at a loss to explain this tragedy.

“I Fought The Law” is a story and a microcosm of the hopes. dreams and turbulence of the period, as well as a guide to understanding the mechanics of the music business of that time. “I Fought The Law” keenly expresses the hopes and dreams of a mid-century America that no longer exist and is sorely missed.

The “I Fought The Law” book signing will take place at La Luz De Jesus Gallery this Saturday March 7th from 2pm to 5pm at 4633 Hollywood Blvd, Los Angeles, CA 90027. Admittance is free.

Billy Bennight is a writer, photographer and wardrobe stylist with expertise and years of experience in these disciplines. His musical youth started as a Punk Rocker and has expanded into exploring many genres of music, with an keen interest in art, fashion, photography and writing. He shoots celebrity events and red carpets for The Photo Access and ZUMA Press. He is a member of the Los Angeles Art Association. His images have been published in The Los Angeles Times, People Magazine, Wall Street Journal and Vanity Fair. He's very engaged in life. You can follow him on his Facebook page at: www.facebook.com/billybennightartist and on Instagram and Twitter @billybennight
View all posts by Billy Bennight →
This entry was posted in Art, Events, Music, News & Sports and tagged Alex Chilton, Billy Bennight, Casey Casem, Charlie Daniels, Charlie Manson, Dick Dale, Early Rock N' Roll, Herman Hermits, Hollywood, Mia Farrow, Mid-Century, Muisc History, phil spector, pop culture, Ritchie Valens, Rock and Roll. Buddy Holly, Rock N Roll, Stevie Nicks, surf, surf music, The Box Tops, The Clash. Bookmark the permalink.

2 Responses to Book Review “I Fought The Law”: The Life And Strange Death Of Bobby Fuller