Live Review: Will Jay at The Mint 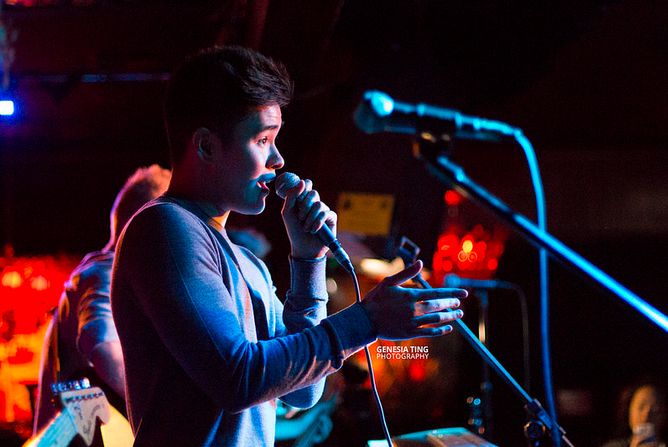 Will Jay at the Mint. Photo by Genesia Ting for the Los Angeles Beat.

Last Saturday I attended emerging solo artist Will Jay’s concert at The Mint. He put on a stellar performance, and captivated his audience from start to end. I arrived at about 2:00pm, and I was let into the venue at around 2:15pm. Will was finishing up his soundcheck. He went backstage afterward to complete several interviews.

His opening act, The House on Cliff, was an instant hit with the audience, as Will had been a former IM5 boyband member. IM5 had previously toured a lot with The House on Cliff. They performed a couple of songs off of their recent self-titled EP.  Eva Amantea and Nikki Arambulo, interviewers and friends of Will introduced him on stage. Will started with his recently released single, “Anti-Social Media.”  The song carefully criticized the connectivity of our day-to-day lives with social media, and urged us to take a look up from our phones and live in the moment.  He was backed by the House on Cliff.  The crowd sang along to the upbeat, ukulele-filled song.  They had highly anticipated his performance of this song live, as it was his first live show as a new solo artist.

He then proceeded to perform an unreleased new single, titled “Every Little Piece.”  It reminded me of Ed Sheeran songs, who Will had said was one of his biggest musical inspirations.  Afterward, he put his own twist on “Heartless,” a single that was released back in his IM5 days.  He completely killed the rapping portion, in my opinion.  He then brought out one of his long-time friends, Kate Grahn, to perform “Smoke from Distant Fires.”  Will said this was one of his epiphany songs that made him realize he wanted to be in the music industry.  Their harmonizing was amazing, but the microphone had detached from the microphone stand in the middle of their performance.

Shortly after, Will brought out his other friend, Dalton Rapattoni.  Dalton was a former member of IM5 as well.  They performed “Hercules,” a song they both co-wrote for the Fly Away Hero recent EP (Dalton’s band).  It was a crowd favorite, as it had an extremely catchy and slow tune with a great message behind it.  At the end of the song, Will and Dalton ended with a line from “Superman,” a song that was released from IM5 more than a year ago.  Will then performed two more unreleased originals to end the show, “Famous to You” and “Vampire.”  Both were instant hits with the crowd.  I personally like the jazzy throwback vibe of “Vampire.”  You can check out both below.

After the show, Will generously allowed 1 1/2 hours for the meet and greet.  Most artists and events nowadays only allow 1 photo per fan, and are typically rushed by security.  I believe the fans appreciated this leniency, and many fans were able to get 3 or 4 photos with will and have a more personalized meet and greet fan experience.  This show was overall extremely diverse and enticing, and I am excited to see what Will has to offer in the future.

Genesia Ting is a product designer by day and concert photographer by evening. She enjoys discovering new eateries in the Los Angeles area, hiking by the coast, and exploring different parts of LA.
View all posts by Genesia Ting →
This entry was posted in Miscellanious and tagged dalton rapattoni, david scarzone, genesia ting, kate grahn, the house on cliff, the mint, will jay, will jay live. Bookmark the permalink.