Peaches: World Premiere Book Signing of “What Else Is In The Teaches of Peaches” at La Luz de Jesus 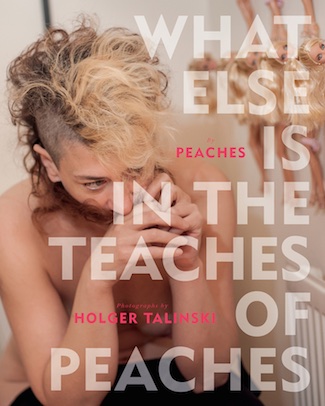 I came to Peaches via a very circuitous route, while watching “Lost In Translation”, in the scene where Bill Murry was enjoying a topless dance in Tokyo at some topless bar. I love the film and repeatedly watched it. I was falling in love with Scarlett Johansson before I started falling out of love with her after Ghost World. I created my own mythology about the song I was hearing in that scene that had little to do with the truth or reality. One of the untruths I entertained about the song, “Fuck The Pain Away” was it must be one of those fun Japanese Pop ensemble like the “5,6,7,8’s”, Shonen Knife or Melon: who came up with these unique non-western interpretations of western styled music with their Kooky “Pacific Rim” world view. Also, I considered the idea of the word FUCK, being used in the song, wasn’t as clearly defined or offensive from a foreign perspective as it is in our western minds and that explained its frequent use in the chorus. I did the research and obviously, that couldn’t be further from the truth!

Then Indy 103 came into existence and Peaches came into regular rotation as a budding Rock Star with her duet of “Kick It“with Iggy Pop. Her duet with Iggy gave her Punk Rock street credibility and her reputation grew. Stephen Hauptfur, in 2006, threw a huge New Years party in DTLA with Peaches as the headliner. I was stoked to finally see this agitprop styled gender bending musician perform. I remember part of the show, but then it becomes fuzzy, because of the copious amounts of FREE premium quality of liqueur present for VIP attendees. Yeah, I was good for about  3 or 4 songs before I drifted or rather crashed into what I call autopilot. This is where I drifted in to a Chrissie Hynde lyric from “Tattooed Love Boys“, “I went apewire ’cause I thought, Like I’d like it little tease, But I didn’t mean it, But you mess with the goods doll, honey you gotta pay, yeah!” And we all know we don’t want to become another human interest story!

Peaches, born Merrill Nisker in Toronto, has lived and worked in Berlin since 2000. Some of her collaborations or appearances as a guest vocalist have included her on albums by Pink, R.E.M., Iggy Pop, Major Lazer, and Christina Aguilera. Her songs have been featured in dozens of films and TV shows including Mean Girls, Lost in Translation, Whip It, 30 Rock, Ugly Betty, South Park, and True Blood. Peaches’s most ambitious work to date was the mythical autobiographical electrorock stage-show-turned-film called “Peaches Does Herself“. Her feature film debuted at the 2012 Toronto Film Festival and has shown in over seventy film festivals worldwide. Peaches will be expanding the direction of her artistic career at the La Luz De Jesus book signing event with a new pictorial offering.

This Saturday, May 17th, Peaches will be having a World Premiere books signing event for “What Else Is in the Teaches of Peaches” at La Luz De Jesus. This book launch is a precursor to Peaches’ first new album in over five years entitled “RUB” which will be released in 2015.  The book “What Else Is in the Teaches of Peaches” is an outrageous and provocative photograph book. This volume presents a mesmerizing collection of Holger Talinski’s evocative and sometimes erotic photos, on and off stage, of transgressive musical artist Peaches with accompanying text by Peaches, Michael Stipe (R.E.M.), Yoko Ono, and the actress Ellen Page, best known for her lead role in the film Juno, which garnered her an ©Oscar® nomination for Best Actress. The book signing will take place May 17th from 7pm to 10pm. You can have your own bite of the peach Saturday night!

Billy Bennight is a writer, photographer and wardrobe stylist with expertise and years of experience in these disciplines. His musical youth started as a Punk Rocker and has expanded into exploring many genres of music, with an keen interest in art, fashion, photography and writing. He shoots celebrity events and red carpets for The Photo Access and ZUMA Press. He is a member of the Los Angeles Art Association. His images have been published in The Los Angeles Times, People Magazine, Wall Street Journal and Vanity Fair. He's very engaged in life. You can follow him on his Facebook page at: www.facebook.com/billybennightartist and on Instagram and Twitter @billybennight
View all posts by Billy Bennight →
This entry was posted in Miscellanious. Bookmark the permalink.