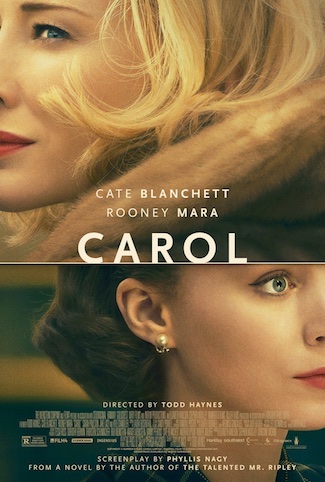 Carol is The Film Independent Spirit Awards’ nomination for best picture, best actress, best screen play, best director, and there appears to be some Oscar buzz. It is a beautiful picture, set somewhere in the mid-20th Century in New York. There’s great wardrobe, scenery and a beautiful depiction of the period’s sensibilities in this movie, but there’s a flatness that haunts the feature throughout its run.

Carol Aird, played by Cate Blanchett, is upper class, erudite and sophisticated while Therese Belivet, played by Rooney Mara, is a young, eagerly wide-eyed ingenue. Therese Belivet meets Carol Aird by chance in the department store where she works during the Christmas season. Carol, who’s embroiled in a divorce, leaves her gloves behind by accident, and Therese finds them. It’s Therese’s call to Carol in order to return the gloves that sparks a friendship between them both.

The body of the story revolves around the two getting acquainted in a series of dates, as friends, that gradually moves to deeper interest and a demure version of lust, mostly on Carol’s part. Carol’s relationship with her soon to be ex-husband Harge Aird, played by Kyle Chandler, disintegrates further. Harge still wants the marriage, and Carol is unsatisfied and yearns for something more, and something different. Carol’s attention to Therese becomes obvious to Harge, and he lashes out physically and emotionally at Carol with threats and abuse. Carol responds at one point with during a heated argument, “You knew what kind of woman I was when you married me” intimating her interest in women and continuing interest in women. 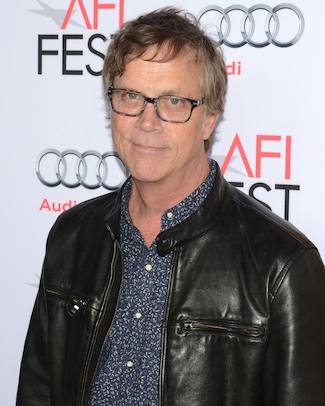 Director Todd Haynes at AFI FEST Screening of Carol at The Egyptian.

The arc of the story runs in a predictable manner based on similar movies within this genre I’ve viewed in the past. Finally, the moment everyone has been waiting for comes to fruition, where Carol and Therese make love for the first time in a modest mid-western motel during a secret road trip. For those who are interested, Cate Blanchet doesn’t give up much skin, whereas Rooney Mara shares considerably to make the scene work. There’s an incident the morning after, where Carol discovers they have been tailed by a PI and have been recorded in the heat of their romantic passion.

The remainder of Carol focuses on the custody battle between Carol and Harge over their one child, and a self-imposed hiatus for Carol from Therese. Once the details of the custody struggle between her and Harge have reached its dramatic end, the movie returns to Carol’s interest in Therese. The ending moments are all hedged around the question. “is there still love in Therese’s heart for Carol?”. Carol is a beautiful period romantic drama that produces few revelations or epiphanies about the human condition or what makes love tick, but has a gorgeous wardrobe.

Billy Bennight is a writer, photographer and wardrobe stylist with expertise and years of experience in these disciplines. His musical youth started as a Punk Rocker and has expanded into exploring many genres of music, with an keen interest in art, fashion, photography and writing. He shoots celebrity events and red carpets for The Photo Access and ZUMA Press. He is a member of the Los Angeles Art Association. His images have been published in The Los Angeles Times, People Magazine, Wall Street Journal and Vanity Fair. He's very engaged in life. You can follow him on his Facebook page at: www.facebook.com/billybennightartist and on Instagram and Twitter @billybennight
View all posts by Billy Bennight →
This entry was posted in Movies, News & Sports and tagged Academy Awards, best actress, best director, best picture, Billy Bennight, Fil, Lesbian, LGBT, Lovers, Movie, Nomination, Oscar, Review, romance, The Egyptian, The Film Independent Spirit Awards, Todd Haynes. Bookmark the permalink.