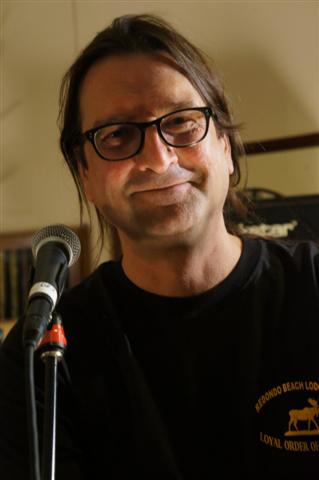 Dez Cadena – former member of Black Flag, Redd Kross, DC3, Bulimia Banquet, Vida, and countless other bands, most recently seen touring with the Misfits and Flag – is one of those rare punk rock pioneers for whom  everyone has a kind word. He’s a lot of peoples’ favorite voice of Black Flag, a deep throat monotone howl that powered “Six Pack”, “American Waste” and “I’ve Heard It Before.” But he’s also highly spoken of as a great guy, a friendly face and an energetic participant who makes music happen.

So it’s no surprise that some heavy friends are turning out for two nights at Cafe Nela to help Cadena out, during his recovery from cancer treatment.

The bill on Saturday, November 21 reads like an SST Records family reunion, with sets from Husker Du’s Grant Hart, Saccharine Trust and Mike Watt, along with the re-ignited Alley Cats and old-school collective Carnage Asada (another band whose early lineup included Cadena in its ranks). On Sunday, November 22, we’ll see the first appearance by the Tourists – which featured a pre-Red Cross Steven and Jeff McDonald and pre-Circle Jerks/ Bad Religion Greg Hetson – since they performed at the infamous Polliwog Park show in 1979 where picnicking families threw their lunches at Black Flag. Keith Morris, who was handling the mic for Black Flag that afternoon, will also appear, along with the Rikk Agnew Band, Cadena’s DC3 partner and keyboard king Paul Roessler, Backbiter, PRV13 and Landfill. Tickets for both days are now available for $20, and selling fast. With Dezo in the room – even in spirit – expect a friendly vibe in the room and raw intensity from the stage.

From the Cafe Nela Events page: