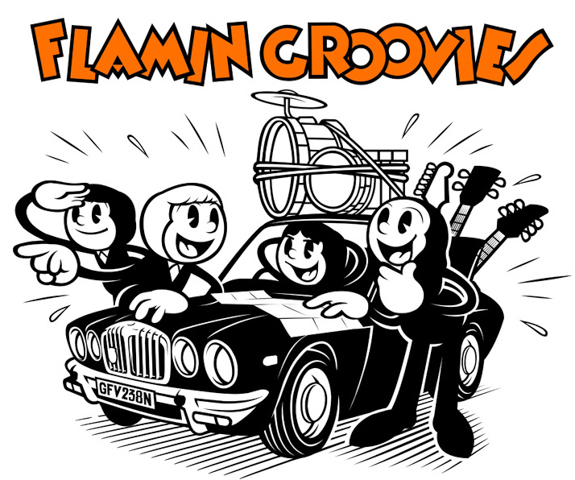 Fans of early 70s proto-punk/ power-pop  have long known the pleasures of San Francisco’s Flamin’ Groovies. “Shake Some Action”, “Slow Death” and “Teenage Head” are on the short list of period tracks as universally revered as Stooges records or Rocket From The Tombs bootlegs, despite their obscurity outside the record collector cult. But thanks to the occasion of their fiftieth anniversary, the general public will finally get their shot to find out about all this raw-guitar gloriousness, with the planned 2016 release of a new documentary,  and a new studio album. Live shows by the revitalized band have been happening sporadically since 2012, and one of those will be taking place at the Bootleg Theater on November 28. Members of the classic 1971-80 lineup Cyril Jordan, Chris Wilson and George Alexander are all there, with new kid Victor Penalosa on drums. If there’s any band ripe for re-discovery in a big way, it’s this one, so godspeed to them.

It would come highly recommended even if the Zeros weren’t on the bill, but since they are, consider it one of this fall’s totally unmissable events. Not to be confused with the purple-haired goons of the same name, the REAL Zeros are from the front lines of LA punk, circa 1976. and creators of their own memorable, highly coverable classics like “Beat Your Heart Out”, “Wimp”  and “Don’t Push Me Around.” Fronted by Robert Lopez, aka El Vez, they are a SoCal treasure and still a great live band  – one we don’t get to see nearly enough, so make it a point to catch this one.