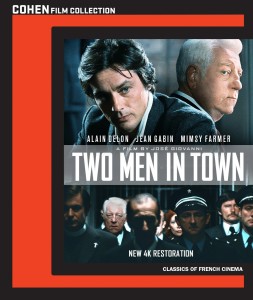 (1973, Cohen Media Group) Melancholy French noir about redemption and fate, with Alain Delon as a former bank robber freed from prison through the intervention of social worker Jean Gabin, who believes that the younger man has paid his debt to society. When Delon’s freedom is threatened after a run-in with his old gang (which includes a youthful and greasy Gerard Depardieu), Gabin dispatches Delon to the south of France, where he pursues the straight and narrow with a 9 to 5 job and a new girlfriend (Mimsy Farmer from “More”). This being a crime picture, trouble is around the corner, but not from the criminal element; rather, it’s a hardnosed policeman (Michel Bouquet) who refuses to believe that Delon has changed his ways and pushes him to an inevitable confrontation. Written and director by Jose Giovanni, who drew from his own lengthy career as a criminal for this film and writing/directing assignments on French thrillers like “The Hole” (1960) and Jean-Pierre Melville’s “Le Deuxieme soufflé” (1966), “Two Men in Town” isn’t as memorable as “The Sicilian Clan” (1969), his previous collaboration with Gabin and Delon, it benefits from the presence of its leading men, who lead a great deal of emotional weight to its core argument against the French government’s hardline attitude towards prisoner reform, as well as an abundance of gritty setpieces expertly staged by Giovanni. The Blu-ray offers the 4K restored print issued by Pathe in France, as well as an informative but sporadic commentary by Gabin scholar Charles Zigman. An American-French-Belgian remake, with Forest Whitaker, Brenda Blethyn and Harvey Keitel in the Delon/Gabin/Bouquet roles, was released in 2014. 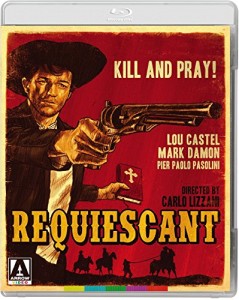 (1967, Arrow Video) A young boy, the sole survivor of a massacre carried out by the malevolent landowner Ferguson (Mark Damon), grows into a young man (Lou Castel) with a deadly pistol hand and a penchant for praying over the bodies of his opponents, earning him the nickname “Requiescant,” or “rest in peace.” The presence of filmmaker Pier Paolo Pasolini as the traveling priest that helps to raise Requiescant informs the intentions behind this offbeat Western by Carlo Lizzani; like the “Teorema” and “Salo” director, Lizzani – an Oscar-nominated writer, as well as a significant figure in the development of the neorealist movement – employs an array of tones, from broadly humorous to macabre and tragic, and styles (extreme realism to semi-parody) to comment on socio-political issues, most notably the exploitation of the agrarian class (Requiescant’s family) by capitalist outsiders (the sepulchral Ferguson, a Southerner with romantic notions on slavery and the Reconstruction) and the role of the Roman Catholic church (as embodied by Pasolini) in fomenting an insurrection, notions explored in a host of other socially conscious Italian Westerns, including “Bullet for the General” (which inspired Pasolini to take this role) and the Westerns of Sergio Corbucci (“The Professional,” “The Big Gundown”). If that reads too academic for you, rest assured that “Requiescant” also has plenty of action and offbeat humor (Castel’s turn as the good-natured naïf turned crack shot is amusing), a great score by Riz Ortolani (“Day of Anger”) and some impressive set pieces, including a striking standoff between Castel and Damon’s vicious henchman (Carlo Palmucci), who draw on each other while standing in stools with nooses around their necks (a scene later adopted in “The Good, The Bad and the Ugly”). Arrow’s Blu-ray includes a new interview with Castel, who discusses the influence of Chaplin on his performance, and a lengthy archival conversation with Lizzani (who died in 2013), who details the scope of his storied career, as well as his work as a critic and documentarian. 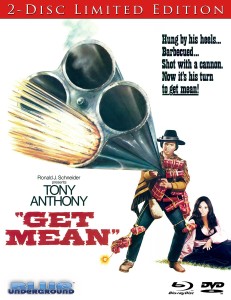 (1975, Blue Underground) “Requiescant” may have its share of eclectic moments, but it can’t hold a candle to this full-tilt gonzo adventure, which marks the final screen appearance of Tony Anthony’s wisecracking anti-hero, the Stranger. Having survived a vicious bandit (“A Stranger in Town”), a bona fide psychopath (“The Stranger Returns”) and warring samurai (“The Silent Stranger”), “Get Mean” finds Anthony’s Stranger dragged through the desert (actually Almeria, Spain) by his own horse before encountering a family of gypsies who hire him to escort a princess (Diana Lorys, also in “Bad Man’s River” – see below) to her ancestral castle in Spain. Once there, the Stranger is caught between an army of Moors loyal to her crown, and Viking-style barbarians (!) with designs on the kingdom. The Stranger loses the princess in the fray, of course, and gets hung from his heels for his pains; he experiences an additional array of indignities (roasted over a spit, shot with a cannon) and goes briefly and barkingly mad in a haunted Sufi temple before deciding that the best course of action is to introduce his opponents to his unique brand of problem solving, which involves a lot dynamite and his four-barreled shotgun from “Silent Stranger.” From that description – which scrapes only the surface of the lunacy in “Get Mean” – it should be evident that star/writer Anthony and director Ferdinando Baldi are not in the least bit interesting in delivering a standard-issue Italian Western, or standard-issue movie of any kind; what they’ve created instead is a rollicking, tongue-in-cheek, quasi-mystical meta-action-comedy – in short, like “El Topo” as directed by Frank Tashlin (though a more modern analogy might be Sam Raimi’s “Army of Darkness,” which also features an anachronistic wisenheimer hero with an equally high tolerance for abuse who’s also trapped in a medieval setting). As with the other “Stranger” films, diehard Eurowestern fans may deplore “Get Mean” for its slapstick elements, but it’s hard not to admire Anthony and Baldi for attempting to invigorate (maybe electroshock is the right word) the subgenre with some modern attitude as it spiraled into obscurity in the mid-1970s; they might have accomplished it, too, had production and distribution problems not poleaxed the picture before it got to theaters. Blue Underground’s Blu-ray/DVD combo set rescues “Get Mean” from grey market oblivion with a terrific restored presentation and loads of extras, including commentary by and anecdote-laden interviews with Anthony (who discusses all four films in detail), Baldi, co-writer/co-star Lloyd Battista and producer Ronald Schneider, whom music fans might know better as the nephew of Allen Klein (who produced the first three “Stranger” pics) and a key figure in the finances of the Beatles and Rolling Stones in the late ‘60s. Deleted scenes, U.S. and French trailers, and a gallery of posters and images (including original ad mockups and even the production contracts) round out this terrific set. 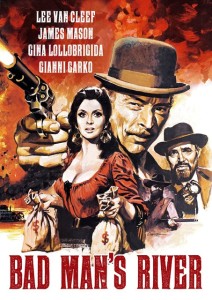 (1971, Kino Lorber) Most Western comedies from Europe are rough going for viewers, and this Italian-French-Spanish feature, penned by blacklisted Oscar winner Philip Yordan is no exception, though it benefits from its international cast, who do their best – more or less – to make palatable the film’s many rocky patches. Lee Van Cleef is top-billed as a bank robber who loses his latest haul to a comely con artist (Gina Lollobridgida), and spends the remainder of the running time committing iterations of the same mistake, albeit with bigger risks and money losses. The film’s central heist is engineered by Lollobridgida’s husband (James Mason), a revolutionary in the guise of a government agent, and involves Van Cleef and his gang destroying a Mexican Army arsenal and then bilking the military for the loss; the execution of the scheme, and subsequent pursuit of the gang by the army is well-handled by director Eugenio Martin (who also helmed “Horror Express” for producer Bernard Gordon), and makes up for his overuse of the freeze frame to force laughs during slapstick moments. The score by Waldo de los Rios (“Who Can Kill a Child”), which veers from orchestral sweep to a Five Neat Guys-style male chorus, is another hurdle to overcome, and many Italian Western fans may not want to see Van Cleef (avec toupee) playing middle-aged meet-cute with Lollobridgida, but there’s enough action to make “Bad Man’s River” an agreeable way to pass the pre-dawn hours. Also starring spaghetti Western vets Gianni Garko, Eduardo Fajardo and Aldo Sambrell, all swinging for the fences in broadly comic turns, and Spanish actor Simon Andreu; the anachronistic title track is by UK psych/prog vets Jade Warrior, who apparently weren’t happy with the end results. Kino Lorber’s Blu-ray includes trailers for Van Cleef in “Sabata” and “Barquero,” with Warren Oates. 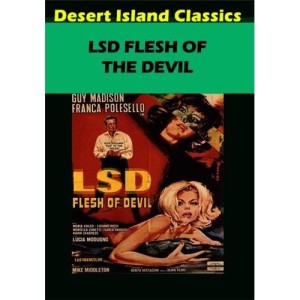 (1967, Desert Island Discs) Despite its lurid title, this Italian feature is really a Bond-style spy caper, albeit one about a plot to overthrow world powers with LSD. Desert Island’s disc features an Italian-language dialogue track with no English option or subtitles, so I was forced to rely on outside sources (and two years of high school Latin) to make what little sense I could out of the proceedings. To the best of my knowledge, “LSD: Flesh of Devil” (onscreen title: “LSD: Hell for a Few Dollars”) concerns a sinister crime syndicate, overseen by Signore X (Eurotrash staple Adriano Micantoni), an unmitigated sadist who plans to disrupt major European centers by dosing their government and military with potent psychedelics. Secret agent Rex Miller, played by Guy Madison, is assigned to thwart his plan, and after having a recording device implanted in his neck (which is shown in detail), Rex infiltrates X’s lavishly appointed organization and appears to upend his scheme. How this is accomplished is not made particularly clear; Madison, a former star of Westerns on American TV and movies before heading to Italy as his career waned, gives a leisurely, dad’s-on-vacation performance that makes Dean Martin’s turn as Matt Helm seem positively caffeinated, and his defeat of X’s organization appears to come about through moderate perseverance and catching the occasional beatdown from his swarthy associates. This being a movie about LSD, there are a handful of “freakout” showcases for the actors to sweat and writhe and, in one case, throw themselves out the nearest open window; their hallucinations, in which faces are replaced by monster masks, bird heads and a rose in full bloom (!), nicely evoke the budget delirium of American acid pics like “Psych-Out” and “The Love-Ins.” The lack of an English track or translation may ward off some viewers, but for me, the extra layer of obfuscation only heightened the surreal viewing experience; I can’t imagine anything that was said that can rival what you hear in your own head.

Programmer’s Notes: Desert Island also has the wonderfully titled “Bastards, Go Kill Chaco” (a.k.a. “Bastard, Go and Kill”), a by-the-books Italian Western from 1971 with colossal George Eastman on the revenge trail and a script by exploitation expert Sergio Garrone (loads of Westerns and Nazisploitation titles), and “Dirty Fingers” (1973), a murky (both in terms of story and visuals – the screen image is very dark) Swedish crime drama about a photographer in pursuit of the villainous drug lord who caused his sister to die of an overdose. Either will do as a substitute for any of the above-mentioned international dust-ups, should your local DVD/streaming provider not carry them.

Paul Gaita lives in Sherman Oaks, California with his lovely wife and daughter. He has written for The Los Angeles Times, LA Weekly, Variety and The Fix, among many other publications, and was a home video reviewer for Amazon.com from 1998 to 2014. He has interviewed countless entertainment figures from both the A and Z lists, but his favorites remain Elmore Leonard, Ray Bradbury and George Newall, who created both Schoolhouse Rock and the Hai Karate aftershave commercials. He once shared a Thanksgiving dinner with celebrity astrologer Joyce Jillson, and regrettably, still owes the late character actor Charles Napier a dollar.
View all posts by Paul Gaita →
This entry was posted in Movies and tagged Arrow Video, Blue Underground, Cohen Media Group, Desert Island Discs, Kino Lorber. Bookmark the permalink.