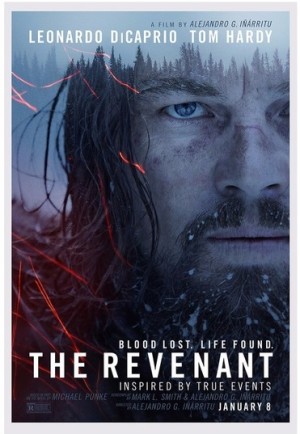 And then things start to get ugly.

Directed by acclaimed Mexican director Alejandro G. Innaritu (“Birdman”), “The Revenant” is adapted from the Michael Punke novel of the same name. It is a revenge story set in 1823, based on the real life experiences of American fur trapper Hugh Glass (portrayed by Leonardo DiCpario), and takes place in the wilderness of the Dakotas.

Glass, along with his Pawnee son, Hawk, is part of a group of hunters and trappers, led by Captain Andrew Henry (Domhnall Gleeson). When the party is attacked by Arikari Native Americans, the survivors of the party flee, gathering up what pelts and supplies they can. While separated from the party, Glass encounters bear cubs, unaware that their enraged mother is standing directly behind him. The bear attacks him and Glass is brutally mauled. As the bear retreats, Glass reaches for his rifle. Bad move – she lunges back towards him for a second attack. He manages to shoot her, and plunges his knife into her as she falls towards him, but he is practically dead by this point as he rolls down the hill. To add insult to injury, the bear’s huge body also rolls down the hill, landing directly on top of him. 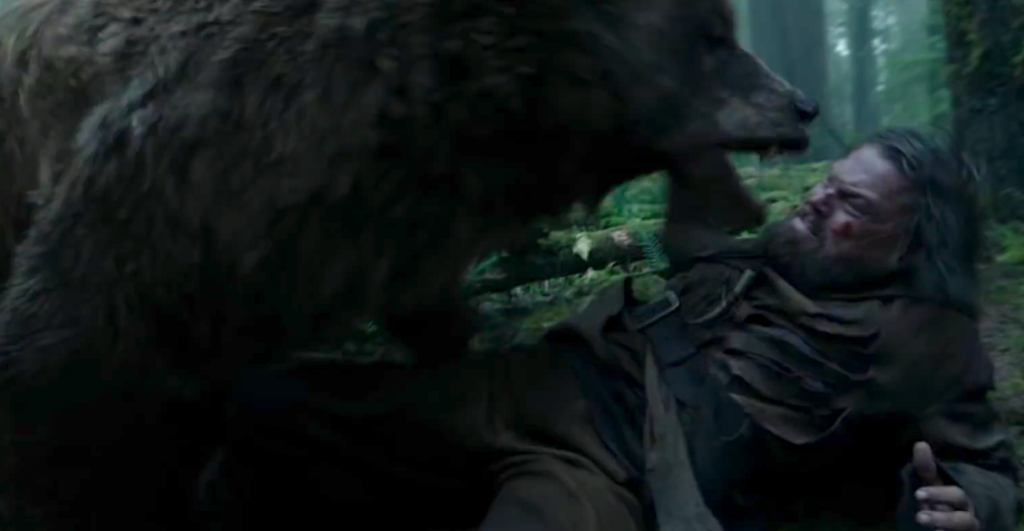 The other men find Glass, and manage to roll the bear off of him. They construct a crude stretcher, perform what limited medical care they can, and carry him off. The trappers debate what to do with him. Should they carry him along? Kill him and put him out of his misery? He’s the only man who really knows the way back to the fort, and invaluable to the party. Glass’s nemesis, Fitzgerald (played by Tom Hardy), who earlier made insulting and threatening comments towards Glass’s Native American son, is all too eager to have him shot. He urges Captain Henry to kill him; however, Henry, looking into Glass’s eyes, can’t bring himself to pull the trigger. Henry offers an award to anyone who will stay behind to take care of Glass. Fitzgerald offers, as well as Glass’s son, Hawk, and another boy, Jim Bridger.

Once Fitzgerald is alone with Glass, he attempts to smother him. Hawk returns to the scene and, seeing Fitzgerald’s abuse of his father, angrily confronts him. A struggle ensues; Glass, unable to move or speak, watches helplessly as Fitzgerald sticks a knife into the boy. When Jim Bridger comes back to the scene and asks about Hawk, Fitzgerald lies to him, telling he doesn’t know where he is; he also tells him that he saw Indians nearby and they must flee. He convinces a reluctant that they must leave Glass behind, or perish themselves.

Abandoned, fueled by rage and anguish, Glass manages to crawl over to his son’s body, whispering to him, “I will not leave you.” He places a flower on the lips of his son in an apparent ceremonial gesture. For the remainder of the film, Glass seeks to avenge his son’s death while dealing with both the forces of nature and man. He is eventually able to walk again and, though still critically wounded, is able to hunt for food. Along the way, he saves a young Native American woman from being raped, and befriends a Pawnee Native American who was also abandoned by his people; he ultimately catches up to his party, who are shocked to find him still alive, and a manhunt follows for Fitzgerald.

In a way, “The Revenant” resembles a classic western – frontiersmen and Indians do battle, and there is a clear-cut villain, Fitzgerald. But, unlike an old-fashioned western, it is relentlessly brutal and graphic. The screen heroes of old didn’t have to endure the kind of torture nature dishes out to Glass. Upon conquering one obstacle, he’s immediately faced with another; it almost becomes darkly humorous in its absurdity. I constantly wondered what horrible thing would happen to him next.

The only relief from the brutality (for both DiCaprio’s character and the audience) are the dreamlike flashback scenes to happier times, when Glass’s Native American wife (from the Pawnee tribe) was still alive. The scenes appear to be filmed in natural light, in the orange glow of dusk. We see their teepee homestead, and Hawk as a young boy playing in the fields. These scenes offer a brief, soothing respite from the violence, for both DiCaprio’s character and the audience. We hear his wife’s voice whispering to him as he trudges through the wilderness; she also appears to him in visions, hovering over him in a field, or standing near, smiling, watching him.

In addition to dealing with grueling conditions during the shoot, and going above-and-beyond any typical demands for actors (that really looked like Leonardo floating down the icy river, not a stunt double), DiCaprio’s acting prowess is at its peak in this film. During the scene when Fitzgerald murders Hawk, the agony on DiCaprio’s face is painful – he sputters and froths at the mouth, unable to move or scream or to save his son.

Innaritu’s directing style might be described as “uncomfortable.” Though a winter wilderness is about as far as one can get from the backstage of a Broadway theater, both films have a nervous, driving energy, as well as lead characters who are suffering greatly in their own ways. “The Revenant” is at times driven by the music of Ryuichi Sakomoto. Though Sakomoto’s score is not as demanding on the senses as the relentless pounding drums in “Birdman,” it can dictate the scene; Glass’s final struggle in the snow with Fitzgerald, accompanied by discordant strings, is one example.

By the end of “The Revenant,” one might be longing for the neurotic backstage hallucinations of “Birdman.” At least there is food, warmth and water. And no bears.

Carolyn Soyars is a freelance writter/blogger and musician, who performs under the name Carolyn Edwards. She has played with such critically acclaimed bands as 3D Picnic and The Negro Problem, and performs traditional folk music with her husband, Dave Soyars. For more info., see www.carolynsoyars.com for writing, and www.carolynedwards.com for music.
View all posts by Carolyn Soyars →
This entry was posted in Movies and tagged Birdman, Leonardo DiCaprio, The Revenant. Bookmark the permalink.