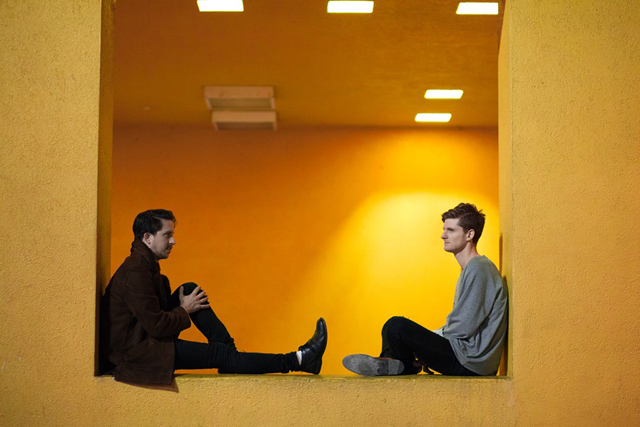 StaG are an intriguing local band consisting of childhood friends Matt McGuire and Will Walden, who met in a tee-ball league. There’s an odd story behind the duo’s name that seems relevant to the lyrical theme of their upcoming album Don’t Check Out (based on the title and one of the singles): StaG stands for “Stanwix’s accidental gun”, referring to Herman Melville’s claim that his son Malcolm was accidentally shot by his other son Stanwix, instead of committing suicide as it appeared.

According to a press release, the title track of Don’t Check Out was written by McGuire on an extremely sad night, and was inspired by a scene from Leos Carax’s “Mauvais Sang” (“Bad Blood”, aka “The Night Is Young”), which I’ve never seen but looks interesting. The full album – out independently on February 26th – is a “bald, painful, emotional, silly, and rhythmic grouping of songs that takes us through the loneliness that comes with adult life.” I hope they hang in there.

The two singles on their Soundcloud are surprisingly uplifting, musically. “Colorado – Suicidal” reminds me a bit of Animal Collective, due to its jarring, mechanical rhythm and quirky guitar on the chorus. It’s quite a good song. “I Don’t Belong Here” is both poppier and a little funkier, with a sunny, sing-a-long chorus. McGuire’s nasal voice might not be for everyone, but StaG definitely have an interesting sound. They just played The Echo last Wednesday, but keep an eye out for their next show.

Info from Tell All Your Friends; Image by Julien Garros

Simone Snaith writes young adult and fantasy novels, and sings in the band Turning Violet. A fan of scifi, fantasy, the supernatural and most things from the '80s, she enjoys reviewing music, books and movies. You can read about her own books at simonesnaith.com.
View all posts by Simone Snaith →
This entry was posted in Miscellanious, Music and tagged don't check out, herman melville, indie rock, local bands, mauvais sang, so many good local bands so little time, StaG, Suicide. Bookmark the permalink.