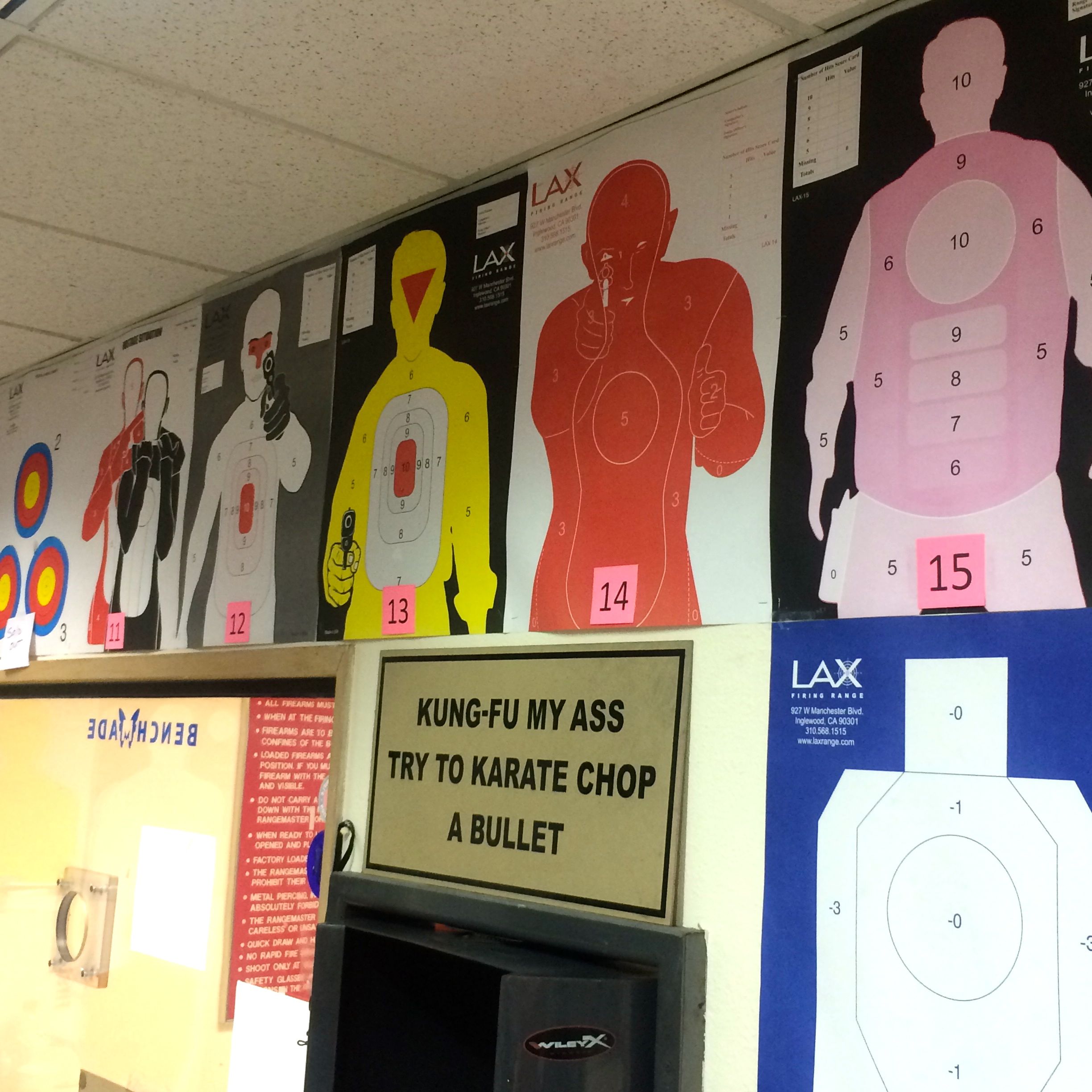 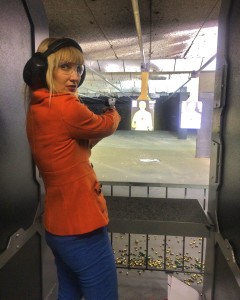 Guns are a hot topic. Tied to political rhetoric about what so-called freedom represents, involved in innocent deaths and an idea of self-protection, their mere availability or threat of denial can cause the bitterest of arguments. I had never shot a gun, or even held a real one in my hands. I’d faked it for TV show roles, however, and run around shooting costumed zombies with an air soft gun. I have to admit, I was curious. Yes, I am a liberal with definite views on the availability of guns in this country. Do I want one for myself? I have to say that I do not. But I was very interested in having the gun shooting experience in a controlled environment. I went to LAX Firing Range in Inglewood to find out what all the hubbub is about. By merely partaking in this adventure and posting photos, I sparked both sides of the gun controversy from decades old Facebook friends and Instagram followers alike. 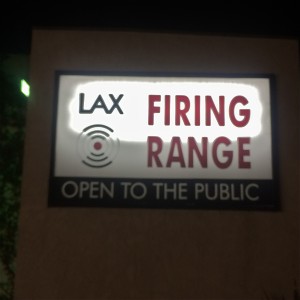 LAX Firing Range, located conveniently near the larger than life L.A. icon Randy’s Donuts, is quiet from the outside. A simple sign reveals what the inside holds, but that was hardly enough preparation for a newbie, like me. I looked on this as an adventure… like rollerskating. My naivety was quite profound. Here in this country, guns are such a major part of popular culture that I thought, “Easy peasy. I pull the trigger and shoot. What fun!” It wasn’t until I entered the shop, gave the guy at the counter my driver’s license and filled out forms telling them I had no mental illness or criminal record, signing away the range’s liability if I was hurt, that this started to become real. 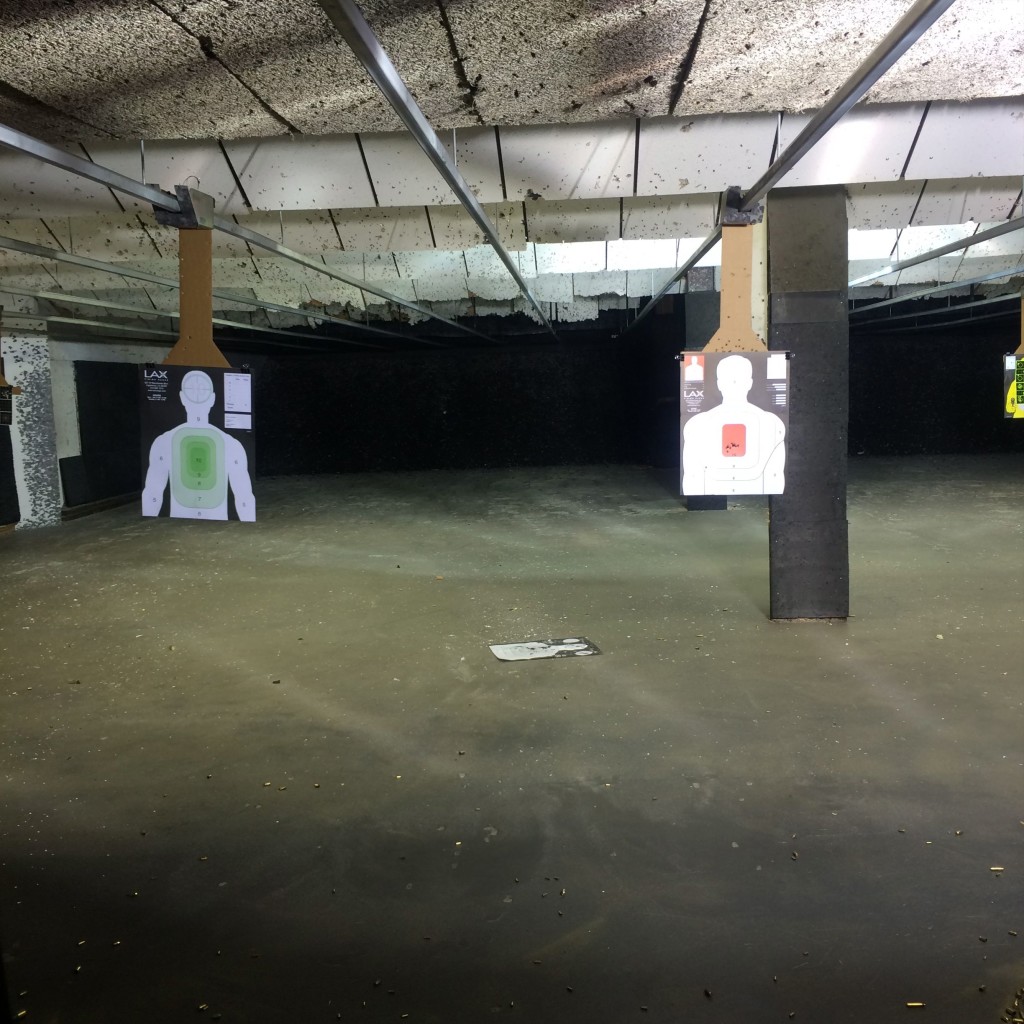 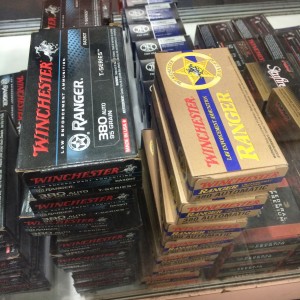 My friend, Erin and I were given a gun and a bag of bullets in a red plastic carry crate. Walking with them out onto the shooting range, I suddenly felt extremely vulnerable and scared. It dawned on me, finally, that these things kill and are not a toy. I realized that anyone in the firing line could potentially aim their gun at me and I would be gone in the blink of an eye. It had all been a lark just a minute ago. Still, I had signed on for this experience and was ready to see it through. We were shown once by the busy gun shop clerk how to load our weapon and given a brief safety rundown. Neither of us absorbed all of the information properly and stood there holding our gun and bullets feeling rather helpless. 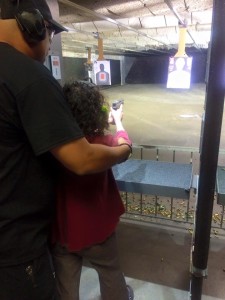 Erin gets instruction from Levon (photo by Nikki Kreuzer)

Luckily, a man named Levon, a good samaritan and expert marksman, who had been training for some time as a student at this range, came to our rescue. He stayed with us, guiding us, helping us load, giving us tips on how to aim and what to do. He was an excellent teacher; kind, patient and knowledgeable. My first shot was in such a whirlwind of adrenaline that I forgot afterward about the basic safety rule of keeping the gun pointed toward the range. Oops! This was fun! What a rush! Under Levon’s instruction I was a decent shot too, often hitting precisely where I aimed on the target. Erin, also, took to the adventure quite naturally, though we both needed Levon’s assistance until the very end. I truly enjoyed my shooting range experience and honestly found the whole thing invaluable in my understanding of this major controversy in our country. Feeling the cold steel between my hands and coming face to face with a gun’s power in all of its intensity made quite a dramatic impact. Would I shoot at a range again? Of course. Have I changed my mind about feeling safer if I owned a gun myself? I’m sorry, I haven’t. 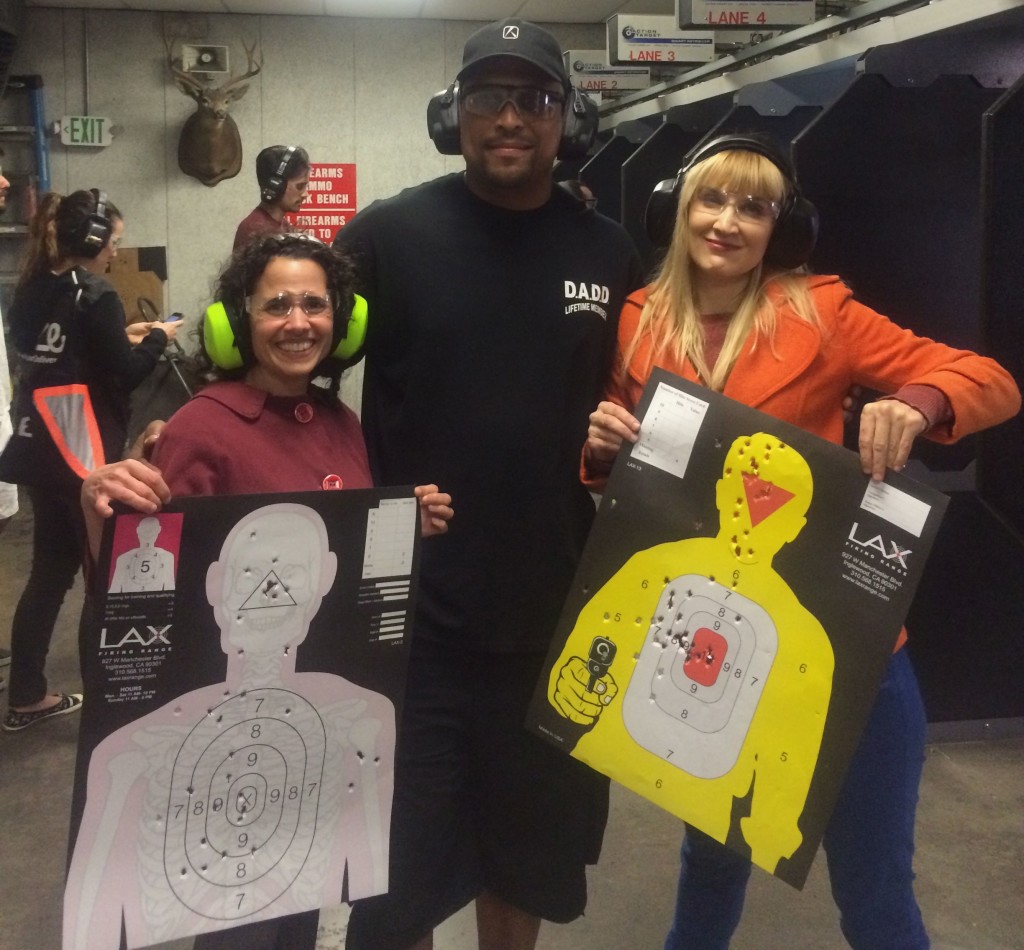 Erin, Levon and me with our final targets 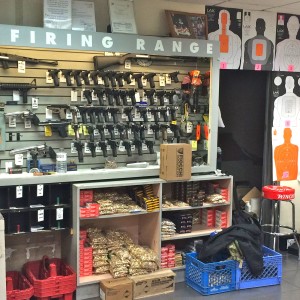 Nikki Kreuzer has been a Los Angeles resident for over 30 years. When not working her day job in the film & TV industry, she spends her time over many obsessions, mainly music, art and exploring & photographing the oddities of the city she adores. So far she has written 110 Offbeat L.A. articles, published at the Los Angeles Beat. As a journalist she contributes regularly to LA Weekly, Blurred Culture and The Los Angeles Beat and has also been published by Oddee.com, Twist Magazine, Strobe and Not For Hire. Nikki is also a mosaic artist, radio DJ and published photographer. Her photography has been featured in exhibit at the Museum of Neon Art, in print at the LA Weekly and is part of an upcoming show at the Neutra Museum in Los Angeles. She has recorded with the band Nikki & Candy as bassist, vocalist and songwriter, directing and appearing in the 'Sunshine Sunshine Santa Claus' music video for the band. She co-hosts the monthly radio show Bubblegum & Other Delights on Dublab.com. Her acting credits include a recent role in the ABC-TV show 'For The People', 'Incident at Guilt Ridge', 'Two and a Half Men', the film 'Minority Report' and 'Offbeat L.A.', a web series, written and hosted by Nikki Kreuzer. Her writing, radio and video portfolio can be found at OffbeatLA.com, her photography work @Lunabeat on Instagram and her music history posts @NikkiKreuzer on Twitter. Find Nikki & Candy music on iTunes, Amazon or at NikkiandCandy.com.
View all posts by Nikki Kreuzer →
This entry was posted in Attractions, Miscellanious, Offbeat LA and tagged Guns, LAX Firing Range, Nicole Kreuzer Offbeat LA, Nikki Kreuzer. Bookmark the permalink.