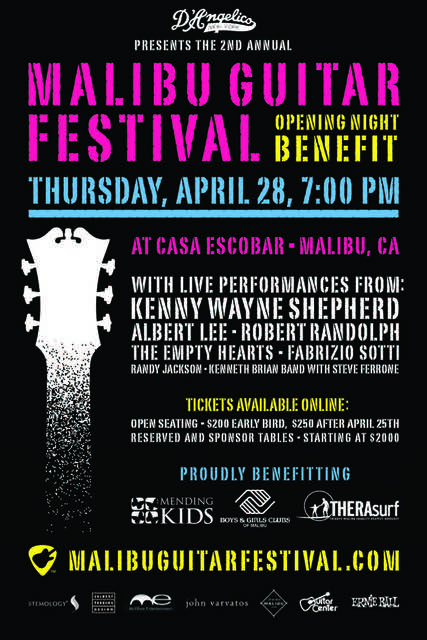 This weekend starts early in Malibu for music and “guitar” fans! This year’s 2nd Annual Malibu Guitar Festival, presented by D ‘Angelico Guitars will be 4 days of guitar playing mayhem and magic starting Thursday, April 29th and running through Sunday, May 1st. The festival is the brainchild of partners Doug Deluca and John Watkin, who are both avid music fans. Doug Deluca is co-executive producer Jimmy Kimmel Live. John Watkin was executive producer for The Rosie O’Donnell Show. It was their mutual passion and connection to music that has led to them bringing this music festival to the shores of Malibu. Also, Steve Ferrone, drummer for Tom Petty And The Heartbreakers, was tapped to become the festival’s Music Director. The idea behind the festival is to bring a world class music festival to the seaside town and it’s designed to support charities, while it will also showcase local musicians. There’s tons of artists who will play the festival, those who are immediately recognizable to everyone and then for those who want to go deep, for those who are guitar enthusiasts and aficionados desiring to experience technique and virtuosity. Here are a few of the individuals and bands that will set this weekend on fire: Kenny Wayne Shepherd, Robert Randolph, The Empty Hearts (A super group composed of members of Blondie, The Romantics, The Cars and The Chesterfield Kings), Fabrizio Sotti, Laurence Juber (Guitarist of Wings), Randy Jackson, Steve Ferrone, Kenneth Brian Band, Dale Watson, Albert Lee, Orianthi and Richie Sambora (Bon Jovi). It’s going to be a power packed weekend for sure!

More After The Break

Thursday night’s kick-off and fundraising benefit for 3 charities will be held at Casa Escobar. There will be a dinner and silent auction with performances by: Kenny Wayne Shepherd, Albert Lee, Robert Randolph, The Empty Hearts, Fabrizio Sotti, Laurence Juber, Randy Jackson, Steve Ferrone, Kenneth Brian Band. In addition of the performances there will be a photo exhibit by renowned rock photographer Robert Knight and his creatve partner Maryanne Bilham. Those attending the event festivities will be benefiting Mending Kids, THERAsurf and Boys and Girls Club of Malibu charities. The performances are slated to conclude at 12 midnight. 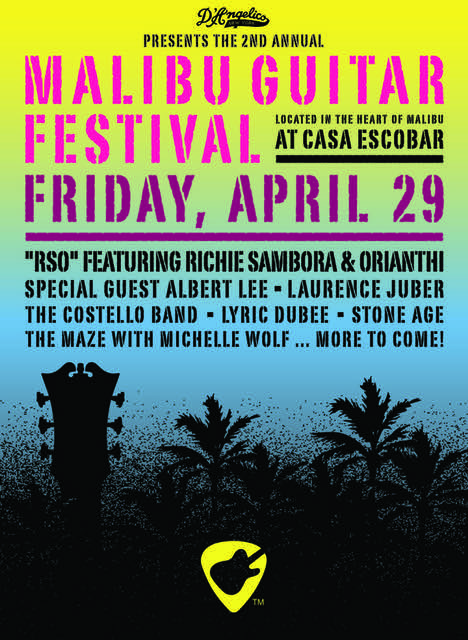 Friday night starts at 9pm at Casa Escobar with arstis: RSO featuring Richie Sambora and Orianthi with special appearances by Albert Lee, Laurence Juber and The Maze with Michelle Wolf.  These performances should conclude by 1am. 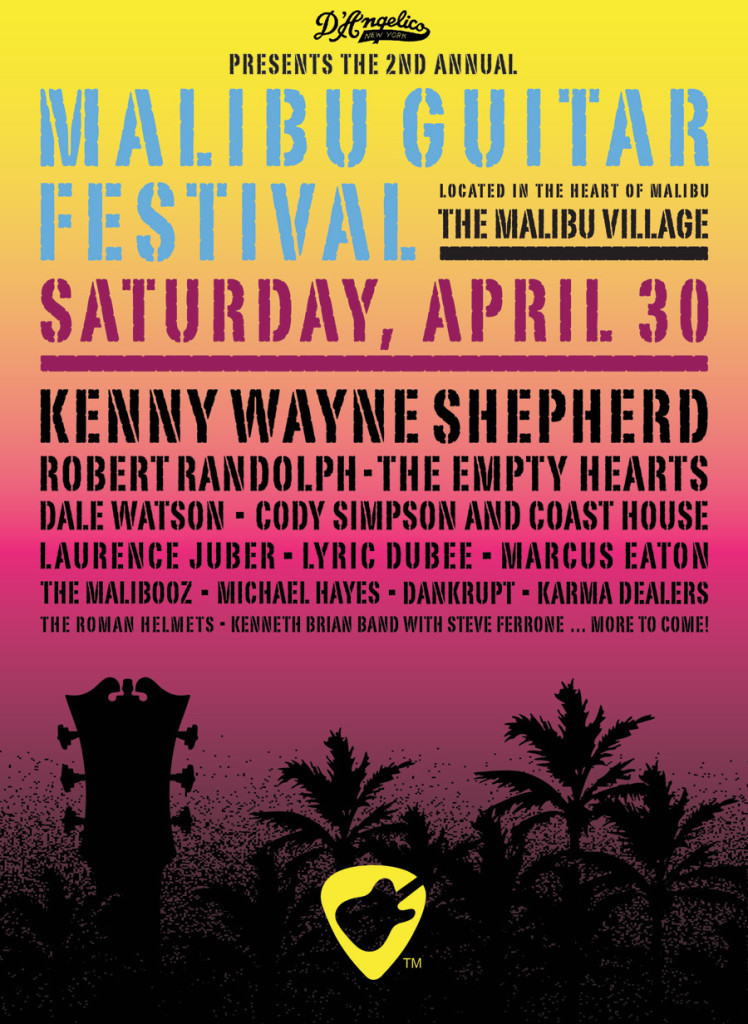 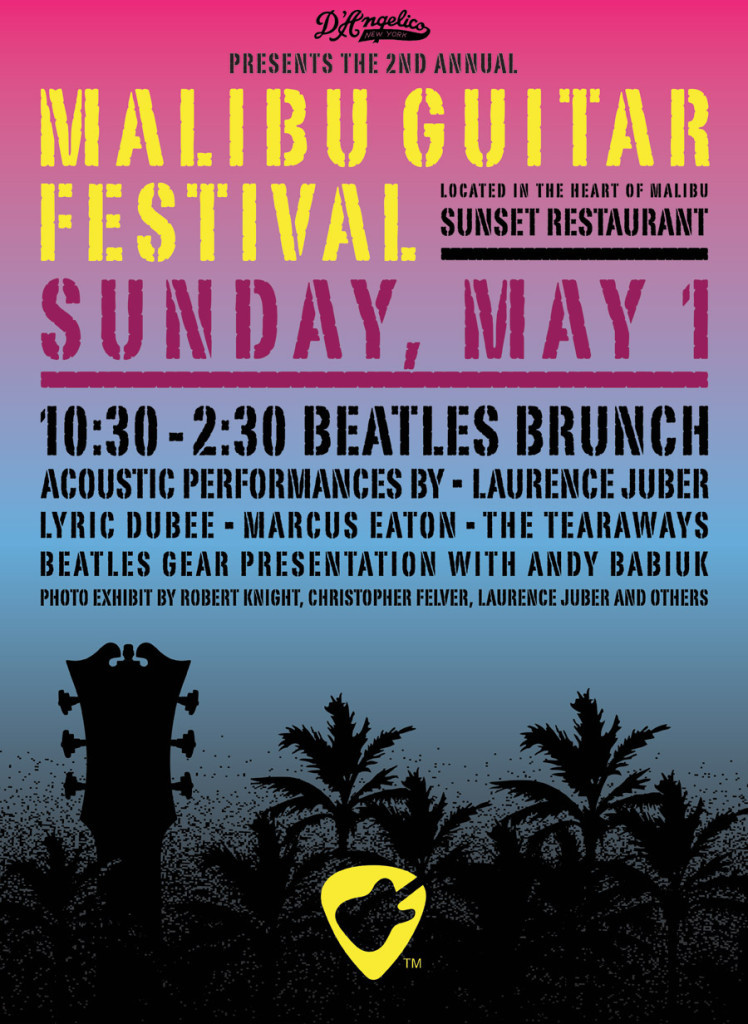 The Sunday kick-off starts at 10am with a Beatles Brunch at the Sunset Restaurant located in the heart of Malibu. To be featured is a special “Beatles Gear” presentation by author and musician, Andy Babiuk. Andy Babiuk book gives a detailed account of how The Beatle’s made their music, detailing exactly which guitars, drums, amplifiers and keyboards were used at key points of their career. For any gearhead and The Beatles fan this is an exceptional opportunity to get “The Deets” or the 411 and fire off some questions. Andy Babiuk’s the book will be availible for purchase as well. Besides Babuiuk’s presentation the will be Wing’s guitarist Laurence Juber‘s performance of Beatles songs and Robert Knight featuring exclusive photos of Paul McCartney and Ringo Starr, among others exhibited. This should all conclude by 3pm on Sunday afternoon and here are the times the artist are scheduled to play: 10:30 a.m. Daniel Paige, 11 a.m. The Tearaways, 11:30 a.m. Fabrizio Sotti, 12 noon Beatles Gear presentation with Andy Babiuk, 1 p.m. Laurence Juber w/Lyric Dubee and at 2 p.m. Brunch closes. Doug DeLuca put it well regarding the Malibu Guitar Festval by saying, “The iconography of the guitar and the backdrop of Malibu are a perfect combination for this beautiful event inspired by a passion for music and a love of community.” This weekend should be a total blast! 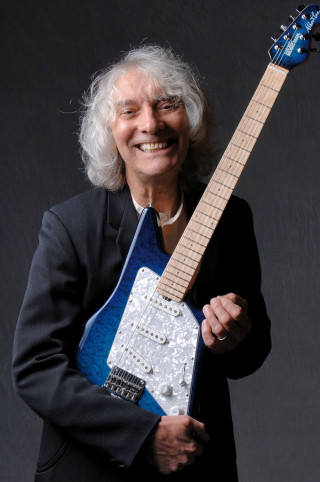 Albert Lee was good enough to share a few words and was Dale Watson in regards to their performances at this year’s 2nd Annual Guitar Fest. Albert Lee will be playing Thursday and Friday evenings. Here is his thoughts on his performance: “I mix it up quite a bit and it always goes down well. I like good songs and there are many to choose from. I do a couple of my own and others by my favorite writers. There will be no lack of guitar in the show and I’ll also surprise a few people by featuring the piano. I used to be in a band named Head Hands and Feet in the early 70s, our press was handled by Bobby Cowan, is this the same person?

Many thanks,  Albert Lee

Here’s my interview with Dale Watson who will be playing Saturday.

LA Beat: What should we expect from your set?

DW: Since it’s a guitar aware crowd , I’ll likely try to do uptempo songs with a lot of attention to guitar licks.

LA Beat: Will there be a focus on the old or new material?

DW: I never consider it old or new as I don’t think music has an expiration date,ha. But, I understand what you mean. Since I’ll concentrate on guitar heavy uptempo songs I will jump all over my catalog, old and new.

LA Beat: Will you be breaking in any new songs?

DW: I always do new songs I write. The newest which I’m sure I’ll do is “ Gonna Keep On Doin What I Shouldn’t Do” 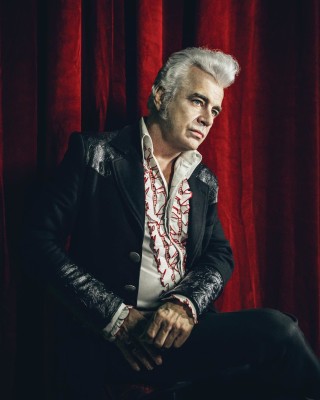 LA Beat: What is the state of real Country music?

DW: State of Denial. Country Music has the name Country but that identity has long been lost. It has more in common with Hip Hop and Pop than any of it’s roots. It’s like a snake that’s eating it’s tail and I suppose one day it will just have to stop and not exist. That day is nigh.

DW: I would be inclined to agree with 3, but I have to honestly say it ( Ameripolitan, what Country USED to be) is alive and well all over the world. It’s just not nurtured. That’s what we want to do with the Ameripolitan Awards. Ameripolitan Awards Show happens every year in Austin the second Tuesday of February and it awards the living Legends ( last year we awarded Charley Pride) as well as the newest brightest artist that play original music with prominent roots.

LA Beat: You and Hank III, seem to feel passionately about real Country, who are some of the others you believe are holding those standards high?

LA Beat: By any chance will Rosie Flores be joining in the festivities?

DW: I hope she is booked but I don’t know.

LA Beat: Do you feel you’ll be bringing a little bit of Austin to Malibu with your show?

DW: It can’t be helped. Austin is a part of me as much as breathing.

LA Beat: Do you think there any chance of making Malibu “Austin Weird” during your set?

DW: ha, the fact that my music is there in contrast to the other great artist, my set will likely have folks tilting their heads and thinking, “ What The….?”

All I have to say is, Party on Malibu!