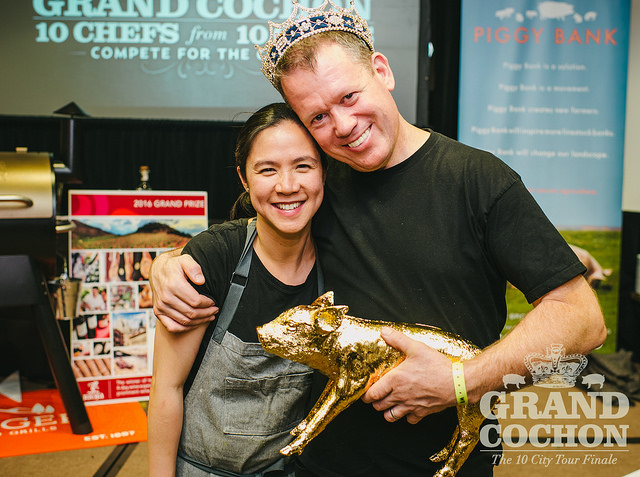 Cochon 555 is a nationwide event that sponsors competitions for local chefs who must prepare 6 dishes using a single heritage pig. The winner of Cochon 555 Los Angeles for the last two years in a row has been Walter Manzke of Republique. The annual competition culminates with the winners from the participating cities going head to head at Grand Cochon The Viceroy Snowmass in Aspen  for the prized title of “King or Queen of Porc.”

This year ten chefs competed for the crown at the Grand Cochon. 20 celebrity judges, including Andrew Zimmern, Tyler Florence, and Mike Isabella, along with attendees, crowned LA’s two time winner, Walter Manzke of Republique, the 2016 King of Porc. Besides bragging rights, Chef Manzke won a trip to Spain and a host of other prizes from sponsors like William’s-Sonoma.

Adjunct competitions include sommeliers and bartenders. The “Punch Kings Last Call,” a competition amongst the ten winning barkeeps from around the country, crowned our own Nick Meyer of Rose Cafe. The event benefits Piggy Bank, a charity dedicated to creating an open-source solution for family farmers.

Born and raised in the great city of Los Angeles, this food, culture and music-loving punk rock angeleno wants to turn you on to all that is funky, delicious and weird in the city. While Elise holds down the fort, her adventurous alter ego Kiki Maraschino is known to roam the country in search of catfish.
View all posts by Elise Thompson →
This entry was posted in Food and tagged Cochon 555, Walter Manzke. Bookmark the permalink.