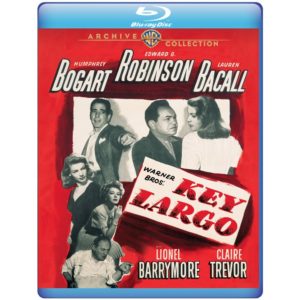 (1948, Warner Archives Collection) Embittered WWII vet Humphrey Bogart travels to Florida to pay his respects to Lionel Barrymore, the father of his late service pal. A hurricane forces Bogey to take shelter at Barrymore’s hotel; there, he finds himself in close quarters with his Army buddy’s comely widow (Lauren Bacall), as well as Johnny Rocco (Edward G. Robinson), a self-aggrandizing gangster returned from exile in Cuba to collect on a counterfeit deal. The performances are the key selling point for director John Huston’s adaptation of the Maxwell Anderson play, which he rewrote with Richard Brooks (“In Cold Blood”): Bogart and Bacall, in their fourth screen pairing, have their undeniable chemistry, but Robinson is mesmerizing as the ne plus ultra of his screen tough guy persona, a former kingpin reduced by time and law to a fugitive from his own country. Claire Trevor matches him step for step in an Oscar-nominated turn as Rocco’s alcoholic girlfriend, who in one heart-rending scene, is forced to sing “Moanin’ Low” for a drink (which Robinson then refuses to give her), and the supporting cast includes such pros as Thomas Gomez (Robinson’s sweaty lead goon), Ben Blue (local sheriff) and Harry Lewis (smart-mouthed Goon No. 2), who later founded such L.A. institutions as Hamburger Hamlet and Kate Mantilini’s.

Those seeking more Bogart on Blu-ray are directed to Warner Archive’s release of “Dark Passage” (1947), Delmer Daves’ strange and dreamlike adaptation of a David Goodis novel, with Bogart off-camera for the first hour and the viewer seeing the action through his eyes as he attempts to clear his name of a murder with the help of Bacall. The story takes some 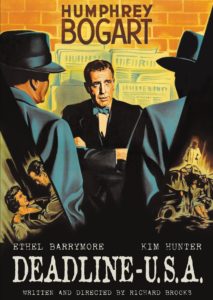 muscular imagination to follow, but there’s an alarming sequence where Bogart hallucinates under anesthesia while receiving a new face from crackpot doctor Houseley Stevenson, and Agnes Moorhead and Clifton Young give solid support as, respectively, Bogart’s formidable and deranged accuser and a nosy creep who takes a well-deserved beating from Bogie. WAC’s Blu-ray includes a short featurette about the film and Daves, as well as the 1947 Merrie Melodies cartoon “Slick Hare,” which finds Bugs Bunny encountering animated versions of Bogart, Bacall, Frank Sinatra and Carmen Miranda (who provides her own singing voice). And Kino Lorber has “Deadline, U.S.A.” (1952) with Bogie as the editor of a big city newspaper fending off an impending sale by publisher Ethel Barrymore and strong-arm tactics from gangster Martin Gabel. Fifth Estate drama from writer/director (and ex-newspaper man) Richard Brooks hits many familiar paper-in-peril story points but benefits from Bogart, older but no less tough as a champion of the free press and a bevy of fine players, including Ed Begley, Warren Stevens and Jim Backus as his editorial staff; noir expert Eddie Mueller provides typically informative commentary on the disc. 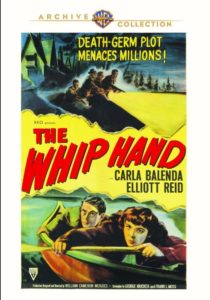 (1951, Warner Archives Collection) While on a fishing trip in Wisconsin, journalist Elliott Reed discovers that a nearly abandoned town is a secret stronghold for a Communist cell, which has employed a Nazi scientist (Otto Waldis) to create and unleash germ warfare on the American population. William Cameron Menzies directed this curious mix of Cold War panic thriller and doomsday science fiction, which exceeds its low-budget limitations with excellent cinematography by Nicolas Musuraca (“Cat People,” “Out of the Past”) and director William Cameron Menzies’ talent for creating disorienting and/or disturbing scenarios through slight shifts in reality (see: “Invaders from Mars). Case in point: big, bluff Raymond Burr, a far-too-neighborly resident in the ghost town who’s actually Waldis’ vicious right-hand man. The production history of “The Whip Hand” is almost as odd as the film itself: initially planned as a story about Hitler hiding in post-war New England, RKO chief Howard Hughes ordered extensive reshoots and changed the villains from Nazis to Communists to reflect his own Red Menace fears. The decision didn’t save the film from tanking at the box office and consigning it to relative obscurity until this official DVD release from WAC, which presents “The Whip Hand” in full-screen format and with its original trailer. 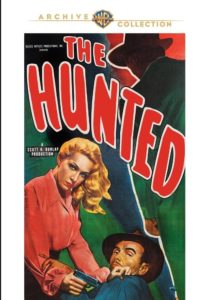 Monochromatic paranoia also strikes deep in “The Hunted” (Warner Archives Collection, 1948), a better-than-you’d think crime melodrama with Olympic ice skater Belita and Preston Foster as a recent parolee and the detective who put her behind bars, respectively, who fall hopelessly for each other, despite the fact that he believes she’s committed a murder. Budgetary issues can’t quite undermine the desperate longing and fear between the two leads, which helps to sell this forgotten noir penned by hardboiled specialist (and Canoga Park resident) Steve Fisher (“Lady in the Lake”). WAC also has “Ransom!” (1956), a somewhat pulpy kidnapping drama anchored by Glenn Ford as a father agonizing over his decision to refuse ransom demands made by his son’s abductors. The same material served as the basis for the more action-oriented 1996 drama “Ransom” with Mel Gibson. 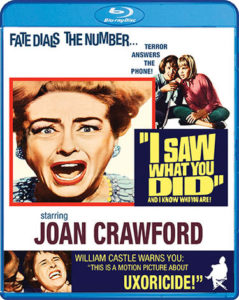 (1965, Shout Factory) A pair of precocious teens (Andi Garrett and Sarah Lane) decides to pass an evening without parents by randomly selecting names from the phone book and uttering the film’s title to those who answer (adding, “And I know who you are!”). Unfortunately, one of their calls puts them in the crosshairs of John Ireland, who has just murdered his wife; top-billed Joan Crawford appears in an extended cameo as Ireland’s lovesick neighbor, who pays dearly for her own attempt to put him in a bind. Lightweight scare fare from producer/director William Castle, who manages to drum up a few moments of genuine suspense, as well as his usual nods to Hitchcock (Ireland disposes of his wife in a reversal of the shower murder in “Psycho”), but the results lack the memorably morbid glee of his best horror titles (“House on Haunted Hill,” “The Tingler”). Shout Factory’s widescreen Blu-ray includes the original theatrical trailer as well as a spot where Castle shows off the film’s gimmick – seatbelts on each theater chair!

And if you seek more chills with your main course of crime, there is “The Red House” (The 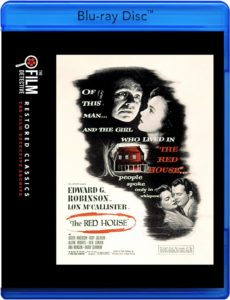 Film Detective, 1948), with Edward G. Robinson as a reclusive farmer who warns adoptive daughter Allene Roberts and his new hand (Lon McAllister) to stay away from the titular building, a dilapidated shack with a reputation for harboring “screams in the night.” Delmer Daves’ adaptation of the serialized novel by George Agnew Chamberlain plays more like a horror film, with its abundance of dark, wind-swept woods, Miklos Rosza’s score (which makes excellent use of a theremin) and Robinson’s unsettling turn as a quiet man unraveling under the weight of terrible secrets; Film Detective’s Blu-ray is a vast improvement over previous public domain releases and showcases Bert Glennon’s impressive night-steeped cinematography. Or you can sample some early William Castle efforts with three entries from Columbia’s “Whistler” series, based on the popular radio series of dark thrillers hosted by the sinister, all-seeing Whistler: “The Whistler” (1944), “The Power of the Whistler” (1945) and “Voice of the Whistler” (1945) are effectively and economical creepers, all featuring Richard Dix as different characters up to their neck in trouble, and available on MOD from Sony Choice Collection. 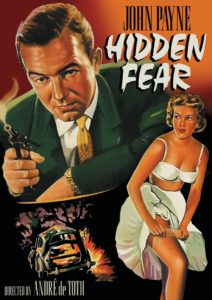 (1957, Kino Lorber) Gruff American cop John Payne travels to Denmark to clear his sister of a murder charge and becomes involved in the pursuit of a counterfeiting ring led by sinister Alexander Knox. So-so cop drama by Andre de Toth (“House of Wax”) benefits mostly from the Copenhagen locations and the bearish presence of Payne, who brings a sense of danger that the rest of the picture lacks. Kino’s Blu-ray includes trailers for their recent noir releases, including “99 River Street” with Payne and “Shield for a Murder.”

Additional Continental capers can be explored via Warner Archives’ “The Accursed” (1957), an American retitling of Michael McCarthy’s British thriller “The Traitor,” with Donald Wolfit sussing out a murderer among a group of former World War II Resistance fighters. The supporting cast, which includes a young Christopher Lee, Rupert Davies and Karel Stepanek, is the highlight of this talky but competent mystery. Same goes for WAC’s “Kill or Cure” (1962), with the underrated Terry-Thomas in a rare lead as a low-rent detective investigating a murder at a health spa. A slew of great UK comic players, including Dennis Price, Lionel Jeffries, Eric Sykes and Ronnie Barker enliven the proceedings when the script flags. 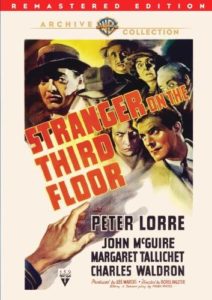 (1940, Warner Archives Collection) Beleaguered reporter John McGuire is wracked with guilt over the possibility that his testimony in a murder trial may have sent a innocent man (Elisha Cook, Jr.) to the electric chair. When his neighbor (Charles Halton) is killed in a manner similar to the case that condemned Cook, McGuire is pinned with the crime, sending his already shaky mindset into a tailspin, which requires his fiancée (Margaret Tallichet) to seek out the real killer. Frequently cited as the first true noir movie, Boris Ingster’s eccentric but ambitious directorial debut certainly meets some of the genre’s criteria, with Expressionistic photography by Nicolas Musuraca, and a script anchored by heavy streaks of Freudian psychology and capricious fate. Ingster’s direction is heavy-handed and the script by Oscar nominee Frank Partos (with uncredited help from Nathaneal West) requires some Herculean suspension of disbelief, but a brief but memorable appearance by Peter Lorre as the suspected killer and a paranoid fever dream in which McGuire envisions his trial for the neighbor’s murder make this a worthwhile addition to noir completists’ library. 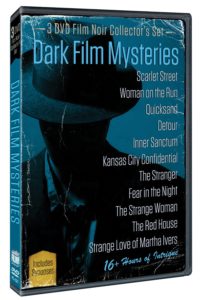 And if you’re looking to start such a library, you could lay a solid foundation with Film Chest Media Group’s “Dark Film Mysteries,” a three-disc set featuring eleven films, including such bona fide noir classics as Edgar Ulmer’s threadbare nightmare “Detour” (1950), Orson Welles’ underappreciated “The Stranger” (1946), with Edward G. Robinson pursuing Nazi war criminal Welles to small-town America, and Fritz Lang’s grim romance “Scarlet Street” (1945), also with Robinson. It also offers a slew of genre favorites like “Kansas City Confidential” (1952), “The Strange Love of Martha Ivers” (1946), “Quicksand” (1950) and “Fear in the Night” (1947). At more than 16 hours in length and priced less than $20, it’s cheaper and more entertaining than, say, committing a crime on your own.

Paul Gaita lives in Sherman Oaks, California with his lovely wife and daughter. He has written for The Los Angeles Times, LA Weekly, Variety and The Fix, among many other publications, and was a home video reviewer for Amazon.com from 1998 to 2014. He has interviewed countless entertainment figures from both the A and Z lists, but his favorites remain Elmore Leonard, Ray Bradbury and George Newall, who created both Schoolhouse Rock and the Hai Karate aftershave commercials. He once shared a Thanksgiving dinner with celebrity astrologer Joyce Jillson, and regrettably, still owes the late character actor Charles Napier a dollar.
View all posts by Paul Gaita →
This entry was posted in Movies and tagged FIlm Chest Media Group, Film Detective, Kino Lorber, shout factory, Warner Archvies Collection. Bookmark the permalink.