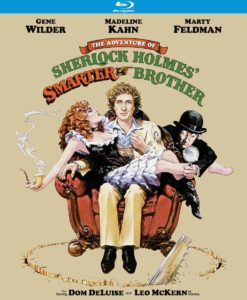 (1975, Kino Lorber) Gene Wilder made his directorial debut with this relentlessly silly comedy about the efforts of the Great Detective’s younger, more excitable but equally brilliant sibling, Sigerson (played by Wilder), to retrieve important state secrets before they fall into the hands of his brother’s nemesis, Professor Moriarty (Leo McKern). The influence of Mel Brooks weighs heavily on the picture, which was launched shortly after he and Wilder completed “Young Frankenstein”; both pictures share Marty Feldman and Madeline Kahn, as well as a predilection for berserk musical numbers (here, it’s a riotously bad opera with Dom DeLuise as its hammy lead, and Wilder, Kahn and Feldman bouncing through something called “The Kangaroo Hop”) and an eye for classic movie tropes, period detail and riffs on bodily humor. Like Wilder’s other efforts behind the camera (“The World’s Greatest Lover,” “Haunted Honeymoon” – which is also available on Blu-ray from Kino), the end result is hit and miss – for every moment of comic abandon, there is a toilet gag that falls flat – but the reason to see “Smarter Brother” is to watch Wilder’s calm, bemused face before external (and usually ridiculous) forces cause him to erupt in a torrent of anxiety and exasperation. Few actors could depict the absolute end of a person’s rope with such humor and humanity as Wilder, and he gets plenty of opportunity to do so here. Kino’s Blu-ray includes a commentary track by Wilder, which was recorded for a 2004 DVD release; his observations are filled with praise for his co-stars and production team and seem to underscore the gentle, slightly off-kilter spirit that people loved in him.

While We’re At It Dept.: Those in the mood for more mock mysteries and camp capers are 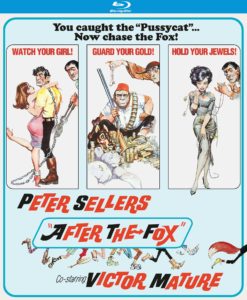 directed to “After the Fox” (1966, Kino Lorber), with Peter Sellers as a master criminal who uses the madness of an international movie shoot to provide cover for his latest scheme. Sellers clearly relishes the opportunities provided by Neil Simon’s script to employ an florid Italian accent, romance then-wife Britt Ekland and Maria Grazia Buccella and lock horns with Victor Mature as a faded American matinee idol; there’s also a slinky, swinging score by Burt Bacharach and Hal David, who also penned the title song sung by Sellers and the Graham Nash-era Hollies.

Only slightly more serious is “Modesty Blaise” (1966, Kino Lorber), American director Joseph Losey’s satiric take on the popular and long-running British comic strip about a glamorous adventuress; Monica Vitti’s kittenish turn as the tough-as-nails Modesty is all wrong, and the picture is too tongue-in-cheek for its own good (Vitti and sidekick Terence Stamp break into song while pinned down by gunfire), but the sets and costumes are eye-popping Op Art, the Continental locations (Sicily, Amsterdam and London) are lavishly photographed, and there’s a brassy score by John Dankworth, all of which add up to an easy-to-digest, ‘60s-swinging-spy diversion.

And Blue Underground offers up “Five Golden Dragons” (1967), with Bob Cummings (in 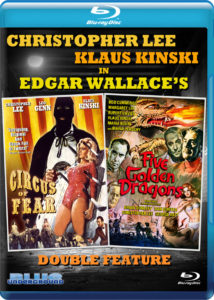 his final film role) riffing on his deluded ladies’ man persona as a happy-go-lucky American who becomes entangled with a crime syndicate while vacationing in Hong Kong. Cummings’ comic presents lightens the hints of pulp in the picture’s DNA (mysterious locations, sinister crime cabal, occasional flourishes of torture), and if it occasionally asks us to suspend disbelief and accept that the graying, fifty-something Cummings would catch the collective eyes of the toothsome female cast –Eurocult vets Maria Rohm, Margaret Lee and Maria Perschy – we are at least rewarded by cameos from psychotronic superstars Brian Donlevy, George Raft, Dan Duryea and Christopher Lee (who shot this back-to-back with “Vengeance of Fu Manchu” for producer/writer Harry Alan Towers and director Jeremy Summers) as four of the Five Golden Dragons, and Klaus Kinski in Peter Lorre mode as a sinister operative. Blue Underground’s Blu-ray pairs “Dragons” with “Circus of Fear” (1966), an overheated UK-German thriller (based on a story by Edgar Wallace) with Lee, Kinski and Margaret Lee as suspects in a string of crimes that orbit a traveling circus.

Paul Gaita lives in Sherman Oaks, California with his lovely wife and daughter. He has written for The Los Angeles Times, LA Weekly, Variety and The Fix, among many other publications, and was a home video reviewer for Amazon.com from 1998 to 2014. He has interviewed countless entertainment figures from both the A and Z lists, but his favorites remain Elmore Leonard, Ray Bradbury and George Newall, who created both Schoolhouse Rock and the Hai Karate aftershave commercials. He once shared a Thanksgiving dinner with celebrity astrologer Joyce Jillson, and regrettably, still owes the late character actor Charles Napier a dollar.
View all posts by Paul Gaita →
This entry was posted in Movies and tagged Blue Underground, Christopher Lee, Gene Wilder, Kino Lorber. Bookmark the permalink.

One Response to Movies Till Dawn: Gene Wilder Tribute – “The Adventure of Sherlock Holmes’ Smarter Brother”