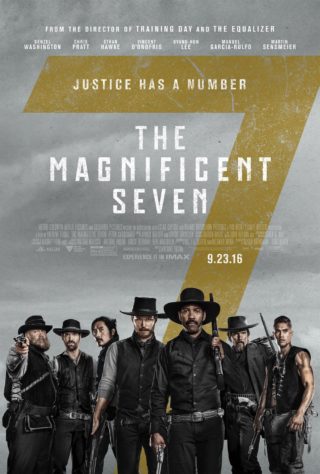 I was so excited to see the remake of “The Magnificent Seven” when I heard that the wonderful action director, Antoine Fugua (“Training Day,” “The Equalizer,” and “Southpaw”) was at the helm. He always takes it a step up when it comes to directing action movies.

The first “Magnificent Seven” was made in 1954 and starred Charles Bronson, Yul Brynner and Steve McQueen. It was actually a remake of Akira Kurosawa’s “Seven Samurai” which was set in the 1500s.

In this version, Denzel Washington is in the role Yul Brynner originated. He plays Sam Chisolm, and you really don’t need to know much about him, except for the fact that he looks great in black, has a beautiful horse, is a killer shot and has tons of charisma. It’s Denzel after all.

Okay, so, Sam gets hired by Emma Cullen (the wonderful Haley Bennet) and her brother, Matthew (Matt Bomer) to help save their small farming town from a ruthless land baron, Mr. Bartholomew Bogue (the very thin and very slimy, Peter Sarsgaard) who according to an article, gave up gluten and lost a ton of weight.  Bogue is forcing the farmers to sell him their land so he can mine it for gold. The dude is a classic egomaniac with a narcissistic personality disorder. (Sound familiar?).

For reasons I won’t go into, because it would be a spoiler, Sam agrees to take on the job. He then tracks down several BFF’s to help him with this impossible mission to defeat Bartholomew and his army of evil doers. They include: Chris Pratt (your basic great-looking guy, with a charming personality, who happens to be a crack shot); the almost unrecognizable Vincent D’Onofrio, who likes to quote bible verses as he blows away bad guys; Ethan Hawke, who is suffering from PTSD, and his sidekick Martin Sensmeier, as the Comanche Red Harvest, who is not only brilliant at face-painting, but a master with the bow and arrow. Also in this wonderfully diverse cast is Manuel Garcia-Rulfo, a Mexican bandit with a sense of humor almost good enough to play at the Comedy Store in Hollywood.

Joan was born in Brooklyn and spent many years working as an actress in New York City. Even though she traveled extensively, Joan couldn't imagine living anywhere else.. Well one day, she met someone at a party who regaled her with stories about living in L. A. specifically Topanga Canyon. A few weeks later she found herself on an airplane bound for Los Angeles. Joan immediately fell in love with the town and has been living here for the last twenty years and yes, she even made it to Topanga Canyon, where she now resides, surrounded by nature, deer, owls and all kinds of extraordinary alien creatures.. Joan continued acting, but for the last several years (besides reviewing plays and film) she has been writing screenplays. Joan was married to a filmmaker who created the cult classic films, (way before she knew him) Faces of Death. As a result of his huge following, they created a funny movie review show entitled Two Jews on Film, where Joan and her husband, John would review movies and rate them with bagels You can see their reviews by going to youtube.com/twojewsonfilm. Although it's now only one Jew - Joan is occasionally joined by her beautiful Pekingnese and Japanese Chin.
View all posts by Joan Alperin →
This entry was posted in Movies and tagged 'The Magnificent Seven' movie review, Antoine Fuqua, Chris Pratt, Denzel Washington, ethan hawke, Funny movie reviews, Peter Sarsgaard, Two Jews On Film, Vincent D'Onofrio, Western. Bookmark the permalink.