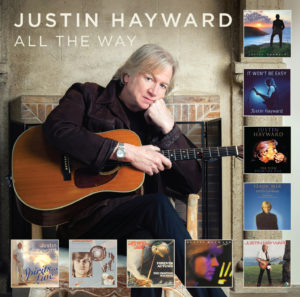 We’re in the midst of the most hostile election season I can remember; during these contentious times, I find myself wanting to get away from all the noise, name-calling and anger. And my musical choices at the moment reflect my desire for quiet refuge, mature wisdom and solitude. (There’s been a lot of Bach on my playlist lately, as well as Leonard Cohen.) So when I found out The Moody Blues‘ Justin Hayward (who wrote “Question,” “Tuesday Afternoon,” and  “The Story in Your Eyes”) had released a new CD, I was in the mood to listen.

All The Way is a compilation of Hayward’s solo career, with some Moodies tracks included as well. For me, it’s the perfect balm for our Trump-infested, social media-run world. Hayward – sensitive, thoughtful, and handsome at 70 – is about as opposite from Trump as a human can be. His voice doesn’t grate; it soothes. He doesn’t yell and berate; he quietly reflects, intelligently and articulately through memorable melodies.

The music is a continuation of the spiritual journey The Moody Blues began in the 60’s. While some artists of his era plummeted repeatedly into darkness and destruction, Hayward has always seemed to strive upwards towards the light, towards meaning. He absorbs and observes the world and its problems, while still keeping a distance from it. Hayward appears to be unaffected by the harsh words of critics, who wrote off The Moody Blues as too ethereal, self-indulgent, twee, or just ridiculously over-the-top. Like any artist of real worth, he’s kept his individuality and creativity intact from outside forces; in a world of changing musical trends, he’s aware of his worth and unique voice.

The album starts off with the original version of “Blue Guitar,” recorded with 10cc in 1974. It’s an understated, mid-tempo production, featuring a dreamy slide guitar that brings George Harrison’s early solo work to mind. The country-tinged “Troubadour,” from 1996’s The View from the Hill, is one of my favorite tracks. Hayward revisits a theme often expressed in his songs: a yearning to either recapture something from his past that was lost, or to finally arrive at an idealized place or state of mind: “In the garden of paradise / I heard a voice sing / I can still feel the thrill of it, the chills it would bring / Far away in the western sky, over the sea / There’s a land that we dream about / Peaceful and free / waiting for me.”

A live version of “Nights in White Satin” is included; it’s naturally stripped down from the bombastic original (no poem or gong). Without the flowery orchestration, it rocks in its pure form. Another highlight of the CD is a version of “The Story in Your Eyes,” with a string and horn section, acoustic guitar, and percussion. The strings are not of the lush, sweeping, Days of Future Passed style used by the Moodies; instead, it sounds like a small string section, driving the song along forcefully (but still with the kind of sweetness that embodies most of Hayward’s tracks).

The album concludes with a new song, “The Wind of Heaven,” which Hayward wrote for the film of the same name. Beginning with Hayward’s trademark acoustic guitar picking, embellished with flutes and strings, the verses have a Moody Blues-like feel. According to the liner notes, the film is about a vet returning home from Afghanistan, trying to pick up the pieces of the life he’d left behind. Hayward’s voice, understandably, sounds a bit more weathered than on the other tracks – appropriate for the subject matter – but still strong and clear. When I first listened to it, I didn’t realize it was written for a film; I assumed that the line “my brothers all are gone / a man who walks alone / living day by day” was about growing older and seeing one’s friends, family and colleagues pass away.  It’s not too much of a leap to imagine that the song is about the aftermath of war, as well as the battle of aging. Growing old happens to us all – if we’re lucky.

Though Hayward may be quietly reflective, as well overly sentimental at times, remember that this is a guy who lived through the excesses of being in a rock band in the 60’s – with all of its worldly rewards and challenges. When viewed through the lens of the late 60’s/early 70’s, The Moody Blues – pioneers of the art rock movement – weren’t conventional at all; their grandiose musical world revolved around Timothy Leary, acid trips, and TM (back when meditation was still a radical concept in the western world). Hayward probably saw and experienced things in just a few years the average person doesn’t in an entire lifetime – and emerged not bitter, angry, or battered, but calm, reflective and seemingly unscathed. I kept this perspective in mind while listening to the CD, and it affected my overall impression: what might have seemed precious sounds pure; what might have seemed maudlin sounds heartbreakingly timeless.

Carolyn Soyars is a freelance writter/blogger and musician, who performs under the name Carolyn Edwards. She has played with such critically acclaimed bands as 3D Picnic and The Negro Problem, and performs traditional folk music with her husband, Dave Soyars. For more info., see www.carolynsoyars.com for writing, and www.carolynedwards.com for music.
View all posts by Carolyn Soyars →
This entry was posted in Music and tagged 60's, Justin Hayward, Moody Blues, psychedelia. Bookmark the permalink.