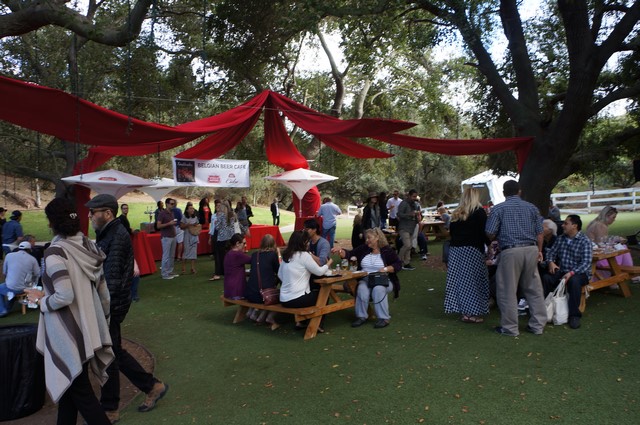 Once again, Los Angeles Magazine hosted one of the best events of the year on the verdant expanse of Saddleback Ranch. The day was cool and sunny in spite of a short rain shower. There were lots of old favorites to enjoy as well as some new and nascent restaurants to test.

We are always happy to see Scopa Italian Roots/Black Market Liquor Bar and last weekend was no exception. Chef Antonia Lofaso wooed us with a whimsical version of steak frites served in a cone. The strips of steak and frites, which were cooked in duck fat, were drizzled with mayonnaise and chimichurri. The chef was modeling her new line of sporty chef’s togs and they look fantastic.

Saddlepeak Lodge is also a familiar favorite, but they outdid themselves with a braised buffalo shortrib, shredded and served with a celery root slaw and carrot garnish. The dish took advantage of the buffalo’s sweetness without making it overwhelming. Knuckle & Claw made mini lobster roll shots and Jitlada brought their 4-alarm Thai food, which I love, but almost sends me to the ER every time. Maple Block Meat Co. served their popular smoked sausages with pickled peaches. 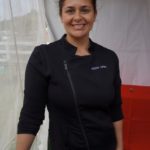 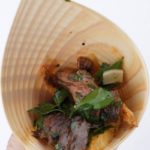 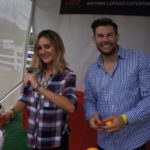 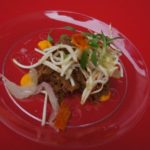 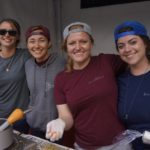 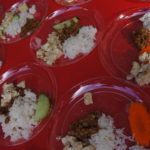 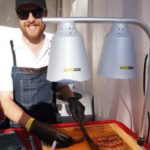 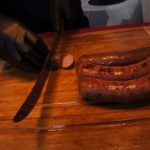 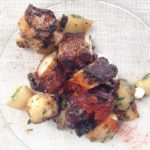 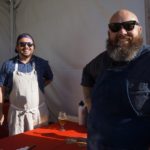 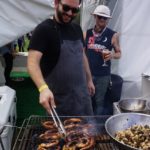 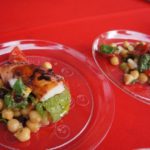 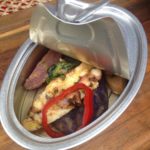 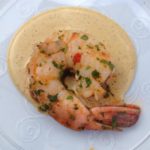 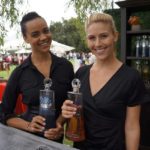 There was a 3-way octopus-off, With Hatchet Hall’s octopus with runner beans, chorizo salad and smoked paprika in the very next booth to Evan Funke’s soon-to-open Felix, whose dish had a lot of ingredients….octopus, chickpeas, an herb salad (I only caught the mint), fennel bulb, red jalapeno, currants and pine nuts. While Felix had a superior overall plate, Hatchet Hall did have a very tender octopus (and one of the guys looks like Jared Leto). Fig Santa Monica’s octopus with peewee potatoes and an ahi vinagrette was also good, but we were far more enamored with their intense maitake mushrooms, muhammara (a spicy pepper dip from Aleppo), and zhug (A Yemeni hot sauce based in cilantro).

Son of a Gun went for simple perfection with Cajun Shrimp and a creole mustard. The Sunset Malibu served a simple poached shrimp in orange juice with herbs, vegetables, jicama and a tropical slaw. Four Seasons Westlake Village created a duck confit salad with pomegranate and citrus that could make me happily go on a diet. We adore Manhattan Beach locals (now also in DTLA) Little Sister’s take on Thai food. The Viet Coconut Braised Pork over Master Stock Jasmine Rice came with a single quail egg, an addition that felt like a special treat.

A surprise contender, Chef Nick Erven, created a fried Sumatran pickled date with maple, curry, lime, and pine nut praline. They were unbelievable, and surprisingly vegan, so check out Erven in Santa Monica for some vegan vittles. Another delicious vegan dish (assuming there is no chicken stock in the puree) came from The Bellwether. Their white fig in fava bean puree with frisee was rich and complex.

“Sweet Alley” included Bottega Louie’s rainbow selection of macaroons, Salt & Straw ice creams, California Donuts and two winners from Love & Salt’s Pastry Chef Rebecca Minaj. We can’t really choose between the pumpkin bread with whipped marscapone and spiced pepitas and the Brown Sugar Pudding with creme fraiche, sea salt and cocoa nibs. They were both fantastic. Ok, I have to admit it was the pudding. Cookie Good offered cookies patterned after popular junk food. The Nutter Butter bars were worth a special trip to the Santa Monica bakery. I was a little disappointed the Cheet-oh cookies weren’t weirder and cheesier.

It is hard to compete with the beauty of Saddlerock ranch for our attention, but the food was truly the star of LA Magazine’s annual Food Event. I was reminded that Los Angeles has a profusion of great restaurants and I need to get out more to the many new and exciting places and all of my old favorites. 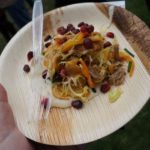 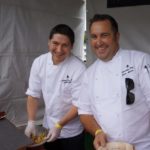 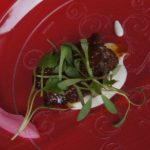 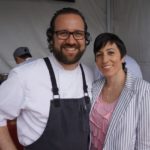 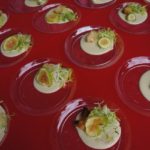 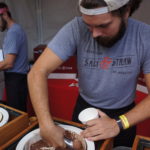 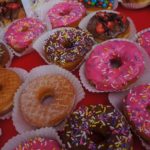 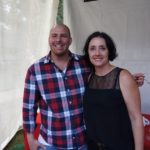 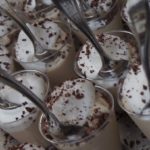 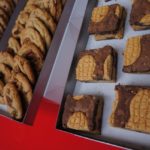 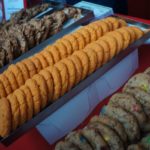 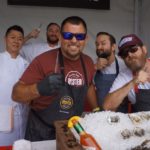 Born and raised in the great city of Los Angeles, this food, culture and music-loving punk rock angeleno wants to turn you on to all that is funky, delicious and weird in the city. While Elise holds down the fort, her adventurous alter ego Kiki Maraschino is known to roam the country in search of catfish.
View all posts by Elise Thompson →
This entry was posted in Events, Food, Photo Essays. Bookmark the permalink.