The Hollywood Premiere Party Puts You on the Red Carpet 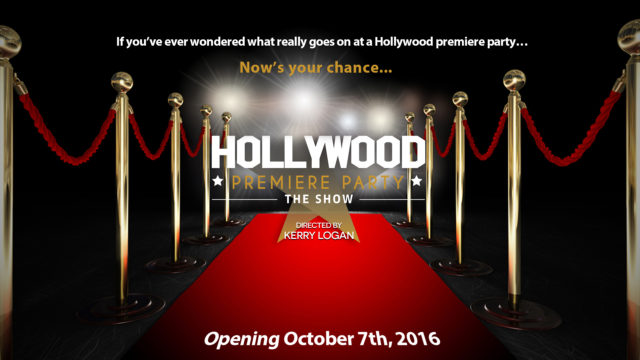 This interactive theater experience, inspired by Tony and Tina’s Wedding, takes you behind the scenes of a big Hollywood party. The action revolves around the premiere of the fictional film, “Love and Waffles.” The evening begins on the red carpet, where guests can enjoy passed canapes while actors and improv comics play the parts of “Aging Starlet,” “Limo Driver, “Agent,” and even “Celebrity Stalker.” “Hollywood Premiere Party” not only provides the audience with a show, there will also be live music, VIP treatment, dinner, dessert and champagne.

Making its debut in Los Angeles with nine performances, this very funny immersive theatre experience will take place at The Manor on Vine. Written and directed by Kerry Logan, the show has been six years in the making. According to Logan, it’s a new theatrical concept that includes a talented list of film and television actors, along with some of the hottest comedy improv talent in L.A., who are all bringing their own unique history and industry experiences to the show.

TICKETS: Start at $99.00 which includes the red carpet pre-show, hors d’oeuvres, dinner, dessert, non-alcoholic beverages, live music and full access to the gala. If you choose to purchase the $129.00 ticket you will receive a VIP All-Access ticket which also includes reserved seating, special VIP treatment, champagne, gift bag and a complimentary photo with the cast and crew of “Love and Waffles.” A cash bar will be available for both regular and all access tickets.

“Hollywood Premiere Party” will open Friday, October 7th and run through Saturday, November 5th. There is an extra performance, Thursday, November 3rd. Each Friday and Saturday the fun will begin at 6:15. The Manor on Vine is located at 1718 Vine Street, Hollywood CA. For reservations please call 323-960-7792

Joan was born in Brooklyn and spent many years working as an actress in New York City. Even though she traveled extensively, Joan couldn't imagine living anywhere else.. Well one day, she met someone at a party who regaled her with stories about living in L. A. specifically Topanga Canyon. A few weeks later she found herself on an airplane bound for Los Angeles. Joan immediately fell in love with the town and has been living here for the last twenty years and yes, she even made it to Topanga Canyon, where she now resides, surrounded by nature, deer, owls and all kinds of extraordinary alien creatures.. Joan continued acting, but for the last several years (besides reviewing plays and film) she has been writing screenplays. Joan was married to a filmmaker who created the cult classic films, (way before she knew him) Faces of Death. As a result of his huge following, they created a funny movie review show entitled Two Jews on Film, where Joan and her husband, John would review movies and rate them with bagels You can see their reviews by going to youtube.com/twojewsonfilm. Although it's now only one Jew - Joan is occasionally joined by her beautiful Pekingnese and Japanese Chin.
View all posts by Joan Alperin →
This entry was posted in Theater, Upcoming Events. Bookmark the permalink.