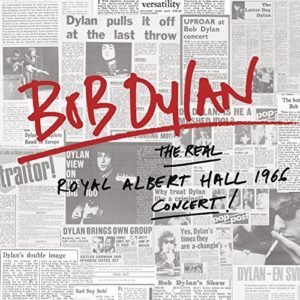 Bob Dylan was on one hell of a roll during his 1966 tour, his first with an electric band backing him. It’s the period right in between Highway 61 Revisited and Blonde on Blonde, working with The Band, and night by night they are refining and polishing one of the grandest, most perfect sounds ever heard in rock. Every night they get in front of an audience that’s likely to be hostile and dismissive, unappreciative of their efforts. As often happens when an immovable object meets an irresistible force, sparks fly.

The song selection on this two-disc set from the London show, culled from the massive 36-disc set The 1966 Live Recordings, is identical to the one heard on The Bootleg Series Vol 4, the official release of the much-bootlegged recording that was commonly mis-labeled as being from the Royal Albert Hall, but was in fact from the Manchester concert nine days earlier. That’s the one where one guy screams out “Judas!” as the group is about to launch into “Like A Rolling Stone,” prompting Dylan to heckle his heckler – “You’re a LIAR!” and then tell the band to “play fucking loud!”, which they do.

Watching the footage from the period in Scorcese’s No Direction Home documentary, one senses that some people were going to see Dylan just to hassle him for going electric. It had become a countercultural thing, even though it reminds me of people who bought Beatles records just to burn them when that was a thing.

But every negative reaction from the audience has a galvanizing effect on the musicians, who just turn up LOUDER and hit HARDER, as if to break through this wall of resistance they’re getting. No one demonstrates this more than drummer Mickey Jones, who plays like he’s trying to give the offended folkies an earache. He’s got a hard touch that doesn’t seem like it should work in songs as lyrical as these, but does.

This new release, from the show which actually did take place in London on May 26, isn’t as loudly confrontational as the Manchester show, and the crowd seems appreciative for the most part. But there are moments where you can still hear Dylan trying to reassure people – “This isn’t British music, it’s American music, now, come on!” – so he must have been taking some shit up there.

Dylan himself is singing even better than he had in Manchester, and the acoustic set that makes up disc one is delicately powerful stuff. When they get to the electric portion, he’s clearly enjoying the sound of his own voice, wailing over the force of the Band. At the final verse of “Like A Rolling Stone,, he hollers at the girl with the diamond ring to “Pawn it baaaaaabe!” with such intensity, that his famous boast about being “as good a singer as Caruso” seems a lot less funny than it was probably meant to.

Even without any variation in the set lists, when the performances are this hot, I can understand why someone might want 36 CDs worth of it, and go for the big box, even with the caveat that not all the shows are as well-recorded as this. But I definitely recommend that you get this show, along with the aforementioned Bootleg Series Vol 4 set, as essential documents of an incredible moment in time, the best realization of Dylan’s potential as a performer that we have on record.

This entry was posted in Music. Bookmark the permalink.