Movies Till Dawn: ‘Tis the Season – High Tension for the Holidays 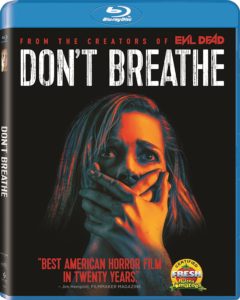 “Don’t Breathe” (2016, Sony) What seems at first like the simplest of robberies – the theft of insurance money hidden in the home of a blind man (Stephen Lang) – proves far more complicated for a trio of young and desperate thieves, as their intended victim is more dangerous than expected. As with director/co-writer Fede Alvarez’s previous feature, the “Evil Dead” reboot, plot and characters are strictly stock – Jane Levy’s Rocky wants to provide a better life for her sister, Dylan Minnette is a cop’s kid with a reserve of moral fiber, and a string of false endings, stacked like Russian nesting dolls, strains credulity and patience. But once the burglars discover that Lang – a former soldier – has outfitted the house like a malevolent version of the old Mousetrap board game, the film becomes a precisely calibrated and nerve-rattling dark ride, with Lang tracking down the home invaders through sound and sense. Levy, who went through the tortures of the damned in “Evil Dead,” is put through similar paces here, but also displays appealing grit during the more quiet moments. Lang is equal parts terrifying and pitiable, with an intense and emotionally driven physicality that would do Lon Chaney Sr. proud; his performance also helps to keep the film on track when the Blind Man’s secret – ugly business that repel some viewers – is revealed. Sony’s Blu-ray includes commentary by Alvarez, Lang and co-writer Royo Sayagues, as well as deleted scenes and several making-of featurettes which detail the exceptional production design and complicated camerawork. 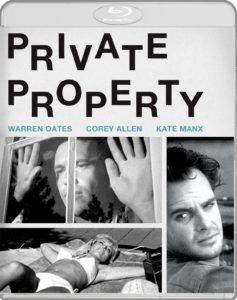 “Private Property” (1959, Cinelicious) Psychotic drifters Corey Allen (“Rebel Without a Cause”) and Warren Oates take over an abandoned home in the Hollywood hills in order to obsess over a lonely housewife (Kate Manx, wife of writer-director Leslie Stevens) in the house next door. Lurid thriller from Stevens – creator of “The Outer Limits”- shoulders an abundance of purple dialogue laden with steam-heat innuendo and aesthetic nods to the French New Wave, but also boasts crisp black-and-white cinematography by Oscar-nominated cinematographer Ted D. McCord (“The Treasure of the Sierra Madre”) with help from camera operator and future DP legend Conrad Hall, and unsettling turns by Oates and especially Allen as emotionally infantile creeps whose unhealthy fixation on conquest may be a smokescreen for more forbidden desires. The film’s frank attitude towards sex was its undoing (trouble with the Production Code kept it from receiving an MPAA seal, which torpedoed its chances for wide distribution) but a half-century-plus later, remains its most distinguishing feature, placing it as a pulp forebearer to more mature/transgressive films a decade later. Cinelicious’ DVD/Blu-ray combo, which presents “Property” in a sparking restored 4K edition, includes an interview with still photographer/tech advisor Alexander Singer, and liner notes by Don Malcolm that detail intriguing facts about the production, such as Stevens’ decision to shoot the film in his own home (off Miller Drive) and Manx’s untimely death by her own hand just four years later. 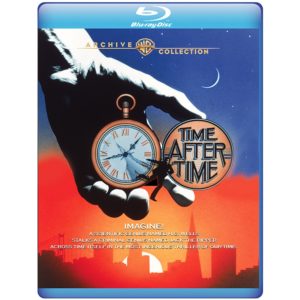 “Time After Time” (1979, Warner Archives Collection) Having suggested that Sherlock Holmes could overcome his neuroses with the help of Sigmund Freud in “The Seven Per-Cent Solution,” writer-director Nicholas Meyer sends H.G. Wells to modern-day San Francisco via one of his enduring literary creations – the Time Machine – to stop Jack the Ripper in this crowd-pleasing fantasy-thriller. As Wells, a subdued Malcolm McDowell essays equal parts science-nerd timidity and Victorian sense of right as he pursues the Ripper (David Warner, ideally cast), who, after stealing the author’s time-travel device to evade capture, continues his murder spree in the 20th century. He’s also quite funny in his attempts to grasp the mysteries of television, McDonald’s (“a Scottish restaurant”) and Carter-era women, as embodied by a bank employee (Mary Steenburgen) who finds McDowell’s nervous courtliness charming. Meyer handles both the sweetly off-kilter banter (the two actors were briefly married after completing the film), and the white-knuckle suspense of the final third with skill, aided in no small part by Miklos Rozsa’s final film score; were the murders not so gruesomely depicted, this might make an ideal Sunday afternoon family screening. Warner Archives’ Blu-ray ports over a leisurely commentary track featuring Meyer and McDowell (who were recorded separately) from a 2002 DVD release. 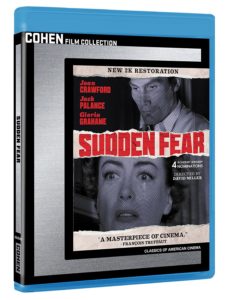 “Sudden Fear” (1952, Cohen Media Group) Wealthy playwright Joan Crawford crushes aspiring actor Jack Palance while he auditions for one of her shows, only to meet and fall for him on a cross-country train ride. Their marriage immediately heads south once Palance hears about her sizable fortune, and with the help of ex-girlfriend Gloria Grahame, plots to do away with Joan, not aware that she has penned a plot for their own demise. Effective and enjoyable potboiler hinges on a familiar premise – The Person You Married Is Not Who You Think He/She Is – worn smooth by a half-century of episodic TV and Lifetime movies, but in the hands of its terrific cast, who know a thing or two about diabolical schemes, and psychodrama specialist David Miller,”Sudden” eschews the suds in favor of slow-boiling, paranoia-driven suspense that approaches feverish temperatures in time for a (literally) slam-bang finale. Both Crawford and Palance earned Oscar nominations for their performances, but they’re well matched by noir favorite Grahame in full-bore feline fatale mode. Cohen Media’s Blu-ray offers a 2K restoration that does well by Charles Lang’s Oscar-nominated photography of the San Francisco locations and informative commentary by historian Jeremy Arnold.

Paul Gaita lives in Sherman Oaks, California with his lovely wife and daughter. He has written for The Los Angeles Times, LA Weekly, Variety and The Fix, among many other publications, and was a home video reviewer for Amazon.com from 1998 to 2014. He has interviewed countless entertainment figures from both the A and Z lists, but his favorites remain Elmore Leonard, Ray Bradbury and George Newall, who created both Schoolhouse Rock and the Hai Karate aftershave commercials. He once shared a Thanksgiving dinner with celebrity astrologer Joyce Jillson, and regrettably, still owes the late character actor Charles Napier a dollar.
View all posts by Paul Gaita →
This entry was posted in Music and tagged Cinelicious Pictures, Cohen Media Group, Sony, Warner Archives Collection. Bookmark the permalink.

2 Responses to Movies Till Dawn: ‘Tis the Season – High Tension for the Holidays