This Saturday Chinatown Welcomes the Year of the Rooster

Posted on February 2, 2017 by Elise Thompson 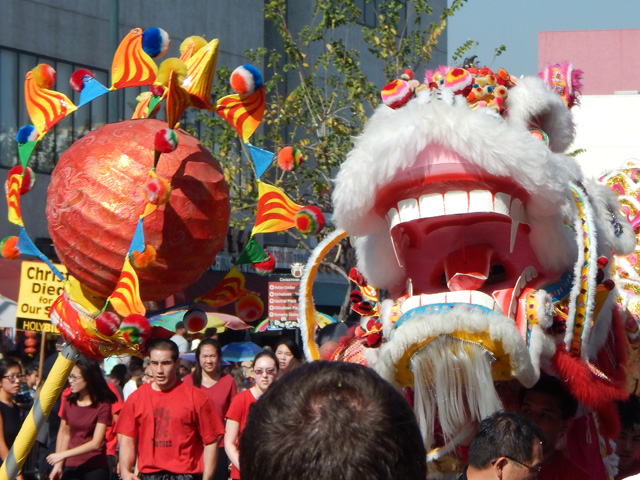 This weekend LA’s Chinatown celebrates the year of the rooster with the 113th Annual Golden Dragon Parade. Saturday, Jan 4th, hundreds of colorful floats, decorated cars, and dancers will parade from Hill and Ord Streets to Broadway and Cesar Chavez. If you like firecrackers, you are in for a good time. How about 500,000 firecrackers? The parade commences at Hill and Ord Streets at 1pm and concludes at Broadway and Cesar Chavez at 3pm.

The Chinese New Year Festival will also be taking place from 12pm until 8pm on the Central Plaza. It is one of the largest festivals in the country, drawing over 125,000 people. The events are broken up into categories following the 5 elements, with “wood” focusing on crafts, “fire” unsurprisingly will be cooking, “earth” includes cultural events, ‘metal” encompasses martial arts demos and “water” represents the finer arts like calligraphy.

We love the Fruit Carving, the Dumpling Eating Contest, Candy Sculpture, the interactive martial arts lessons, and really cool Chinese mask-themed Face-Painting by Tai-Ling Wong. Do not miss the Traditional Southern Style Dragon and Lion Dance at noon and again at 4pm. There will also be acrobats (teapot juggling. For real), and Chinese Beijing Style Opera, including performances of Monkey King (Sean Liu), and Ruse of the Empty City (Ben Liu). The festival also hosts a craft and vintage market, and the local art galleries usually stay open (check out Coagula and the Velvet Painting Museum).

Besides the fantastic Chinese restaurants and food booths, there will be food trucks on hand for the peckish, including Kogi, the Lobsta Truck,Tokyo Doggie Style and the Yalla Truck. The events are FREE to the public. The festival is easily accessed via Metro Gold Line rail from the Chinatown Station.

Born and raised in the great city of Los Angeles, this food, culture and music-loving punk rock angeleno wants to turn you on to all that is funky, delicious and weird in the city. While Elise holds down the fort, her adventurous alter ego Kiki Maraschino is known to roam the country in search of catfish.
View all posts by Elise Thompson →
This entry was posted in Attractions, Events, Food, Upcoming Events. Bookmark the permalink.