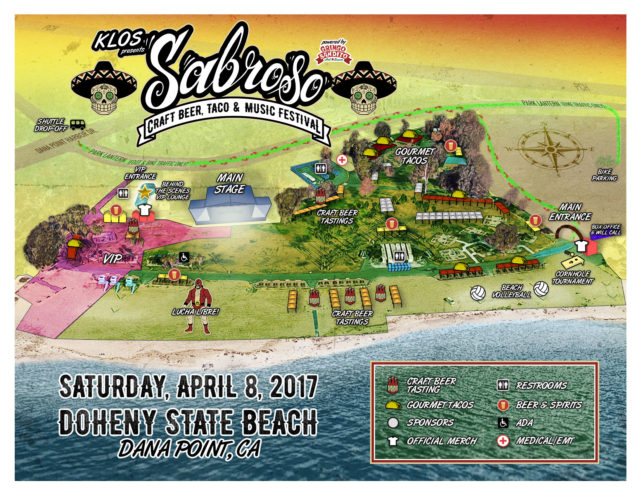 The upcoming Sabroso Craft Beer, Taco and Music Festival on April 8, 2017 promises to be one of the top events of it’s type in Southern California. Taking place at Doheny State Beach in Dana Point, it will be a fun day for all who attend and especially those who are interested in trying some of the best craft beers that Southern California has to offer. Presented by radio station KLOS, Sabroso is produced by Brew Ha Ha Productions, California’s most successful and respected craft beer festival producer. Also helping to power the festival is Gringo Bandito, a hot sauce company established by Dexter Holland, lead singer for powerhouse multi-platinum Orange County punk rock group The Offspring, who will also be headlining the music portion of the festival.

The Los Angeles Beat recently sat down with Cameron Collins, co-founder of Brew Ha Ha Productions, to talk about the festival.

Q: Why are tacos and beer such a natural combination?

A: I think the fact that they’re both probably comfort food; tacos go together with beer like pizza and beer or burgers and beer. It seems that always when you order tacos that you need a beer to go with it. A big thing was that we wanted to try to create a Southern California culture based event. I was born in Mission Viejo Hospital and have lived in Southern California my entire life. We grew up eating tacos and going to the various taco shops around town and riding our skateboards around to go to lunch. As we grow up, the whole thing got really popular and we loved beer, loved tacos, so what we wanted to do was create a celebration of Southern California culture. That’s the idea behind the event that we started a couple of years ago.

Q:What is the event going to offer in terms of finding out about locally produced craft beer?

A: We’re going to have a lot of local breweries onsite. What’s great about our event is the brewers themselves actually come to our festivals. They really enjoy going. As far as Brew Ha Ha goes, we’re really not just an event producer, we are craft beer geeks. I have 250 bottles of beer in the cellar at my house; I’m a beer guy and the brewers recognize that. We’ve really geared the event to be something that celebrates those breweries, so that’s why you’ll actually see the brewers and brewery owners onsite at our events talking to the people about beer and what’s going on.

Q: How are the tacos going to be at the event?

A: Brew Ha Ha has always been strictly a craft beer festival and our main focus has been nothing but the beer. With this event we’ve branched out and tried to reach the foodie side of it with the tacos as well as all the local breweries. With these tacos, the way that they’re different is that we’re bringing in a lot of chefs that typically don’t make tacos, like Greg Daniels from Haven Gastropub. They’re not known for tacos over at Haven, but he is preparing tacos for this event. It should be interesting, knowing what his capabilities as a chef are. There will be Cody Storts, the chef over at Salt & Ash. He doesn’t normally do tacos there—-that’s not the main dishes that they’re serving——-but he does come down with his crew and does all these cool creative tacos.

We have all sorts of folks, like the Viking Truck, they’re known as a bratwurst and big sausages turned into corn dogs truck. Last year they did lamb. It’s challenging the chefs to do something to really kick the taco offerings that we’re having instead of just the regular taco stand where you go to get a couple of carne asada tacos. It wouldn’t be a real fun event if all we served was carne asada, it would be very boring. You’ll see things like teriyaki braised, panko crusted spam tacos. You’ll see birria, which is goat. You’ll see vegetarian offerings, tacos with seaweed, and you’ll say ‘this is not what I expected’ in a taco. We’re going to be traditional to wacky, far-out stuff so I think that’s one thing that makes it really exciting.

Q: So who do you see coming to the Sabroso Craft Beer, Taco and Music Festival?

We’re bringing in not just the beer geeks, and I call myself a beer geek, it’s not just the beer geeks that are coming, but we’re bringing in all sorts of different people. There are the people who are familiar with local beer and craft beer and what the options are and others for who it can be intimidating. For example, ‘I don’t know the difference between an IPA and an Imperial IPA and a Double IPA. What’s an IBU, I don’t know what an IBU is? An International Bitters Unit? What am I supposed to do with that information? It’s intimidating, all this stuff I need to know—–I’ll just have a Bud Light!’. They’re missing out on a lot of great beers because of things like that. So it gives people who don’t normally get exposure to that to get familiar with our local breweries and try to get a taste for it. Our goal, really, is to convert beer drinkers into craft beer drinkers. I think we’re achieving that by offering this with all the concerts, tacos, Lucha Libre wrestling and of course all the great beer that will be there, so I love it!

Q: What do you think of the location you’ve chosen for Sabroso?

A: There could not be a better location for this event. I’ll go back, this is the way that Sabroso started. Four years ago, I woke up at 4am out of this dream that we were putting on this festival in Doheny. In Dana Point, actually, not Doheny, at a different park. Bur for whatever reason, I don’t know why, but we had Lucha Libre wrestlers, we had tacos, we had all these chefs from around town, there were all these breweries and there was all this beer. I thought, ‘well, I’ve had all this fun in my dream!’, so I grabbed my pen and started writing all these notes. One of the notes I had was that I wanted to do a Chihuahua Beauty Pageant. I don’t know why, but I thought it would be funny. We’ve never done that part! We’re going to get to that eventually, some day. So my wife woke up and I told her about this dream and that I seriously wanted to do this event, this taco thing. She thought it sounded great and we decided that we were going to do this. So there idea was there, I always wanted to do it at Dana Point, that was our goal. It ended up falling through a week before we were going to announce the venue at Dana Point so we ended up doing the event out at Oak Canyon Park next to Irvine Lake. We’ve done it for a few years and it’s grown like crazy. We were selling a couple thousand tickets, there was no more room for anyone in that venue. We were selling out well before the event, there were no tickets to sell at the door, so people wanted to come out to this event and there was just no room.

Next thing that I knew, we were working with this company called Synergy Global Events and they had done an event out there called the Driftwood Craft Beer, BBQ and Country Festival and it was absolutely incredible. So we decided to gear this event up. It’s a big challenge, with no power and no restrooms so we had to bring in all that stuff. So you’ve got to bring out a big crowd. We talked about it, went back and forth for a month or two and then we decided, ‘lets swing for the fences, lets do this’. It was the rebirth of an event that was already successful. It’s really a dream come true for me, I’ve always wanted to do something at Doheny, I just never really thought that it was going to be possible. It’s a very big event and here we are now, more then halfway sold on all of our tickets, had the biggest launch we’ve had on any event, sold the most tickets on the first day then any event we’ve ever done, I mean it’s just been incredible.

Q: You have a good lineup of music in store for the event. Was it chosen with the taco and beer theme in mind?

A: They totally were! The Offspring, with Dexter Holland who is the singer, actually owns a company called Gringo Bandito which is a hot sauce company. And Gringo Bandito, well you know ‘we’re alla bunch of gringos’, they like surf culture and taco fests and it made sense that we partnered up with them and the band. And there’s different opportunities, different artists and such so this lineup would come together. We’re really aiming for people in their high 30s and mid 40s so the bands reflect that like the Offspring, Sum 41, Rival Sons, Unwritten Law. There’s nostalgia there, you can’t go for an hour listening to the radio and not hearing an Offsprings song. They’re cool, we’re really excited about the music. And then we’ve got Metalachi, we wanted them a lot. They were on America’s Got Talent last year. With the Lucha Libre wrestling too, there will be so much energy. I’m stoked! We’re also going to have a taco eating contest, I can’t say the details yet but it’s going to be exciting. It’s going to be a competitive taco eating contest with some professional eaters. It will be on the main stage and it’s going to be great. It will be brought to you by Chronic Tacos and Gringo Bandito.

Tickets are on sale now for the Sabroso Craft Beer, Taco and Music Festival at Doeheny State Beach. Tickets are $60.00 for general admission. VIP Lounge and admission is $99.00, while VIP Lounge and Gringo Bandito Eat and Greet admission is $199.00. Designated driver admission and shuttle tickets for remote parking are also available. Tickets and information can be obtained at http://sabrosotacofest.com.

Ed is a native of Los Angeles who loves food and food cultures. Whether he's looking for the best ceviche in Colombia, the best poke in Hawaii, the best tequila in Jalisco or the best Taiwanese Beef Roll in Los Angeles, it's all good food! He also loves a good drink. He's had Mai Tais in Hawaii, Bourbon in Kentucky, Tequila in Mexico and Rum in Jamaica. His wine escapades have taken him to Napa, Sonoma, the Willamette Valley and the Santa Ynez Valley. And he's had beer all over the world! Music is another of Ed's passion, writing and interviewing many classic rock, rock and blues musicians. Getting the great stories of road experiences from them is a particular delight. Traveling also fits in with Ed's writing, exploring all over to find the most interesting places to visit, even in out of the way areas.
View all posts by Ed Simon →
This entry was posted in Events, Food, Music, News & Sports, Upcoming Events and tagged Artifex Brewing, beer, Brew Ha Ha Productions, Cameron Collins, Ed Simon, Gringo Bandito, KLOS, Lucha Libre wrestling, Metalachi, Offspring. Bookmark the permalink.