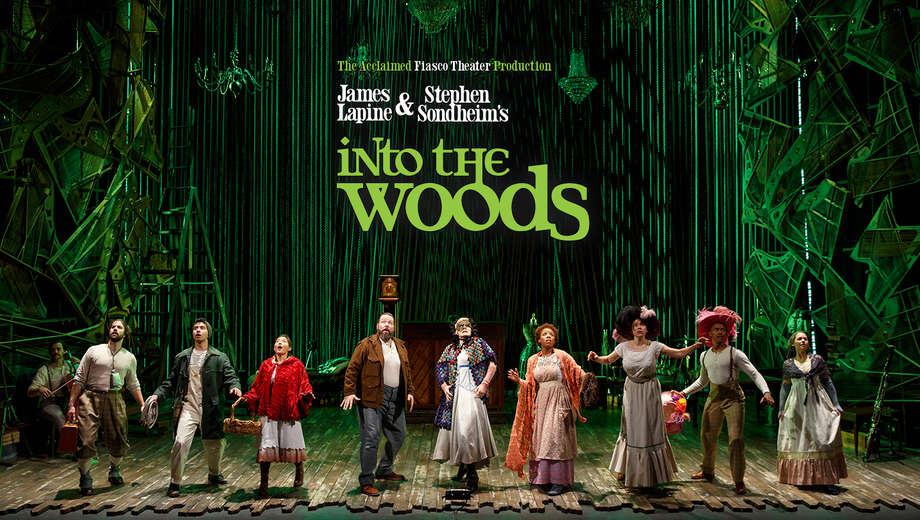 I’ve seen Stephen Sondheim and James Lapine’s “Into the Woods” on Broadway, in L.A. and on the screen. Obviously, I’m a super big fan of the show. But I have to say, this production, now playing at the Ahmanson, is by far my favorite and that’s thanks to the creative genius of the acclaimed Fiasco Theatre Company and directors Noah Brody.

Sondheim and and his partner Lapine, intertwines the plots of several Brothers Grimm and Charles Perrault fairy tales, exploring the consequences of the characters’ wishes and quests. We have Cinderella, her nasty step mommy along with her two very mean step sisters, (this time played by two men); Rapunzel, Two Princes, both charming, an evil  Witch (what would a fairy tale be without one?); Jack, the dude who planted magic beans and grew a beanstalk where a giant lived. He made the mistake of stealing the big guy’s gold, which really pissed him off. Then there’s a Baker and his wife, who desperately want a child, a Mysterious Man,  milky white cow, and lastly, Little Red Riding Hood and her stalker, the always hungry Wolf.

What makes this show so brilliant, original, super funny and just fabulous, besides the incredibly talented cast, is the imaginative production.  The amazing sets were created by Broadway veteran Derek McLane. The eleven actors, playing several parts at a drop of a hat, their incredible voices singing Sondheim’s beautiful, poignant lyrics, and their perfect comic timing, along with killer acting chops, makes this a must-see performance.

Joan was born in Brooklyn and spent many years working as an actress in New York City. Even though she traveled extensively, Joan couldn't imagine living anywhere else.. Well one day, she met someone at a party who regaled her with stories about living in L. A. specifically Topanga Canyon. A few weeks later she found herself on an airplane bound for Los Angeles. Joan immediately fell in love with the town and has been living here for the last twenty years and yes, she even made it to Topanga Canyon, where she now resides, surrounded by nature, deer, owls and all kinds of extraordinary alien creatures.. Joan continued acting, but for the last several years (besides reviewing plays and film) she has been writing screenplays. Joan was married to a filmmaker who created the cult classic films, (way before she knew him) Faces of Death. As a result of his huge following, they created a funny movie review show entitled Two Jews on Film, where Joan and her husband, John would review movies and rate them with bagels You can see their reviews by going to youtube.com/twojewsonfilm. Although it's now only one Jew - Joan is occasionally joined by her beautiful Pekingnese and Japanese Chin.
View all posts by Joan Alperin →
This entry was posted in Miscellanious, Theater and tagged Fiasco Theatre Company, into the woods. Bookmark the permalink.