Sabroso Craft Beer, Taco and Music Festival A Fun Day In The Sun At Dana Point 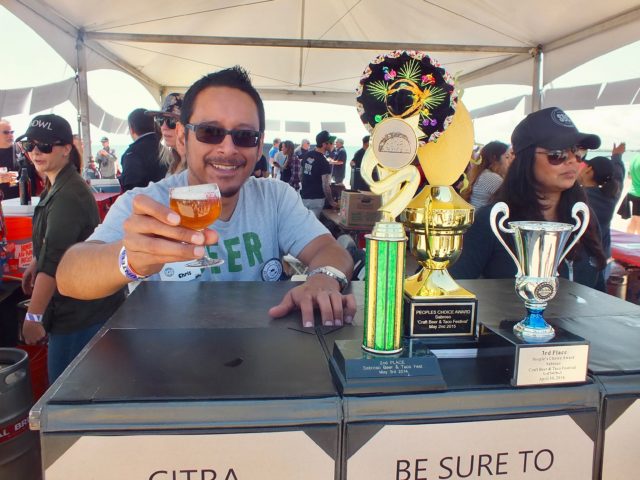 On a beautiful, sunny day at Doheny State Beach in Dana Point, a sellout crowd walked around the Sabroso Craft Beer, Taco and Music Festival, enjoying food and beer while listening to music from groups like Metalachi, Rival Son and Orange County favorite Lit. Guests, with sampling cup in hand, queued up at the beer tents on the beach, enjoying samples of pale ales, ciders, lagers, stouts, mead and many more types of delicious craft beers. Brewers such as Lagunitas Brewery, 2 Towns Ciderhouse, Belching Beaver Brewery, Breakwater Brewing Company, Pizza Port, Hangar 24, Noble Ale Works, Taps Brewery, Acoustic Ales, and over 30 others kept the crowd happy with plenty of the delicious nectar. 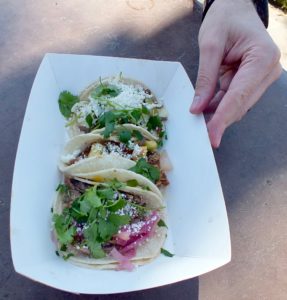 Over in the food section, food trucks and booths provided a multitude of tacos, chili fries and other things to eat. Local trucks such as the Meat Up Truck, Piaggio, Pink Taco, Ninjas With Attitude and Chunky Monkee were in attendance, along with booths from restaurants such as Haven Gastropub, Provisions, Pour Vida and many others. $3.00 tacos from the vendors gave everyone a chance to try a delicious variety of tacos, some traditional, and others wildly creative.

Chronic Tacos was there with not only a booth, but as the sponsor of the Gringo Bandito Chronic Tacos Taco Eating Challenge, along with Gringo Bandito Hot Sauce. Takeru Kobayashi, winner of the Nathan’s Hot Dog Eating Challange six times and holder of many world competitive eating records, was again crowned champion at the Sabroso Chronic Tacos Taco Eating Challenge (a title he has won several times before). He not only defended his previous title, but went on to eat 159 tacos in 10 minutes for the win and new record.

Lucha Libre wrestling also provided entertainment for the over 8,500 guests at the event. As dusk settled in and the sun set over the ocean, with the beer samples long gone, guests turned to many beer purveyors to purchase their drink of choice. Cups of beer from many of the breweries in attendance made sure that everyone could enjoy many of the high quality brews that they had sampled. Finally, the headliners of the music side of the event, local O. C. based band The Offspring, came on to delight their multitude of fans with their music. By the end of the set, happy and satiated fans filed out, everyone pleased with their day at the Sabroso Craft Beer, Taco and Music Festival. 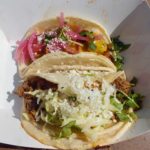 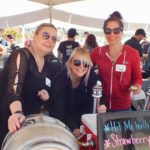 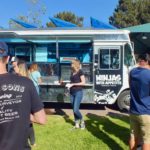 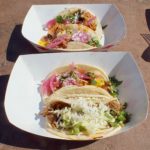 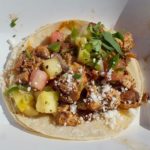 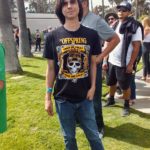 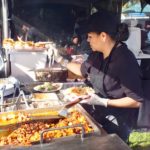 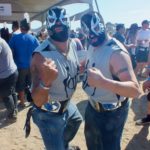 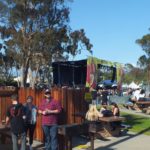 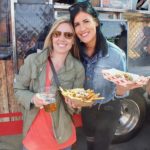 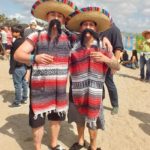 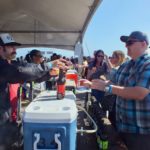 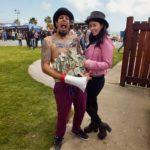 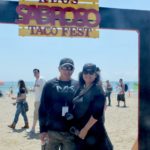 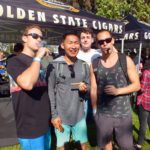 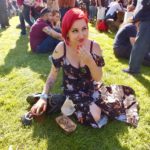 Enjoying food and beer at Sabroso. Photo by Ed Simon for The Los Angeles Beat. 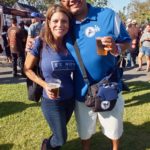 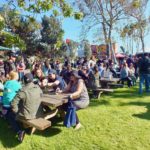 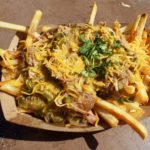 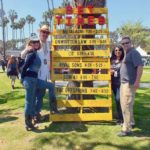 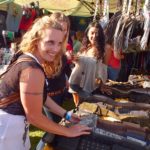 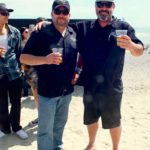 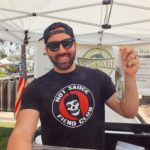 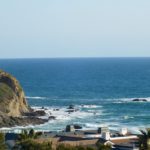 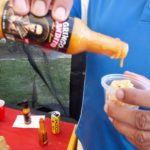 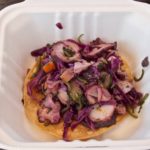 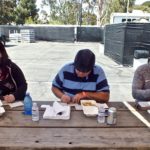 Ed is a native of Los Angeles who loves food and food cultures. Whether he's looking for the best ceviche in Colombia, the best poke in Hawaii, the best tequila in Jalisco or the best Taiwanese Beef Roll in Los Angeles, it's all good food! He also loves a good drink. He's had Mai Tais in Hawaii, Bourbon in Kentucky, Tequila in Mexico and Rum in Jamaica. His wine escapades have taken him to Napa, Sonoma, the Willamette Valley and the Santa Ynez Valley. And he's had beer all over the world! Music is another of Ed's passion, writing and interviewing many classic rock, rock and blues musicians. Getting the great stories of road experiences from them is a particular delight. Traveling also fits in with Ed's writing, exploring all over to find the most interesting places to visit, even in out of the way areas.
View all posts by Ed Simon →
This entry was posted in Events, Food, Miscellanious, Music, Photo Essays and tagged beer, Craft Beer, Ed Simon, Gringo Bandito, Lucha Libre, Sabroso, Sabroso Craft Beer, Taco and Music Festival, wrestling. Bookmark the permalink.