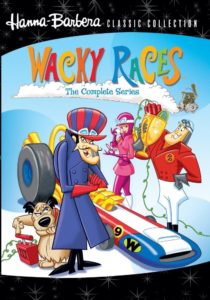 “Wacky Races” (1968, Warner Film Archives) Short-lived but well-loved animated series from Hanna-Barbera about an array of outlandish drivers locked in a cross-country race to claim the title of World’s Wackiest Racer. Conceived at the behest of Fred Silverman, VP of Programming at CBS, who sought to bring humor back to Saturday mornings, the series took its cues from Blake Edwards’ “The Great Race” (1965) – itself a tribute to Mack Sennett’s silent slapstick chase comedies – and added a huge cast of memorably eccentric and, at times, just plain weird characters and vehicles to the scenario. The silents also inform the show’s two primary characters – the Southern belle-styled Penelope Pitstop (voiced by Janet Waldo) and Dick Dastardly (Paul Winchell), a mustachioed heel who, with his perpetually snickering dog Muttley (Don Messick), did his worst to thwart her. But it’s the secondary competitors that put the wacky in “Wacky Races”: hairy Neanderthal siblings Rock and Gravel (who clearly anticipate Captain Caveman), who beat each other with clubs as they drive a boulder with wheels; the Ant Hill Mob, an octet of bite-sized gangsters (voiced by Winchell and Mel Blanc); hillbilly Luke and his hysterical pet bear in the pot-bellied stove-fueled Arkansas Chugabug, and so on. The inventive lunacy of these characters (created by “Super Friends” designer Jerry Eisenberg and the late, great Iwao Takamoto) suggests a sugar-cereal take on the “Mad Max” franchise, and undoubtedly counts for the show’s enduring popularity; despite running just 17 episodes, “Races” spawned two spin-offs – “The Perils of Penelope Pitstop” (with Paul Lynde voicing the villain) and “Dastardly and Muttley in their Flying Machines” – no less than six video games, and this well-appointed three-disc set offers the entire network run with two retrospective featurettes, a trivia track and commentaries with Eisenberg, Takamoto and others on several episodes. 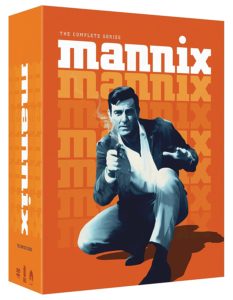 “Mannix” (1967-1975, CBS Home Video/Paramount Home Video) Fresno native and UCLA basketball star Mike Connors (born Krekor Ohanian) earned his best-known role as private eye Joe Mannix in this Emmy-nominated detective series for CBS. Created by Richard Levinson and William Link (“Columbo”) and developed by Bruce Geller (“Mission: Impossible”) for Desilu Productions, the show initially hinged on a clash between old-school detective Mannix and his employers at the computer-driven Intertect. By the second season, that notion was traded in for a traditional crime-solver framework, with Mannix operating his own agency in Los Angeles with the help of secretary Peggy (Emmy winner Gail Fisher, one of the few African-American series regulars on TV at that time). That format proved more successful, though the show’s appeal lay largely with Connors himself; though never a big star prior to the series, he had the right combination of physicality and charm to seem not only cool but also believable while handling a .38, driving a fleet of convertibles, planting a smooch on a female guest star or taking a beating. The producers laid a bit too much emphasis on the latter – sources have noted that Mannix was shot 17 times over the course of the show’s eight-year run – but Connors shouldering the plentiful action, a boss split-screen title sequence gilded by Lalo Schifrin’s jazzy theme all helped to make “Mannix” a favorite among armchair detectives in first-run and sporadic syndication. CBS/Paramount’s 48-disc set packages all 194 episodes of the series with a wealth of extras, including commentaries by and interviews with Connors, the original CBS promo from 1967 and a 1997 episode of “Diagnosis: Murder” with Connors returning as Mannix. For casual viewers, the key appeal will be watching which car Mannix pilots in the episode – the ’68 Dodge Dart GTS 340 convertible customized by George Barris earn top honors – or how many times he gets punched out (or punches someone out). There’s also a parade of pop culture faces in guest roles: everyone from Elsa Lanchester to Sid Haig, as well as Neil Diamond, Lou Rawls and even the Buffalo Springfield, who perform “Bluebird” on what looks like the faux Pandora’s Box set borrowed from “Riot on Sunset Strip.” 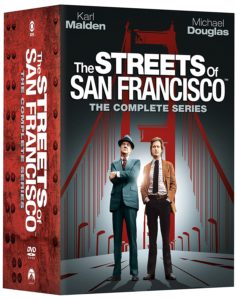 “The Streets of San Francisco” (1972-1977, CBS/Paramount) Popular crime drama from producer Quinn Martin (“The Fugitive”) hangs its premise on a well-worn trope – the Wise Old Cop partnered with the Brash Young Cop – but avoids the pitfalls inherent to that arrangement by casting two talented actors – Karl Malden and a pre-movie-star Michael Douglas (who was replaced in its final season by the late Richard Hatch) – with considerable chemistry in the roles. Years of crappy, hacky cop shows that appeared in the wake of “Streets” – as well as higher quality programs like “The Wire” or “Homicide,” which eschewed Martin’s penchant for moralization and tidy plot wrap-ups – have blunted the show’s efficacy for modern audiences, but vintage crime show fans will appreciate the formulaic nature of the stories – Malden and Douglas debate the best approach to solving the Crime of the Week before uniting their respective philosophies to solve the case – and the modern level of grit afforded by the Bay Area locations (showcased in the opening credits, which also boast a great theme song, here by Henry Mancini). Character actor spotters will also appreciate the array of guest star faces dotted throughout the 119 episodes; a casual perusal will turn up everyone from wrestler Tiger Joe Marsh and Clint Howard to a pre-“Star Wars” Mark Hamill, period heartthrobs David Soul, Larry Wilcox and Susan Dey (as an ersatz Manson Girl), and best of all, Arnold Schwarzenegger in his first television appearance (and quite good, too) as a disturbed body builder. The 32-disc set includes the original pilot, based on the novel “Poor, Poor Ophelia,” and a vintage interview with Malden and Douglas by Army Archerd. 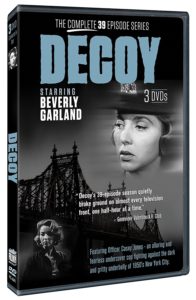 “Decoy” (1958, Film Chest Media) Television archaeologists with more substantial pedigrees than mine can confirm whether Film Chest’s claims – that “Decoy” was the first television program to focus on a female police officer and the first to shoot on location in New York City – are accurate, but what’s more significant about this rarely-seen, black-and-white crime series is its depiction of a policewoman as a capable figure and not window dressing or a romantic subplot for a male hero. Beverly Garland – a cult favorite for decades of film and TV, ranging from “It Conquered the World” to “My Three Sons” – is NYPD officer Casey Jones, who handles all manner of crime – from murder to arson and shoplifting – with an appealing balance of low-key professionalism and dry, mordant wit. Her cases are as tough as any faced by other TV cops and private eyes of the day, though it’s safe to say that none of them had to dress up like a harem dancer in order to infiltrate a crooked scheme (as Casey does to bust up a crime ring at Coney Island in “First Arrest”). Slap-and-tickle moments like those, however, are rare here; like its lead, “Decoy” is strictly business – it’s crime and the solution, with a minute at the end of each episode for Casey to address the audience and opine on the case in world-weary tones. An array of familiar faces provide solid support – Peter Falk, John Cassavetes, Suzanne Pleshette, Diane Ladd and future spaghetti Western superstar Tomas Milian (RIP) dot the 39 episodes – while direction and writing are handled by the likes of Stuart Rosenberg (“Brubaker”), among others. The city of New York, too, is a supporting player, and the locations visited by Casey include a pre-sleaze Times Square, Bellvue Hospital and the legendary Colony Record and Radio Center. But it’s Garland’s confident, no-nonsense turn as a policewoman free of, or at least unfazed by the discrimination and closed doors faced by professional women of the day (and today), that makes the series worth your investigation. Film Chest’s three-disc set includes liner notes which detail the show’s production history and short post-broadcast shelf life, as well as episode synopses and a list of locations seen on the program.

Paul Gaita lives in Sherman Oaks, California with his lovely wife and daughter. He has written for The Los Angeles Times, LA Weekly, Variety and The Fix, among many other publications, and was a home video reviewer for Amazon.com from 1998 to 2014. He has interviewed countless entertainment figures from both the A and Z lists, but his favorites remain Elmore Leonard, Ray Bradbury and George Newall, who created both Schoolhouse Rock and the Hai Karate aftershave commercials. He once shared a Thanksgiving dinner with celebrity astrologer Joyce Jillson, and regrettably, still owes the late character actor Charles Napier a dollar.
View all posts by Paul Gaita →
This entry was posted in Television and tagged CBS Home Video/Paramount Home Video, FIlm Chest Media Group, Warner Archives Collection. Bookmark the permalink.