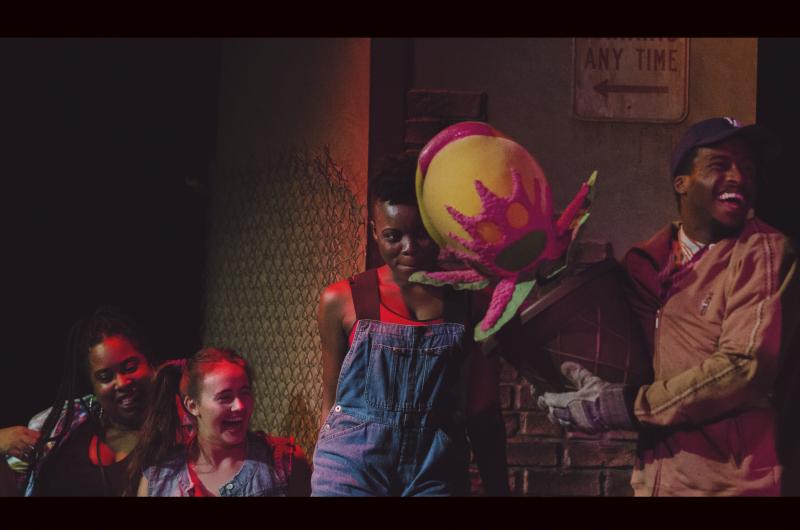 “Little Shop of Horrors” is a comedy rock musical by composer Alan Menken and Howard Ashman.  The musical is based on the low budget 1960 black comedy film of the same name.  It opened Off Broadway in 1982 where it played for five years. It has received numerous awards before moving to Broadway in 2003 and has since toured all over the country as well as the UK.

I’ve seen several productions of the play and I have to say that the one now playing at the Hillcrest Center for the Arts is absolutely wonderful.  Not only has director J. Bailey Burcham assembled a super talented cast but he has reset the musical in Skid Row in Los Angeles, 1994.

When the play opens, we meet Seymour Krelborn (the excellent Elijah Macomb) who is a poor orphan living on skid row.  He works in a flower shop and has a major crush on his co-worker, Audrey (the terrific Catriona Fray). Unfortunately for Seymour, Audrey is involved with Orin, (Rile Reavis) a sadistic dentist,  who derives great pleasure in beating her.

The flower shop owned by Mr. Mushnik (Paul Panico) is on the verge of closing due to lack of business, but that all changes when Seymour buys a sweet little plant which he names Audrey II (puppeteer, Lora Hakanson). Well, the plant doesn’t stay sweet for long.  In fact, after the plant almost dies from lack of eating, Seymour accidentally feeds it a drop of his blood and discovers what Audrey II needs to survive and it’s not plant food.

“Little Shop of Horrors” is filled with great music which combines Motown, 1960s rock and roll and doo-wop, and it has great characters that you can’t help but cheer for, as well as care about. Besides the two leads, Terika Jefferson (Crystal), Fay James (Ronnette) and Oliva van den Berg (Chiffon) make this a must-see musical.

Tickets are $25 with discounts for student and seniors. Tickets can be purchased by going to panicproductions.org, calling 805-381-1246 or visiting the box office.

Joan was born in Brooklyn and spent many years working as an actress in New York City. Even though she traveled extensively, Joan couldn't imagine living anywhere else.. Well one day, she met someone at a party who regaled her with stories about living in L. A. specifically Topanga Canyon. A few weeks later she found herself on an airplane bound for Los Angeles. Joan immediately fell in love with the town and has been living here for the last twenty years and yes, she even made it to Topanga Canyon, where she now resides, surrounded by nature, deer, owls and all kinds of extraordinary alien creatures.. Joan continued acting, but for the last several years (besides reviewing plays and film) she has been writing screenplays. Joan was married to a filmmaker who created the cult classic films, (way before she knew him) Faces of Death. As a result of his huge following, they created a funny movie review show entitled Two Jews on Film, where Joan and her husband, John would review movies and rate them with bagels You can see their reviews by going to youtube.com/twojewsonfilm. Although it's now only one Jew - Joan is occasionally joined by her beautiful Pekingnese and Japanese Chin.
View all posts by Joan Alperin →
This entry was posted in Fashion, Theater and tagged Hillcrest Center For The Arts, J. Bailey Burcham, little shop of horrors, skid row. Bookmark the permalink.