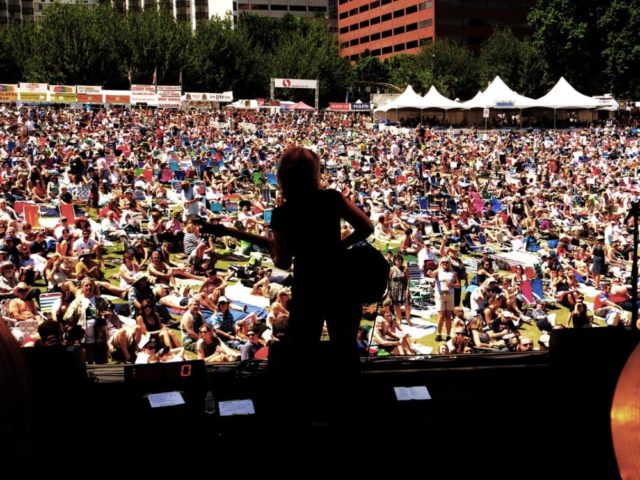 Lisa Mann has been playing the blues for years. Originally from West Virginia, she early on was transplanted to Portland, Oregon, where she’s been a professional musician most of her life. Her recent shows include the prestigious Waterfront Blues Festival in Portland, Oregon and the Boise Blues Festival. She recently won 8 awards from the Cascade Blues Association and has won Blues Music Awards from the Blues Association. Lisa sat down with me to discuss the blues, her singing and bass playing and her current CD’s. 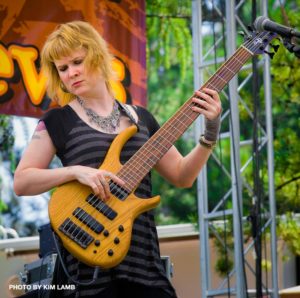 Q: Lisa, what is it about the blues that moves you?

A: When I first started playing and singing I was into those English bands that were into the blues. I was into Deep Purple, Black Sabbath and Cream and played rock for a long time. But, in about 1998 was when I started playing blues in the Portland area. I’ve been a professional musician all my life and it was just like coming home, because all those bass licks that I’d been playing and all those vocal styles that I’d been singing for years; I’d realized that this was where it all came from—from the blues. It had been moving me the whole time and I didn’t even know it. It was something that just works it’s way into your bones.

Q: You have a wide range of musical influences. Who are some of them and why?

A: It’s funny, because I have played a lot of styles in the past and most of the times I’ve been influenced by male artists, which might be kind of unusual, but Etta James was very influenced by Johnny ‘Guitar’ Watson for example. So some of them include B.B. King, Johnny ‘Guitar’ Watson and Little Milton have influenced me a lot, as well as those big blues belters like Etta James and Koko Taylor. I really love Big Maybelle too because she kind of had that jazzy Sarah Vaughan style as well. I just welcome anything that’s big and bold! That’s what grabs me.

Q: Last year, I sat down with legendary ‘Wrecking Crew’ bassist Max Bennett, who has played with everyone from Frank Sinatra, Ray Charles and Peggy Lee, to Elvis Presley, Joni Mitchell, Frank Zappa and the Beach Boys. He told me he played a six-string bass because it allowed him to do a lot of things with chords. Why do you like to play a six-string bass?

A: Kind of the same reason…..a lot of times I work in a trio, a power trio, so with the guitar doing solo I can play some double-stops and fill in the chords while he’s soloing. It applies to every style of music. I do some solo songs as well. I’ve performed At Last as a solo using the six-string bass. But mostly, that low string is the one that does a lot of the ‘heavy lifting’. There are a lot of songs that are in the key of C or the key of D. It’s just nice to have that really low, fat note to hold everything together.

Q: What’s the story behind your song “Hard Times, Bad Decisions.” It must have taken a lot for you to write that song.

A: It’s got some personal content to it, but it’s also fictional as well. I think there’s a lot of people who have had tough childhoods and once they grew up, couldn’t escape that karma. Once you grow up, you have to take responsibility for your own actions and you can’t say ‘well I was raised this way’, or ‘well this bad thing happened to me, so it’s OK for me to make these stupid decisions that harm myself and other people’. So basically it is about reaching out and trying to get out of that cycle, reaching out for help and asking for someone to help you get out of that bad spiral. We can’t get out on our own, we need someone—we need a helping hand. It’s important that we realize that we are the agents of our own lives now, so we can’t blame the past. We have to start thinking of good decisions now. And I’m hoping that the message will reach the right ears.

Q: Move On has some great bass work plus some sizzling vocals from you. What did you think musically in order to do that song?

A: The thing is, I don’t think about this stuff. I just write songs, or they write themselves–they just come up in my head. I just heard the bass line in my head and I started playing it and then I heard the vocals in my head, and I had a personal story that needed to come out at the time. My mother had passed away, I had lost my voice for a period of time—I was having a hard time. But they just come out however they’re going to come out. It’s like they’re little babies, melodies—it’s just important that I listen to them and let them out. I let them come out the way they want to come out and not try to think about it too much. If I think about a song I’m going to screw it up!

Q: Lisa, what’s your favorite story from the road?

A: I really enjoy taking detours on the road. One fun moment we had, years ago, we realized that if we took a half-hour detour we could go visit Devil’s Tower in Wyoming. It’s Devil’s Tower that’s in the movie “Close Encounters of the Third Kind.” When we got out of the car I didn’t realize that our keyboard player had cued up this keyboard app on his phone and he started playing the music tones from “Close Encounters,” ‘do do dah dah doo’. We got a good laugh out of that!

Here’s another fun one. We took a detour to Vasquez Rocks, in the Los Angeles area. That was featured prominently in some “Star Trek” episodes. There’s this scene where Captain Kirk fights this lizard-like creature called a Gorn. We’re all a bunch of Trekkers and I didn’t tell the band we were going to go there. We each took turns pretending we were Captain Kirk and filming these scenes. That was a lot of fun too!

Q: How did it feel to win a Blues Music Award?

A: It was outta sight! I was stunned and amazed. Both times I was nominated along with some really big names, musicians that I respect very deeply. It was a huge honor and a huge surprise.

I’m now nominated for a Blues Blast Music Award, by Blues Blast Magazine. I’m nominated in the Female Artist category. Folks can vote for me by visiting www.bluesblastmagazine.com.

Ed is a native of Los Angeles who loves food and food cultures. Whether he's looking for the best ceviche in Colombia, the best poke in Hawaii, the best tequila in Jalisco or the best Taiwanese Beef Roll in Los Angeles, it's all good food! He also loves a good drink. He's had Mai Tais in Hawaii, Bourbon in Kentucky, Tequila in Mexico and Rum in Jamaica. His wine escapades have taken him to Napa, Sonoma, the Willamette Valley and the Santa Ynez Valley. And he's had beer all over the world! Music is another of Ed's passion, writing and interviewing many classic rock, rock and blues musicians. Getting the great stories of road experiences from them is a particular delight. Traveling also fits in with Ed's writing, exploring all over to find the most interesting places to visit, even in out of the way areas.
View all posts by Ed Simon →
This entry was posted in Interviews, Miscellanious, Music and tagged #bass, Blues, Ed Simon, Lisa Mann, singer. Bookmark the permalink.