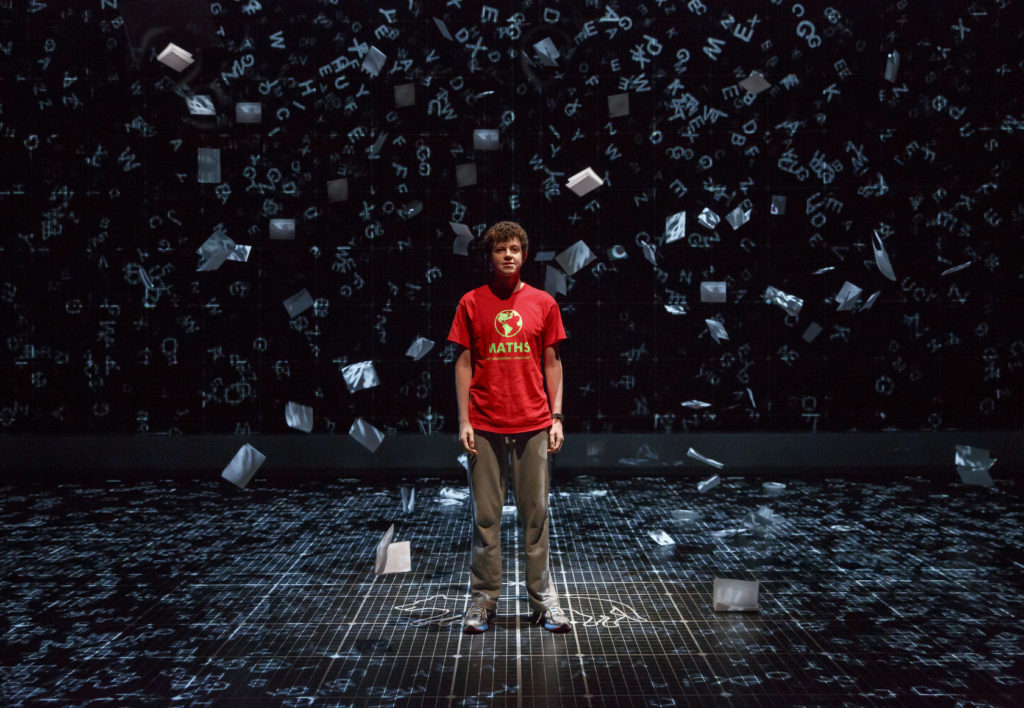 Adam Langdon as Christopher Boone in the touring production of The Curious Incident of the Dog in the Night-Time, Photo by Joan Marcus

‘The Curious Incident of the Dog in the Night-Time’ is based on the best selling novel written by Mark Haddon. It’s the story of a 15 year old math genius, Christopher Boone (the extraordinary Adam Langdon) a high-functioning boy who probably has  Asperger’s Syndrome even though his condition is never named.

Christopher lives in London with his father, Ed (Gene Gillette) attends a school for children with special needs run by a woman named Siobhan (Maria Elena Ramirez). Christopher, in fact, is quite exceptional. He thinks in numbers in a very abstract way that helps him understand the universe as well as the whole solar system. He cannot stand to be touched. He never tells a lie, is terrified of strange toilets, hates the color yellow, loves animals and never forgets anything.

One day Christopher discovers that his neighbor’s dog, Wellington  has been viciously stabbed with a garden fork and he is determined to find out who is the culprit.  This takes Christopher on a remarkable but perilous  journey which leads him to an earth-shattering discovery that will change his life forever.

“The Curious Incident of the Dog in the Night-Time’ is an unforgettable theatre experience unlike any other,  The set designed by Bunny Christie uses video projections, computer graphics, various sounds and lighting that takes you completely into the story in a very visceral way.

At one point, Christopher finds himself on the London subway. He has to rescue his pet rat who has jumped into the dangerous train tracks. As an audience member you feel that any minute a train is going to come and it’ll be lights out for Christopher’s pet.

This is just one of the amazing scenes in this incredible award winning play beautifully directed by Marianne Elliot and written by playwright Simon Stephens.  Do not miss it.  ‘

‘The Curious Incident of the Dog in the Night-time’ plays at the Ahmanson Theatre located at 135 North Grand Avenue, Los Angeles at 8pm Tuesdays-Fridays, 2 pm and 8 pm Saturdays and Sundays at 1pm and 6:30pm.  The show closes on Sunday, September 10th 2017.

Joan was born in Brooklyn and spent many years working as an actress in New York City. Even though she traveled extensively, Joan couldn't imagine living anywhere else.. Well one day, she met someone at a party who regaled her with stories about living in L. A. specifically Topanga Canyon. A few weeks later she found herself on an airplane bound for Los Angeles. Joan immediately fell in love with the town and has been living here for the last twenty years and yes, she even made it to Topanga Canyon, where she now resides, surrounded by nature, deer, owls and all kinds of extraordinary alien creatures.. Joan continued acting, but for the last several years (besides reviewing plays and film) she has been writing screenplays. Joan was married to a filmmaker who created the cult classic films, (way before she knew him) Faces of Death. As a result of his huge following, they created a funny movie review show entitled Two Jews on Film, where Joan and her husband, John would review movies and rate them with bagels You can see their reviews by going to youtube.com/twojewsonfilm. Although it's now only one Jew - Joan is occasionally joined by her beautiful Pekingnese and Japanese Chin.
View all posts by Joan Alperin →
This entry was posted in Theater and tagged 'The Curious Incident of the Dog In The Night-Time, Ahmanson Theatre, Play. Bookmark the permalink.