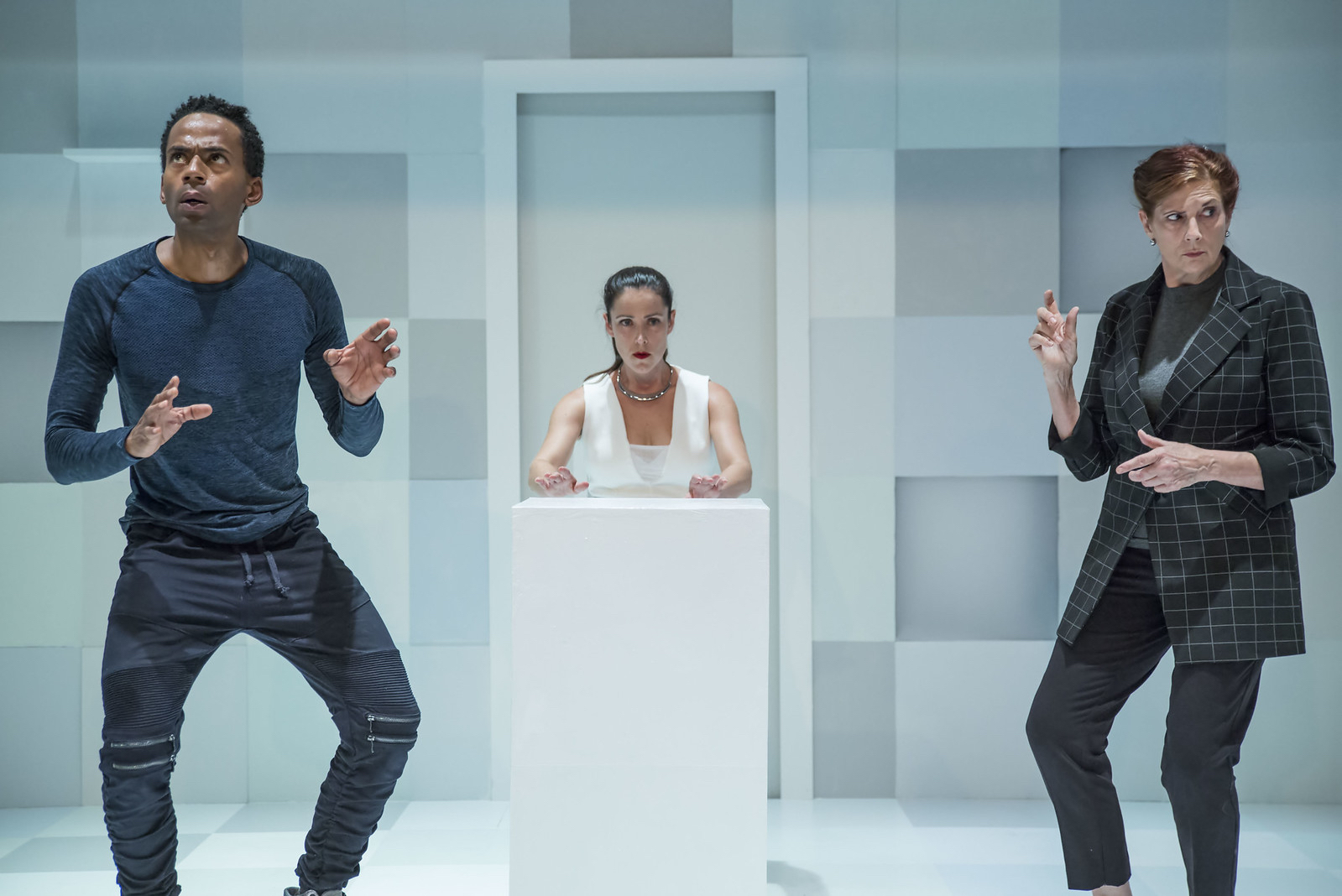 This play will have your guessing right up until the end. In fact, it had me guessing until the next day. Not only is “Welcome to the White Room,” written by Trish Harnetiaux, extremely funny, it will keep you thinking long after the curtain falls.

When the play opens, we discover Ms. White (Sierra Marcks) dressed completely in white, Mr. Paine (Chris Gardner), and a British woman named Jennings (Sarah Lily) arriving at The White Room, which was beautifully designed by Amanda Kenyans. The three characters are strangers to one another and they have no idea what they are supposed to do here.

As the play unfolds, we follow them on a journey, a very imaginative, funny, profound journey. They receive letters through a slot on the stage that only Ms. White can read. There is the arrival of The Last Deck of Cards in the World, which they wind up eating. There are also The Three Devices which must be figured out in order to advance to the next level.

Since the  actors speak in monotone and move somewhat awkwardly, it’s obvious that they are not humans, but characters (hint: A.I.) playing a game that their creator invented.

Somewhere between throwing  a party, suppressing sexual tensions and dancing a very hot, almost violent tango choreographed by Nancy Dobbs Owen, the characters  summon their puppeteer, Patrick (Reuben Uy) into their senseless world, leading them all towards a big surprise.

“Welcome to the White Room,” directed by Megan A. McGuane, is filled with complex, nuanced storytelling which uses lights and sound to bring you deeper and deeper into the story. The actors are pitch perfect in their performances making this a “must see” theatrical event.

‘The play runs through Saturday, September 16th at Theatre of Note, 1517 Cahuenga Blvd in Hollywood with performances on Fridays and Saturdays at 8pm, Sundays at 7pm. Tickets are $25.00; students and seniors $20. To purchase,  please call 323-856-8611 or visit www.theatreofnote.com.

Joan was born in Brooklyn and spent many years working as an actress in New York City. Even though she traveled extensively, Joan couldn't imagine living anywhere else.. Well one day, she met someone at a party who regaled her with stories about living in L. A. specifically Topanga Canyon. A few weeks later she found herself on an airplane bound for Los Angeles. Joan immediately fell in love with the town and has been living here for the last twenty years and yes, she even made it to Topanga Canyon, where she now resides, surrounded by nature, deer, owls and all kinds of extraordinary alien creatures.. Joan continued acting, but for the last several years (besides reviewing plays and film) she has been writing screenplays. Joan was married to a filmmaker who created the cult classic films, (way before she knew him) Faces of Death. As a result of his huge following, they created a funny movie review show entitled Two Jews on Film, where Joan and her husband, John would review movies and rate them with bagels You can see their reviews by going to youtube.com/twojewsonfilm. Although it's now only one Jew - Joan is occasionally joined by her beautiful Pekingnese and Japanese Chin.
View all posts by Joan Alperin →
This entry was posted in Theater and tagged 'Welcome to the White Room, Artificial Intelligence, Dark Comedy, Tango, Theatre of Note Hollywood. Bookmark the permalink.