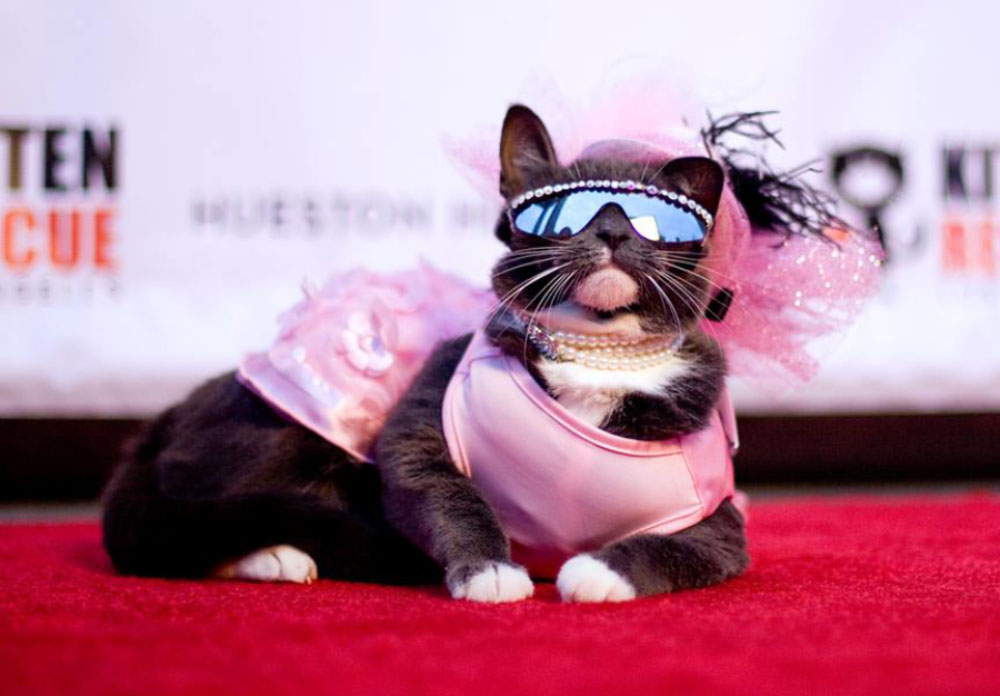 I always refer to myself as a ‘crazy animal person.’ I have to pet every dog I see and attend every dog and cat show in Los Angeles and beyond. All my animals have been rescues and I firmly believe that a dog, cat, pig, etc always knows when you save them.

My kitty Bonsai, who I adopted when he was 9 weeks old, lived to be 23 years old and my other rescue kitty, Kimba, who’s now six, is BFF with my three dogs, Alfie, Olive and Mango. So you can imagine how excited I was to find out that the Kitten Rescue’s 9th annual Fur Ball was coming up this month at The Skirball Center. This year’s event is extra special as this wonderful organization will be celebrating its 20th anniversary, bringing together animal lovers, donors, volunteers, celebrities, all working to save these beautiful creatures.

The Fur Ball evening includes a cocktail reception, delicious hors d’oeuvresa, an elegant vegan dinner, an open bar, entertainment, awards, a silent auction and so many other great events. There is something for everyone and most important, the money raised benefits the forgotten felines of Los Angeles.

Joan was born in Brooklyn and spent many years working as an actress in New York City. Even though she traveled extensively, Joan couldn't imagine living anywhere else.. Well one day, she met someone at a party who regaled her with stories about living in L. A. specifically Topanga Canyon. A few weeks later she found herself on an airplane bound for Los Angeles. Joan immediately fell in love with the town and has been living here for the last twenty years and yes, she even made it to Topanga Canyon, where she now resides, surrounded by nature, deer, owls and all kinds of extraordinary alien creatures.. Joan continued acting, but for the last several years (besides reviewing plays and film) she has been writing screenplays. Joan was married to a filmmaker who created the cult classic films, (way before she knew him) Faces of Death. As a result of his huge following, they created a funny movie review show entitled Two Jews on Film, where Joan and her husband, John would review movies and rate them with bagels You can see their reviews by going to youtube.com/twojewsonfilm. Although it's now only one Jew - Joan is occasionally joined by her beautiful Pekingnese and Japanese Chin.
View all posts by Joan Alperin →
This entry was posted in Events and tagged 9th Annual Kitten Rescue's Fur Ball, Cat Rescue Organization, Charity, skirball center. Bookmark the permalink.