Lee Rocker Talks About The Stray Cats and Rockabilly’s History 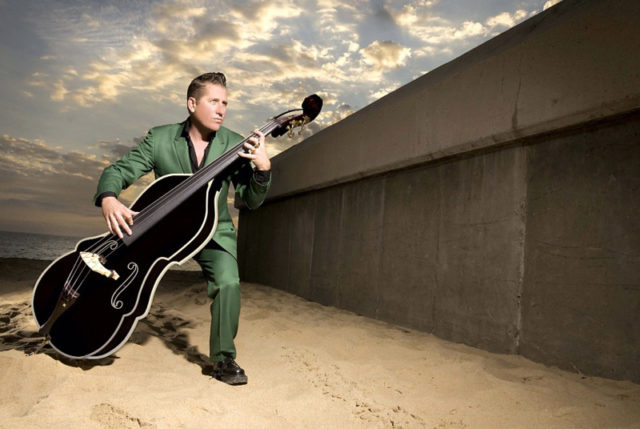 Lee Rocker has had great success in music. Starting young, from his career with his breakthrough band the Stray Cats, who sold 10 million albums and earned 23 gold and platinum records, Lee has gone on to make great music with Phantom Rocker and Slick and on to an excellent solo career. Besides being one of the acknowledged masters of the stand-up acoustic bass, Lee also plays some great rock on the electric bass. In 2014, he was awarded the Lifetime Achievement Award and featured on the cover of Bass Player Magazine, who said “Lee Rocker is one of the most influential bass players in the history of Rock and Roll”.

The Los Angeles Beat recently sat down with Lee to find out what he has been doing, share some musical history and talk about what’s coming up.

Q: Lee, who are your inspirations for your music?

A: I’ve got a couple. Certainly Carl Perkins is a huge inspiration in every way. He was a dear friend and just a big influence on me musically. Willie Dixon, as a bass player, was a huge influence. Bill Black, who was Elvis Presley’s bass player in the early days, the first few records, was also a big influence, so I would say theose are probably the primaries.

Q: When you first formed the Stray Cats in 1979, did you think you’d still be playing this kind of music now?

A: Back in 1979, I was was 17 years old and I don’t think I thought about anything! (Laughs) But I’m happy it turned out this way; its been a helluva journey! Things took off so quickly for me and the Cats in those early days, we moved from New York to London in the summer of ’79 and we did about four months of roughing it and sleeping in parks, bus stops and all-night movie theatres, four months of doing that and of course knocking on doors and playing lots of gigs. Things really took off and the record came about four months later, so my career literally was a ‘shot out of a cannon’.

Q: Rockabilly Boogie from Night Train to Memphis is a great song.

A: It’s a song that I always loved from the Johnny Burnette Trio. They wrote and recorded it in the ’50s. To me it’s one of the songs that is an anthem. If you have to pick a song to some one who doesn’t know or have heard rockabilly music then that’s the one. I wanted to really sink my teeth into it and have some fun and do it my way with my particular stamp on it. Night Train to Memphis is a record where we used a lot of classic rockabilly, stuff I hadn’t written. I just wanted to touch on some of the jams and do them with my stamp—put my touch on them.

Q: Cover Sessions has some interesting tunes on it. Honky Cat and City of New Orleans are some great choices. Why did you pick them?

A: That was a really interesting project for me, the Cover Sessions. It is a fairly recent project for me, one of the last two along with Night Train. I just wanted to take songs that—-if you have to categorize things—-I’d say it was more of an Americana record in a way. It certainly always had that thread of the upright bass going on. I wanted to take songs that I grew up with, the AM radio transistor songs that I listened to in my room as a teenager and put a twist on it, do something different to it.

Q: You’ve used several stand-up basses over the years. Is there one that’s your favorite?

A: I’ve got a lot of basses at this point. I really consider, at least in the studio, the ‘right tool for the job’, so it depends on the sound. Some of the basses I’ve got set up in a real traditional bluegrass way with gut strings and just mike it with a microphone in front. Another one is steel strings with an electric bass pickup. It really depends on what kind of sound I’m trying to achieve with that. Live, I really try to find one that’s ‘middle of the road’ for everything.

Q: Slap This Bass, off of Night Train to Memphis is a great tune. It really showcases your bass playing……

A: There are not that many songs really written about the bass. I wanted to write something for Night Train to Memphis that was my interpretation, my stamp on a lot of classic rock and roll/rockabilly songs. That came about with different riffs and various bass solos that I’ve been doing that I wanted to turn into one track that is all about the bass. That’s what it culminated in and I’m really happy about that track.

Q: You’ve played with greats like Carl Perkins, Scotty Moore (Elvis’ original guitarist), Ringo Starr, Eric Clapton, George Harrison and Willie Nelson. Do you have an interesting story about any of them?

A: Well, there have been so many……I’ve been doing a show, a theater concert and that’s the theme of it, the music of course but I also tell stories, there’s video on a screen and I talk about some of these episodes, some of these things that have happened over the years. I’ll give you one off the top of my head, it was around ’85 and I formed a band with my drummer Slim Jim (Jim O’Donnell) from the Cats and Earl Slick, who was David Bowie’s long time guitar player. We invited Keith Richards to play on the record, and he said ‘Yeah, I’ll be there’. A couple of days later, there’s a knock on the studio door and Keith is standing there with his guitar and a bin full of stuff. He played on the track and we were hanging out, we were having a blast. The song was called My Mistake and it’s a favorite track of mine, actually. On the way out of the studio later that night we noticed that Keith turned around, lifted a leopard jacket that I had on the back of a chair, he put it on and walked out with it. That’s apparently how you get a Rolling Stone to play on a record for you!

Q: You come from a musical family. It must have been awesome when you and your father were both Grammy-nominated in the same year……..

A: That was truly a magical thing. My dad, Stanley Drucker, was the principal clarinetist for the New York Philharmonic for more than 60 years. He was nominated for the Best Classical Soloist With An Orchestra in the same year that I got nominated for Best New Artist. My understanding is that this is the only time that this has happened, or there may be one other. A pretty amazing thing to have happen in your life!

Q: Your whole family was musical, so you must have had an interesting upbringing with that…….

A: That the best rule that we had growing up was that you played an instrument and you took lessons. That was one rule that I didn’t rebel against!

Q: One of my all-time favorite songs is Rock This Town. What’s the story behind it?

A: Rock This Town was really kind of a mirror, a reflection of what was going on. With the Stray Cats, the three of us always connected with an audience and it was just a party. When we first started, the first time we’d play someplace there would be 30 people, the next time 100 and the week after that 300. It just worked, it made people happy and that made us happy. I guess that’s the goal for music in general for me. It’s really about what was going on, going out on Saturday night with your girlfriend and having a blast and rocking the town.

Ed is a native of Los Angeles who loves food and food cultures. Whether he's looking for the best ceviche in Colombia, the best poke in Hawaii, the best tequila in Jalisco or the best Taiwanese Beef Roll in Los Angeles, it's all good food! He also loves a good drink. He's had Mai Tais in Hawaii, Bourbon in Kentucky, Tequila in Mexico and Rum in Jamaica. His wine escapades have taken him to Napa, Sonoma, the Willamette Valley and the Santa Ynez Valley. And he's had beer all over the world! Music is another of Ed's passion, writing and interviewing many classic rock, rock and blues musicians. Getting the great stories of road experiences from them is a particular delight. Traveling also fits in with Ed's writing, exploring all over to find the most interesting places to visit, even in out of the way areas.
View all posts by Ed Simon →
This entry was posted in Interviews, Miscellanious, Music and tagged #bass, Ed Simon, Lee Rocker, Rock This Town, rockabilly, Stray Cats. Bookmark the permalink.