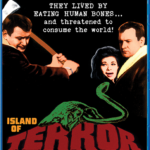 “Island of Terror” (1966, Shout Factory) Scientists working on a cure for cancer in a remote island laboratory discover that their experiments have an unexpected side effect: monstrous, tentacled amoebas devour that human bones! Energetic Saturday afternoon-style sci-fi from the UK and directed by Hammer Films vet Terence Fisher overcomes its silly monster design with the redoubtable presence of Peter Cushing as a stalwart pathologist and some surprisingly gruesome special effects. The Blu-ray includes commentary by Dr. Robert Kiss and the original trailer. 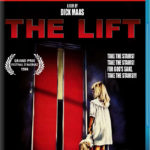 “The Lift” (1982, Blue Underground) Dutch director Dick Maas has an issue with elevators, as evidenced by this offbeat thriller about a high-rise office lift with a malevolent streak. The root cause is more science fiction than supernatural, and Maas is less interested in a body count than comic character quirks, but in terms of detailing all the ways one might die by elevator, “Lift” offers a fairly complete and grisly catalog. Maas remade the film for English-language audiences in 2001 as “Down,” which featured a pre-stardom Naomi Watts; it improves on the technical flaws of the source material but lacks the original’s off-kilter sensibilities. Both titles are available from Blue Underground in DVD/Blu-ray combos that include commentary by Maas and numerous cast and crew interviews. 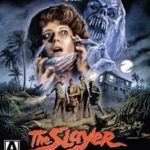 “The Slayer” (1982, Arrow Video) An impending storm isn’t the only danger facing three couples on a remote island, since one of their group recognizes their vacation spot as the same setting for her recurring dreams in which she is attacked by something inhuman. Ambitious early effort by J.S. Cardone is more psychological thriller than slasher/monster film; it tries to juggle too many multiple loose ends and interpretations of its goings-on, but the gloomy locations (Tybee Island, Georgia), a smattering of special effects, especially the brief appearance by the Slayer itself, and its historical significance (it, along with “Madhouse” – see below – was one of the original “video nasties” in the UK) should interest ’80s horror fans. Arrow’s Blu-ray includes interviews with and commentary by Cardone and his cast and crew, and audio/video of a recent screening before an enthusiastic audience on Tybee Island. 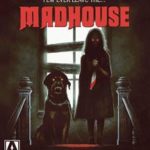 “Madhouse” (1981, Arrow Video) A young teacher’s visit to her twin sister, who’s locked away in a mental hospital, coincides with a string of grisly killings that appear to have involved a huge dog. Could her sister – who tormented the teacher as a child with such a dog – be responsible for this new slate of murders? The short answer is that it doesn’t really matter, since the chief appeal of this delirious Italian-made, American-lensed title by Ovidio G. Assonitis is the murder set-pieces, which are over-the-top exercises in low-budget gory excess. Horror devotees will note that Assonitis’s affinity for recycling from other films – his c.v. includes the “Jaws” carbon “Tentacles” and “Beyond the Door,” an amusing “Exorcist” clone – is in effect here, as evidenced by quotes from “Suspiria,” “Happy Birthday to Me” and others. Assonitis is the focus of an interview on the Arrow Blu-ray; you can also eyeball the opening credits for “There Was a Little Girl,” one of several alternate titles (and versions) under which the film was released.

Paul Gaita lives in Sherman Oaks, California with his lovely wife and daughter. He has written for The Los Angeles Times, LA Weekly, Variety and The Fix, among many other publications, and was a home video reviewer for Amazon.com from 1998 to 2014. He has interviewed countless entertainment figures from both the A and Z lists, but his favorites remain Elmore Leonard, Ray Bradbury and George Newall, who created both Schoolhouse Rock and the Hai Karate aftershave commercials. He once shared a Thanksgiving dinner with celebrity astrologer Joyce Jillson, and regrettably, still owes the late character actor Charles Napier a dollar.
View all posts by Paul Gaita →
This entry was posted in Movies and tagged Arrow Video, Blue Underground, shout factory. Bookmark the permalink.