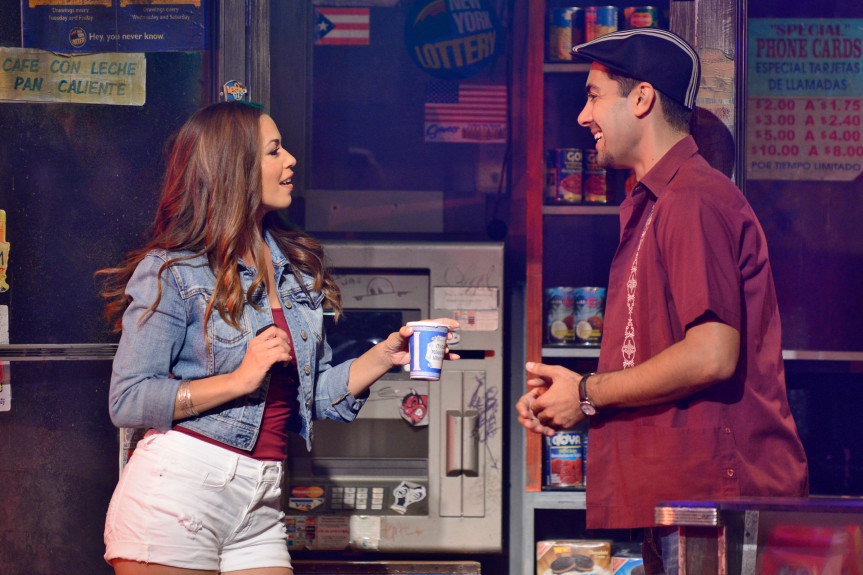 Caught in the Moment

When I saw ‘In the Heights’ on Broadway in 2008, I was not only blown away by the musical, but I was blown away by the performance of the man who conceived the show and wrote the music and lyrics, Lin-Manuel Miranda . I knew immediately that he was going to be a hugh star and as everyone knows, that’s exactly what’s happened.

So when I decided to go see Musical Theatre West’s production of ‘In the Heights’ I was concerned that the lead, Perry Young (Usnavi) would not live up to the performance of Miranda. That worry was put aside as soon as Young walked on the stage and started rapping the first number in the show. He nailed the part that Miranda made famous and as far as the rest of the cast, they were equally as fantastic.

The play opens at the crack of dawn and it’s he hottest day of summer. Usnavi chases away a graffiti artist from his tiny bodega in Washington Heights, and it’s from here we meet the other fully developed characters of ‘In the Heights’ starting with Nina Rosario (the wonderful Alyssa Gomez) who is back from her freshman year at Stanford University. She’s the first one in her family to go to college and her parents, as well as the whole neighborhood, are extremely proud of her. Only problem is, Nina has dropped out of school and she’s trying to  figure out how to tell her parents, Kevin (Mario Rocha) and Camila (Merissa Haddad) the news.

At the same time, Nina’s folks are busy trying to get a loan for their struggling taxi business, so hey leave their young employee, Benny (Carleton Bluford) in charge. It’s obvious that Benny is secretly in love with Nina and she feels the same way about him to  the dismay of her parents.

At the hair salon across the street, run by Daniela (the fabulous, Briana Bonilla) we encounter Vanessa, (super talented Teresa Castillo) who Usnavi has a major crush on. Only problem is Vanessa dreams of escaping Washington Heights and moving to the West Village. She’s even found the perfect studio apartment and is waiting to see if her credit is good enough to get approved.

As the play goes on, we meet many more interesting, colorful characters, including Usnavi’s aunt, Abuela (the excellent, Candida Celaya) and Sonny (Andrew Joseph Perez) who works in the Bodega.

‘In the Heights’ is a cutting edge musical masterpiece. It won the 2008 Tony Awards for ‘Best Musical,’, Best Score,’ Best Choreography and ‘Best Orchestrations.’ It’s a show that will capture your heart no matter what your age with its universal theme of chasing your dreams and finding your true home.  If you see only one show this year, this is the one to see.

Tickets are available at the Musical theatre West Tcket Office or by calling 562-856-1999, ext.4 or online at www.musical.org. The Carpenter Performing Arts Center is located at 6200 E. Atherton, Long Beach CA 90815.

Joan was born in Brooklyn and spent many years working as an actress in New York City. Even though she traveled extensively, Joan couldn't imagine living anywhere else.. Well one day, she met someone at a party who regaled her with stories about living in L. A. specifically Topanga Canyon. A few weeks later she found herself on an airplane bound for Los Angeles. Joan immediately fell in love with the town and has been living here for the last twenty years and yes, she even made it to Topanga Canyon, where she now resides, surrounded by nature, deer, owls and all kinds of extraordinary alien creatures.. Joan continued acting, but for the last several years (besides reviewing plays and film) she has been writing screenplays. Joan was married to a filmmaker who created the cult classic films, (way before she knew him) Faces of Death. As a result of his huge following, they created a funny movie review show entitled Two Jews on Film, where Joan and her husband, John would review movies and rate them with bagels You can see their reviews by going to youtube.com/twojewsonfilm. Although it's now only one Jew - Joan is occasionally joined by her beautiful Pekingnese and Japanese Chin.
View all posts by Joan Alperin →
This entry was posted in Movies, Theater and tagged 'In the Heights' musical, Lin Manuel-Miranda, Musical Theatre West, Tony Award Winner. Bookmark the permalink.