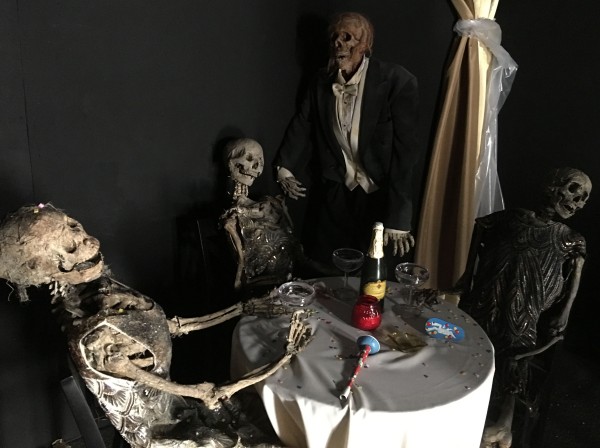 The other day my friend and I were talking about why we both love to be scared. Why do we walk around pitch black mazes where monsters jump out and scare us?  The answer we came up with is that it’s an adrenal rush, yet we know that we’re safe. We’re never in any real danger. So that’s why we go out of our way to find really scary events to attend during the Halloween season. And nothing is more terrifying than ‘Horror Nights at Universal Studios’.

After all, Universal is responsible for some of the scariest television programs, including ‘The Walking Dead’ and “American Horror Story: Roanoke.” Plus, we must not forget that this is the movie studio that invented the horror film genre some 80 years ago. Universal Studios created all of the classic monsters, including Frankenstein, The Wolf Man and the Creature from the Black Lagoon. Stanley Kubrick’s ‘The Shining’, ‘Insidious:Beyond the Further’, ‘The Purge’, ‘Saw: The Games of Jigsaw’, ‘Ash vs.Evil Dead’ are just some of their later horror films that have given us the best scares.

“Halloween Horror Nights’ brings together the sickest minds in horror to immerse you in a living, breathing, three dimensional world of terror” and I can’t wait to experience them all! There will be 8 terrifying mazes created by the genius mind of John Murdy, that are all based on Universal’s most frightening films and television shows, as well as the Titans of Terror Tram hosted by Chucky, and an all new high energy Jabbawockeez live show. There will also be three new scare zones awaiting you around every dark corner.

Get ready to meet some your favorite characters that have terrified you over the years, including Freddy, Jason and Leatherface. I can’t think of a better way to enjoy the Halloween season.

The Scarefest runs through November 4th. Go to the website to purchase tickets and get discounts. I’d suggest doing it quickly, because online sales are only available while supplies last.

Joan was born in Brooklyn and spent many years working as an actress in New York City. Even though she traveled extensively, Joan couldn't imagine living anywhere else.. Well one day, she met someone at a party who regaled her with stories about living in L. A. specifically Topanga Canyon. A few weeks later she found herself on an airplane bound for Los Angeles. Joan immediately fell in love with the town and has been living here for the last twenty years and yes, she even made it to Topanga Canyon, where she now resides, surrounded by nature, deer, owls and all kinds of extraordinary alien creatures.. Joan continued acting, but for the last several years (besides reviewing plays and film) she has been writing screenplays. Joan was married to a filmmaker who created the cult classic films, (way before she knew him) Faces of Death. As a result of his huge following, they created a funny movie review show entitled Two Jews on Film, where Joan and her husband, John would review movies and rate them with bagels You can see their reviews by going to youtube.com/twojewsonfilm. Although it's now only one Jew - Joan is occasionally joined by her beautiful Pekingnese and Japanese Chin.
View all posts by Joan Alperin →
This entry was posted in Events and tagged Universal Studios- Halloween Horror Nights. Bookmark the permalink.