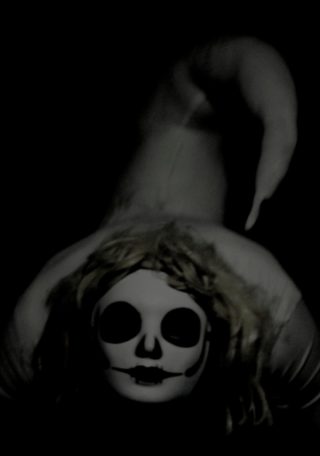 Located at 4850 Lankershim Blvd in the blackened heart of the NoHo theater district is the Zombie Joe Underground — a cracker box of a theater with no remarkable exterior clues as to what remarkable slices of madness lie within. It’s a considerable claim that few people in the greater L.A. area are willing to commit themselves to — baring it all (and I mean bare it all in all senses) and live up to it like Zombie Joe and his talented crew of directors and actors can. The effect it has on people coming in for the first time, who don’t know that what can transpire in an only hour can pack a visceral and emotional wallop.

Out of the front door comes a gentle giant of a man with a gracious nature who attends to all in line. He reminds me a great of a real mortician from back east who has constructed a playfully spooky mini golf course in the basement of the funeral home when services are not in session. His goal is to lessen the fear of guests at an early age. Joe is strictly adult entertainment and he also plays a bit rough. In his own words, Zombie Joe uses the techniques of “Black Box” theater to offer dramatics he calls “Theater Of Pain.” It’s a risky and intense format, but Joe is a firm believer in taking those risks to get to the nitty gritty of some wild and personal stuff.

As with classic shock films such as Deliverance or Funny Game, and with the gruesome artiness of Eyes Without A Face, there are times when certain audience members feel like they have to take flight from the marvelous assault they are receiving to the senses. After my first viewing of Urban Death, I was impressed to a degree that is rare to my theater going experiences, being that I am more of a cinema guy. Tour of Terror is a shorter version of his long-running piece. Urban Death is an homage to the DIY method of building a haunted house in your garage.

It begins an ends with a darkened maze with only a pin spot flashlight to barely guide your way though a twilight zone of mad people with very little clothing on. After a 15-minute “best of Urban death black out scenes,” you retrace your steps in the maze only to find that the shocks are not repeated, but extended. I’ve never seen space and darkness manipulated so expertly. As stated before, the small theater is little more than a black box with a tiny balcony for the occasional performer. When darkness descends for the first act you are immersed in darkness and the cast moves unheard in front of you and around you, cued by pieces of glow tape on the floor and walls. When the lights come up, you’ll have no idea of what craziness and invasion of personal space to expect, unless you’ve experienced it once before.

Unlike the Grand Guignol, which focuses the one act play format on gory morality tales, Joe’s wordless exposures pares back the layers and takes death, madness, loss and body horror to its bare essentials, usually in less than twenty seconds for each unrelated black out. It’s not unlikely you’ll encounter zombies, cyst fetishists, hatred of infants and necrophilia at the pace of a whirling dervish. I once saw a guy lick up mayo off the stage floor from an overgrown faux zit. Does William Shatner have commitment like that?  Currently there are about 450 separate mini shocks, and they are constantly refining it.

Jana Wimer and Zombie Joe have lightened the fare a tad for the Halloween season, but not much. Whatever they present is aimed to please, and it is presented in a novel fashion. I once saw a play about zombies taking over Park LaBrea there and the classic lesbian vampire tale Carmilla was updated successfully to Nazi Germany. This kicks the crap out of most haunted hay rides.

Urban Death: Tour Of Terror runs through this weekend and Monday and Tuesday nights. Tickets are only $15.00 dollars and can be purchased here.

Dukey Flyswatter, (AKA Michael), is a native Angeleno with strong roots in the underground scene since the 70's. He is a screenwriter (Blood Diner, Star Slammer), actor(Surf Nazis Must Die, Betty Page:Dark Angel, etc.), freelance writer. He is best known for his Horror Metal rock group, Haunted Garage, which he founded in the 80's and has now reformed, with him taking his usual role as lyricist and singer.
View all posts by Dukey Flyswatter →
This entry was posted in Art, Attractions, Theater, Upcoming Events. Bookmark the permalink.