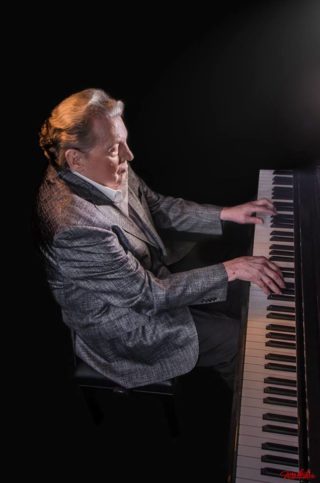 The Killer in his element. Photo courtesy of Goldenvoice.

The Theatre at Ace Hotel, a gilded grand dame of the silent movie age that has been lovingly refurbished in recent years, resides over downtown Los Angeles like an ancient star, with faded glamor and many stories to tell. It seemed appropriate that she should play host to Jerry Lee Lewis – a rock’n’roll legend around the same age as the theater – who still loves to wear a gold suit, while belting out some of the most beloved rock’n’roll songs ever recorded.

Jerry Lee Lewis is such a larger-than-life character that it’s easy to overlook his music and become swept up in the legendary stories that have contributed to his bad-boy, almost folkloric persona: kicked out of evangelical school for playing boogie-woogie; marrying his 13-year-old cousin; crashing into the gates of Elvis’s Graceland with his Lincoln Continental, armed and drunk. Some say he was responsible for the death of his fifth wife. A gospel-loving hell-raiser and close cousin of Jimmy Swaggart, he was apparently torn between his biblical beliefs and his feral stage shows that drove fans into a frenzy. He brings to mind Robert Duvall’s devout yet violent southern preacher in “The Apostle” (or maybe it’s the other way around). Even the Sex Pistol’s Steve Jones’ sounded scared to death when he interviewed Lewis on his radio show.

Someone with an overactive imagination like me can easily get carried away with all the stories, though, and forget that he’s simply one of the best rock’n’roll performers who’s ever lived. I half-expected him to appear onstage in a roar of flames, blonde curls falling over his wild eyes as he attacked the piano. In the real world, of course, Lewis is hardly a fiery, piano-playing demon; instead, he’s a somewhat frail 82-year-old man, who had to be led carefully to the piano onstage by assistants. (I will admit that, having heard in recent years that he was not well, that my expectations were low; I was just happy to be in the same room with rock’n’roll royalty.) 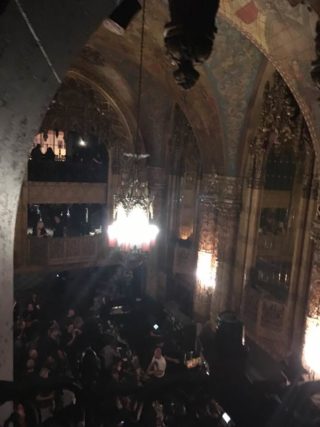 The Theatre at Ace Hotel is ready for its close-up.

As soon as he sat on the piano bench, any appearance of frailty was soon gone. Launching into “Down the Line,” his voice was loud, clear, and commanding. His hands, still strong, muscular, and able to play country arpeggios as well as pounding boogie-woogie, seemed to be a separate entity from his hunched-over frame; his hands flew over the piano as they always have, while the rest of him remained still.

After playing “Drinkin Wine Spo-Dee-O-De,” a familiar bearded figure with silver hair and an acoustic guitar walked onstage: Kris Kristofferson.  He joined Lewis in a seemingly unrehearsed duet of “Me & Bobby McGee.” Both sort of growled and ad-libbed through the song; it was wonderful, and the audience loved it.

The set was short, about 30 to 40 minutes (which was understandable, given Lewis’s advanced age), but it was an eclectic one. Among the rock’n’roll staples like “Whole Lotta Shakin’ Goin’ On” and “Great Balls of Fire” (as well as Chuck Berry’s “Roll Over Beethoven”), was a classic from his country era, “She Even Woke Me Up to Say Goodbye” and a version of “Georgia On My Mind,” performed in the style of Ray Charles. The band supporting Lewis were pros and respectfully held back, not overplaying, but giving Lewis what he needed, and letting him shine. I’m grateful that the piano was the loudest instrument onstage. (Does one have to be Jerry Lee Lewis to get a piano loud enough in the mix?)

At the end of the show, Jerry Lee kicked the piano bench over, and grinned broadly at the audience; they went wild. I worried for a second that he was going to attempt to stand up on the piano, or other such shenanigans probably not recommended for an 82-year-old. Instead, he grabbed his cane, and walked offstage on the arm of his assistant, waving to the audience as he left. He seemed truly happy, like he was having fun, and, dare I say, almost . . .  warm?

Still, I could feel his piercing dark eyes from all the way in the rafters. He may not be able to stomp up and down on the piano anymore, and maybe he doesn’t drive around crashing into mansion gates armed with a shotgun – but I still wouldn’t mess with him.

Opener Colter Wall, a Canadian singer-songwriter, was appropriately rootsy and low-key. The bearded, slender folksinger sang timeless songs, both traditional and original, in a deep baritone; he took the audience on a journey through railroads and women and drink. The deep timbre of his voice was complemented by his acoustic guitar (tuned to a dropped D); it gave it a booming, bass-like quality that resonated throughout the 1927 theater. Wall mentioned he was humbled to be opening up for Jerry Lee Lewis, and he provided the musical calm before the storm for an appreciative audience.

Carolyn Soyars is a freelance writter/blogger and musician, who performs under the name Carolyn Edwards. She has played with such critically acclaimed bands as 3D Picnic and The Negro Problem, and performs traditional folk music with her husband, Dave Soyars. For more info., see www.carolynsoyars.com for writing, and www.carolynedwards.com for music.
View all posts by Carolyn Soyars →
This entry was posted in Miscellanious. Bookmark the permalink.