Chill at the Queen Mary: Santa’s Got a Brand New Bag

Posted on December 19, 2017 by Dukey Flyswatter 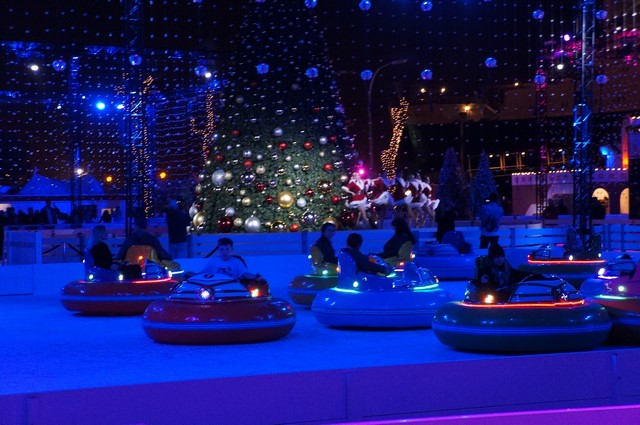 Chill at The Queen Mary. Photo by Elise Thompson for The LA Beat.

I was scrambling around all day trying to find some gloves to wear for the Chill at the Queen Mary. Apparently, I’d be throwing snowballs and scooting around on my wet butt on the ice slide. As it turns out, I was fine without them. The Chill wasn’t churning out man-made billows of ice and snow. Don’t be alarmed–there are plenty of frosty things to do with your kids (or that adventurous first date).

Although I almost did a face plant on the inner tube on the ice slide, I’d have to agree with the folks within earshot when I inquired about the ice sculptures in the dome during Chill’s early years. They said, “They finally found out that people won’t pay thirty bucks to get cold unless there is real white powder and a ski lift involved.” Another couple agreed, saying “This sure is better than that sh*t show they put on last year.” This may sound like a Grinchy way to open an article about the grand installation that is The Grey Ghost, but I assure you my point is to illustrate Value vs. Availability vs. Attitude. We were more than happy with our evening at Chill. Any time is a grand time to visit The Queen Mary, whether it be a winter wonderland or a tattoo convention during the summer.

The parking lot at the Queen Mary is on the steep side ($20.00), so Park at Shoreline Village and take a shuttle or Uber over to the Queen to check out her smokestacks decked out in small red, white and blue twinkle lights. If you’re a fan of Main Street at Disneyland, then you’ll sense the vibe right away. It’s joyfully old school, with a Charles Dickens atmosphere and hustle-bustle. All of Chill takes place outside the ship and does not go inside the old Spruce Goose dome as in years past.

With the exception of the Asian section of this Ice Adventure Park (Catchy, isn’t it?), the flavors are both literal and figurative old-world European. Expect lots of cold weather goodies like strudel, cheddar wurst, pretzels, fondue, chocolate, and cocktails. The ginger pork gyozas may not have smacked of an American Christmas, but they sure went down easy.

Every guest gets to pose with many folksy-type wanderers, like Pere Noel, The Ice Queen, and German carolers. Plus, they get to ride down the icy slopes on an inner tube and ride a giant rocking horse the size of an elephant. None of my friends would go with me, and I’m not gonna be that one solo chubby old man holding up the line while I climb on and off the horse so gingerly. but it is a heap of fun watching other people do it.

Other rides in the park charge various fees for children and adults. On the ice rink, the kids get cute push around bears and penguins for the sake of balance ($10 rental fee). Older kids and adults pay another fee for the zip line and the X Files-looking Ice Bumper Boats, which scoot you around effortlessly on a frozen artificial pond. Even a seemingly droll game of shuffleboard became exciting once the ice factor is added. Your kids can also make toys with the elves, or make a gingerbread house with a six-foot-tall gingerbread man. I’m not sure if these last two activities cost extra, because the lines were so long we could barely peek our heads in there.

If you’re in a good mood and you’ve got the coin come and do it, it’s a great time. Just be aware that Santa won’t take chocolate gelt for currency. Tree-lighting is at 7:30 every night, and fireworks go off at nine every Sunday.

Chill at the Queen Mary

is happening nightly through January 7th, with the exception of New Year’s Eve, starting at 4:30PM. Adult tickets start at $29.99 and kids under start at $19.99.

Dukey Flyswatter, (AKA Michael), is a native Angeleno with strong roots in the underground scene since the 70's. He is a screenwriter (Blood Diner, Star Slammer), actor(Surf Nazis Must Die, Betty Page:Dark Angel, etc.), freelance writer. He is best known for his Horror Metal rock group, Haunted Garage, which he founded in the 80's and has now reformed, with him taking his usual role as lyricist and singer.
View all posts by Dukey Flyswatter →
This entry was posted in Attractions, Events, Food. Bookmark the permalink.