Movies Till Dawn: What You Could Be Watching This Weekend (24 Hour Vampire Mission Edition) 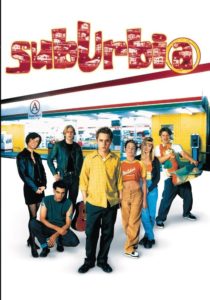 “subUrbia” (1996, Warner Archives Collection) Richard Linklater and Eric Bogosian transpose the setting of Bogosian’s play from a convenience store parking lot in Massachusetts to one in Texas, but keep its core premise, with a cross-section of disaffected high school grads grinding various axes of discontent and regret while awaiting the arrival of a former classmate, now enjoying stardom as a musician. As ’90s zeitgeist goes, “SubUrbia” benefits from Linklater’s attention to the details of small town life, a uniformly excellent cast, with Giovanni Ribisi (depressed), Steve Zahn (knucklehead) and Ajay Naidu (voice of reason) as stand-outs, and Bogosian’s dialogue, which retains its bite. The characters’ chronically disaffected nature may wear thin after two hours, but the film mostly avoids becoming a thudding checklist of slacker attitudes and cultural detritus like “Reality Bites.” The soundtrack is a cross-section of Clinton-era college radio staples (Girls Against Boys, Superchunk, Boss Hog, and two original songs by Sonic Youth). Warner’s DVD is widescreen and includes the theatrical trailer. 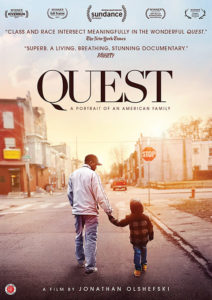 “Quest” (2017, First Run Features) The titular quest refers to both Christopher Rainey, a North Philadelphia resident and father, and the recording studio he operates for local hip-hop aspirants. But it’s also an apt label for the path that Rainey and his wife, Christine’a, seek in an attempt to raise their family and live their lives with a minimum of turmoil from the outside world and as much community and creativity as possible. Turmoil does come in the course of Jonathan Olshefski’s documentary, which takes place over the course of Obama’s two terms in office; a daughter is accidentally injured in a shooting, a son battles cancer, and Christopher’s most promising talent is beset by addiction. However, the film’s goal is not to document the struggle faced by the Raineys – a typical trope for urban-set film projects – but rather, how the family, like any family, moves forward and maintains on any emotional terrain, whether rocky or placid. It’s a remarkable feat, to make the ordinary compelling, but Olshefski’s patient, observant camera accomplishes that goal with the help of his exceptional subjects. 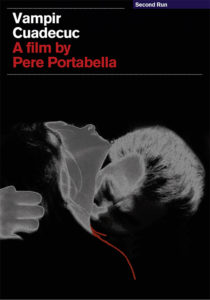 “Vampire Cuadecuc” (1971, Second Run DVD) Hypnotic experimental feature by Spanish director Pere Portabella, which at first blush, appears to be a (mostly) silent documentary about exploitation filmmaker Jesus Franco‘s “Count Dracula,” a fairly close adaptation of the Bram Stoker novel with Christopher Lee, Herbert Lom and Klaus Kinski, among others. But as Portabella’s images unspool – depicting either alternate angles of the movie or behind-the-scenes footage under Carlos Santos‘ industrial sound design – it becomes apparent that “Cuadecuc” (a Catalan term for either a “worm’s tail” or the unexposed end of a film roll) is less making-of featurette and more of a lyrical, occasionally playful meditation on film artifice and atmosphere, with the high-contrast cinematography creating a faux Gothic aura around Franco’s threadbare horror trappings. The disc’s liner notes argue for “Cuadecuc” as an allegory for Spanish dictator Generalissmo Franco‘s treatment of his people (draining them of freedom, Dracula style), but one doesn’t have to subscribe to that theory to appreciate Portabella’s unique and striking effort. Two additional short films by and an interview with the director are also included on the region-free Blu-ray from the UK-based label Second Run DVD. 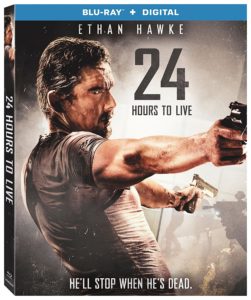 “24 Hours to Live“ (2017, Lionsgate) Frantic international production that filters the noir chestnut “DOA” through the relentless, synapse-detonating pace of modern action-thrillers like the “John Wick” franchise, whose producers also oversaw this film. Ethan Hawke stars as an assassin who appears to meet his end during his final assignment, only to be revived for a single day to retrieve valuable government information. That this does not sit well with Hawke, who spends the remainder of the running time settling various scores with maximum firepower, should surprise no one, since the film is almost resolutely unremarkable, save for a few set pieces, in which director Brian Smrz evokes better films than this one. Its chief appeal is Hawke, who has brought considerable gravity and grizzle to genre projects, some good (“In a Valley of Violence”) and others less so (like this one), since moving capably into middle-aged leading man status. Someone ought to give him an action series worthy of his talents; in the meantime, pictures like this will have to do. 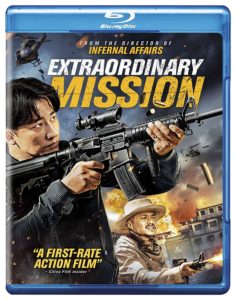 “Extraordinary Mission” (2017, Cinedigm) Gritty and well-crafted cop drama from China with Huang Xuan (“The Great Wall”) as an undercover police officer seeks to bring down a dangerous drug cartel chief (Duan Yihong) in Thailand by joining forces with him. As with “Infernal Affairs” and “The Departed,” co-director Alan Mak and writer Felix Chong‘s previous and best-known efforts (to Stateside audiences, at least), Huang’s deep dive into the cartel’s operations has a corrosive effect on his physical and moral well-being, which forces an inevitable violent showdown; if the plot trajectory feels familiar to most action fans, the creative team, which includes cinematographer/co-director Anthony Pun, invests equal care and energy into the characterizations (all expertly handled by the cast, including Jiadong Xing from “1911” as Huang’s boss) and the bullet-driven set pieces, which culminate in a jaw-dropping, near-half-hour siege. Cinedigm’s Blu-ray includes a making-of featurette and the original trailer.

Paul Gaita lives in Sherman Oaks, California with his lovely wife and daughter. He has written for The Los Angeles Times, LA Weekly, Variety and The Fix, among many other publications, and was a home video reviewer for Amazon.com from 1998 to 2014. He has interviewed countless entertainment figures from both the A and Z lists, but his favorites remain Elmore Leonard, Ray Bradbury and George Newall, who created both Schoolhouse Rock and the Hai Karate aftershave commercials. He once shared a Thanksgiving dinner with celebrity astrologer Joyce Jillson, and regrettably, still owes the late character actor Charles Napier a dollar.
View all posts by Paul Gaita →
This entry was posted in Movies and tagged Blu-ray, Cinedigm, DVD, First Run Features, Lionsgate, Second Run DVD, Warner Archives Collection. Bookmark the permalink.