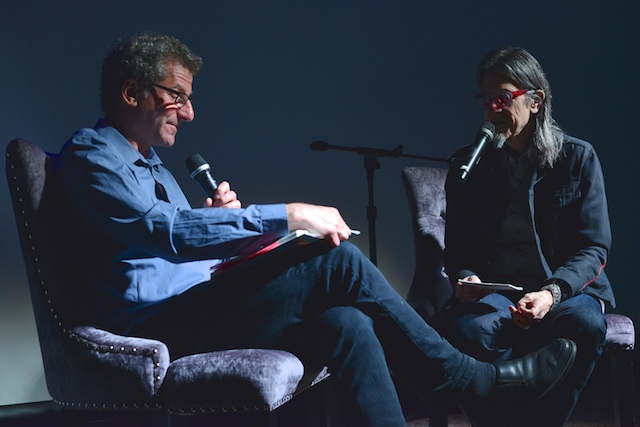 I was immediately attracted to the idea of covering Robert Gordon at The GRAMMY Museum for his new book and compilation album called “Memphis Rent Party“. I was more familiar with his youthful music career, not as aware of his contribution as a writer, but I’m not surprised by his obsession for roots music or the local musical traditions he grew up listening to in Memphis. On April 26th The GRAMMY Museum filled up with roots music enthusiast, advocates and aficionados to hear “The Music” and marvelous antidotal stories from music documentarian Robert Gordon’s own lips. An enraptured crowd listened intently to GRAMMY director Scott Goldman as he opened the proceedings with a conversational dialog about Gordon’s newest offering,”Memphis Rent Party”, leading up to his introduction of the man himself. Once both interviewer and interviewee’s seats were filled the “Memphis Rent Party” started in earnest, revealing the legacy of the Memphis music scene, its musicians and their music. 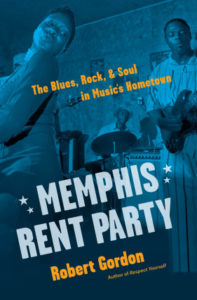 I think the quote from their conversation below that got my immediate attention from Gordon and Goldman’s interaction, while relating a story revolving around Sam Phillips and Elvis Presley early recording studio interactions revealing the character of Memphis’ music and its expression. Goldman stated as the interview kicked off by relating a story about Sam Phillips and his take on music by saying, “Speaking of Sam Phillips, he very eloquently described the difference between Nashville and Memphis…” Gordon then jumped in to build on the quote by Goldman by saying, “Someone asked Sam, Why are you doing this (the music) in Memphis? Why don’t you got to Nashville? He (Phillips) goes, “Nashville is a followers mentality”. Then Goldman jumped in by quoting Sam Phillips to Gordon, “Nashville is the pursuit of sounding like everybody else and Memphis was the pursuit of sounding like nobody else!” This was a definitive moment in my mind that guided the remaining hour of Gordon and Goldman’s conversation about “Memphis Rent Party” and the ideas that drove the stories of all of these Memphis musical artist, the power and the nuanced understanding of the Memphis music scene Gordon’s recanted with knowledge, unbridled enthusiasm and passion! 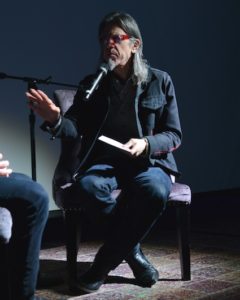 Scott Goldman at Memphis Rent Party at The GRAMMY Museum,

Gordon’s encounter with Furry Lewis happened after seeing him open for the Rolling Stones a few months earlier with this delightful story. Gordon eventually decided to call Furry Lewis, after he discovered that Furry lived in Memphis, on the phone for his first personal encounter with the bluesmen since the Rolling Stones concert. Quoting Gordon regarding that call went something like, “Hey Furry, can I bring you anything?,” and he said, “Bring me a raw Wendy’s hamburger and a pint of Ten High. This says a lot about Memphis in the mid-seventies. It was a lot easier for me, as a 15-year-old, to buy a pint of Ten High than it was to find the ride to Furry’s. I started going there (Furry’s Duplex) because it was an entrance to a whole other world. You know, I was from the suburbs. I was from a solidly middle class upbringing. I was visiting a guy who was living in a duplex, and when you walked in, his bed was immediately to the left. He was very impoverished. Furry kept a jelly jar lid on his shot glass. I asked him, “Why do you put the jelly jar lid on your shot glass?” He would often refer to himself in the third person, and he said, “Furry doesn’t want to get bit by a spider on his lip. We don’t have that problem in my house. Me and (meeting) Furry at that age was a way to question everything I thought I understood about life.” This is where Goldman jumps in the conversation to say, “It struck me, that it’s the difference in playing the Blues and living them”. Gordon then took it a little further by saying, “I think, later, when I was writing “It Came from Memphis“, reflecting back. I realized, my whole understanding music as, not just as a, you know, this musical art form, but music was an expression of how people lived came from visiting Furry Lewis and making those connections.” 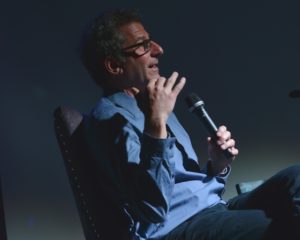 Goldman pulled out his own copy of Memphis Rent Party with pages he had divided with post-it-notes to have Gordon read a couple special and salient passages from the book that spoke so much about the Memphis sound and the cultural ethos that drove the music, in particular, Jim Dickinson, who became a music producer and quantified the “Southern Sound” of producing. Goldman says, “We talked about this upstairs. A fascinating philosophy that he had when he became a producer about “Southern Production”. and what it meant to be a “Southern Producer”.

He had a particular sense about that, and a particular idea and I want you to read this passage here. Just those couple of paragraphs, which explains.

“Gordon then exclaims after he saw the passage, ‘Oh yeah, this is great! Okay, this was from my first interview with Jim and I ran it as a Q&A:'”

“So, I picked up Peter Guralnick’s “Sweet Soul Music” when it came out in 83′ and I remember picking up Lost Highway and I didn’t buy Lost Highway. In 83′, I’m like 22, what can this guy teach me about my hometown. So I bought Sweet Soul Music and I was blown away! Oh my God, there is so much here I didn’t know and that made me go back and interview Jim the next time I was home.”

Gordon, now reading the passages about Jim, says, “Think about silence. Silence is a thing in space and when you break silence you create rhythm. You divide the nothing with something. I think that as a producer my part of the production is the space between the notes. It’s what enables me to do different types of music. I think the artist brings the identity to the record, but what I bring is a series of flavors. I’ve said before that production is the barbecue sauce. You straight people, there’s rockers, (this is not about gender, this is not about sexuality Gordon qualified), this is about (who) you are or you aren’t … Straight people are afraid of artists and I’m an artist and a lot of producers aren’t! That scares record company people. The idea that this guy thinks it’s art, not business. The desire to make records, you’ve got to take it back to the primal urge. It is literally the fear of extinction. It’s the wish to record the unretainable nature of the moment. Time is going away from us and the art wish is the desire to retain the moment. By recording and playing back you have made time into space. You have captured the moment! It goes back to the cave paintings. The hand printed on the wall at the back of the cave. The idea of drawing on the wall (means) you affect reality. You can, in fact, alter the moment and recreate it. And that’s what as a producer I try to do. The event has a soul. It’s the essence of the event that you record and the whole idea of immortality is right there!”

I chose the above excerpts to portray the vitality of interview and thus the ideas that drive this book.  This interview between Gordon and Goldman continued for far beyond this point and proceeded for nearly an hour more, full of glorious details of the idiosyncratic characters that made up the Memphis music scene. These stories were both earthy and rapturous, detailed and enlightening, giving you the feeling you were a little closer to the music and the skewed reality of Memphis’ marvelous musical underbelly. These two aficionados’ banter proved illuminating about these fascinating and influential musicians. Some of them are legendary, while others were influential but never received popular exposure.

There was story after story shared between Gordon and Goldman revealing how tantalizing Memphis Rent Party must be as a tome of literature to prowl through, as well as tribute to Memphis’ musical heritage. It’s a worthy read for anyone looking for a wondrous joyride with these eccentrics. For those who love music, it is a must read to complete anyone’s knowledge on a lexicon of foundational American music.

Memphis Rent Party paints a vivid picture of a vital music scene that has influenced America and the world with the wellspring of the Memphis sound for well over a half century! Buy the book and buy the album to be fully immersed in what made Memphis unique and revelatory to music lovers everywhere!

Billy Bennight is a writer, photographer and wardrobe stylist with expertise and years of experience in these disciplines. His musical youth started as a Punk Rocker and has expanded into exploring many genres of music, with an keen interest in art, fashion, photography and writing. He shoots celebrity events and red carpets for The Photo Access and ZUMA Press. He is a member of the Los Angeles Art Association. His images have been published in The Los Angeles Times, People Magazine, Wall Street Journal and Vanity Fair. He's very engaged in life. You can follow him on his Facebook page at: www.facebook.com/billybennightartist and on Instagram and Twitter @billybennight
View all posts by Billy Bennight →
This entry was posted in Books, Miscellanious, Music, News & Sports and tagged Billy Bennight, Blues, Elvis Presley, Furry Lewis, grammy museum, Jim Dickinson, Memphis, Memphis Music, Music, Robert Gordon, Rock and roll, Sam Phillips, Scott Goldman, Sweet Soul Music. Bookmark the permalink.