Movies Till Dawn: “Izzy Gets the F*ck Across Town” 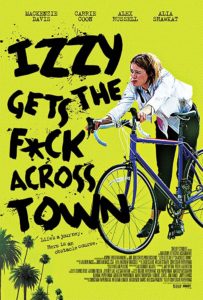 “Izzy” isn’t on DVD/Blu-ray yet – it premiered to acclaim at the 2017 Los Angeles Film Festival and opens in theaters courtesy of Shout Factory on June 22 – but it deserves your time away from home all the same, if for no other reason than to see Mackenzie Davis‘ magnetic turn as the titular Izzie, a loose cannon in caterer’s clothing who takes it upon herself to stop her ex-boyfriend’s engagement party, which is way the fuck across town in Los Feliz from her current position, prone and hungover in the Westside bedroom of a one-night stand. Her wobbly path puts in her contact with a host of Angeleno eccentrics, some sympathetic, like Annie Potts (perfectly cast as a kind soul in a sea of assholes), some less so (Carrie Coon, terrific as always as Izzie’s formidable sister and former bandmate; she and Davis perform a ferocious version of Heavens to Betsy’s “Axemen“) and other somewhere in between, like Haley Joel Osment as a lovelorn, bathrobe-clad schlub who agrees to help Izzie if she voices his affections for the woman (Alia Shawkat) asleep in his living room. The path laid out by writer/director Christian Papierniak for Izzie to travel from Hot Mess to Potential Disaster is amusing and disjointed but occasionally slight and precious – like a hallucinatory meet-up with Izzie’s younger and future self – but the whole sweaty, sun-bleached affair is held together by Davis, who neatly embodies life in your twenties in Los Angeles, when you are messy and dumb and struck with moments of odd clarity and wisdom and dancing as fast as you can while fully aware that you look like a fool and trying (very hard) to let people know that you’re okay with it.

Paul Gaita lives in Sherman Oaks, California with his lovely wife and daughter. He has written for The Los Angeles Times, LA Weekly, Variety and The Fix, among many other publications, and was a home video reviewer for Amazon.com from 1998 to 2014. He has interviewed countless entertainment figures from both the A and Z lists, but his favorites remain Elmore Leonard, Ray Bradbury and George Newall, who created both Schoolhouse Rock and the Hai Karate aftershave commercials. He once shared a Thanksgiving dinner with celebrity astrologer Joyce Jillson, and regrettably, still owes the late character actor Charles Napier a dollar.
View all posts by Paul Gaita →
This entry was posted in Movies and tagged Izzy Gets the F*ck Across Town, shout factory, Shout Studios. Bookmark the permalink.