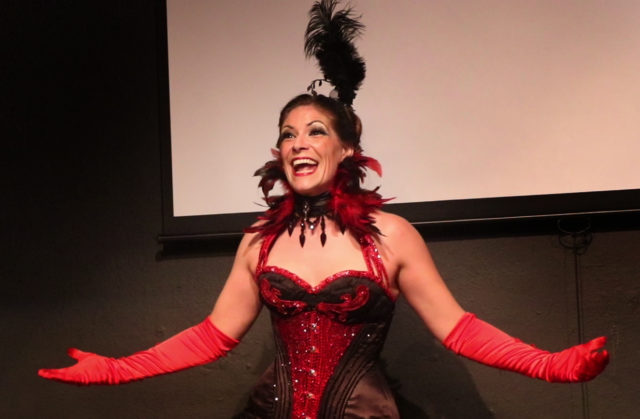 Although Vixen DeVille aka Cat LaCohie is sexy, warm, welcoming, energetic and embarrassingly gifted in a wide variety of talents, she is also self-deprecating, tough-as-nails, and incredibly funny.

Winner of the 2018 Best International, Soaring Solo Artist and Encore Awards, as well as Nominated for Best of Cabaret & Variety, at the Hollywood Fringe Festival, LaCohie’s show “Vixen DeVille Revealed” is first and foremost definitely an adult show. But it’s also immensely entertaining, comical, and even educational, with occasional moments of heartbreaking truth.

Dotted with video elements that document both the high and low points that have made Vixen DeVille a divine and fearless persona, LaCohie uses them to transition between the various pieces in the show. A British actress, model, aerialist, burlesque performer, show host, and seeker of all-things-taboo-shattering, LaCohie tightly mixes her combined talents into a tasty 50 minutes.

Between acts, LaCohie, tells her story on her hurtles through life’s obstacles, on coming out of her shell, and on falling into self-love, while encouraging us all to do the same.

Sound deep? It is a little. But aside from the occasional self-deprecation, truth-slinging, comedy, magic, and sideshow performances, there are also large swaths of super-sexy burlesque bits.

A unique highlight in the show when audience members who choose the VIP ticket option are invited to participate in brief lessons on fire-eating and/or glass walking during the show. These moments are chair-edge riveting, as—after fresh glass is smashed before us—apprehensive participants trepidatiously attempt to tread the glass, or place a lit torch within their mouths.

Scary as it sounds, LaCohie adroitly manages to make everyone, including those of use nervously watching on, feel safe and that all will be well. The process is exciting. 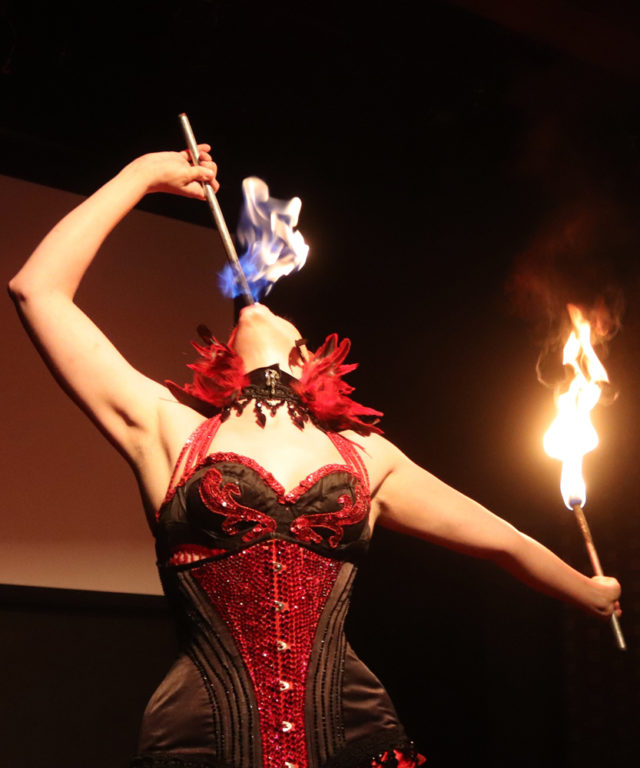 In another exciting moment, LaCohie — who makes all her own costumes and teaches the How-To’s — dons an outfit that could turn Red Sonja green with envy, wielding steel swords and heavy metal chains with power and verve in an amazing act that engages with an audience participant to a surprising finish.

Playful and fun, everything together makes for a very fast hour of entertainment. In the end, you will leave the theater feeling better about yourself than you would have ever imagined after a burlesque show. In fact, Vixen DeVille will demand that of you. Be prepared to submit.

Monique A. LeBleu is a writer, photographer, videographer, and shameless foodie and wineaux. A love of film history and a background in film production, post-production, and film theory provide unique insights into her movie reviews. As well, a background in technical theater fuels her passion on all-things theater. As a foodie, living in the ever-growing and diverse culinary landscape that is the City of Los Angeles feeds her never-ending pursuit of the perfect comfort food—the world's best Mac n' Cheese!
View all posts by Monique A. LeBleu →
This entry was posted in Attractions, Events, Miscellanious, Theater, Upcoming Events and tagged aerial, body confidence, burlesque, burlesque class, Cat LaCohie, Comedy, costume making, fire eating, glass walking, Hollywood Fringe Festival, Magic, solo show, stand-up, the lounge theatre, Vixen DeVille. Bookmark the permalink.