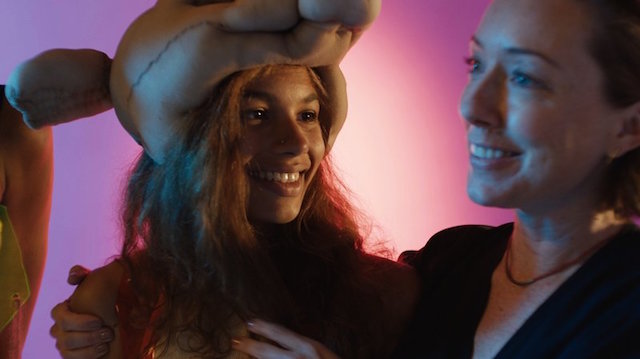 Madeline’s Madeline is part of the independent film movement that embraces surrealism, symbolism and expressionism as a way to tell a story. There is a ‘don’t look away’ visceral sense memory sensibility driving this uniques film. The cinematography is very much a part of this movie and is key into establishing, our and her, perception of reality for Madeline’s world. Madeline’s Madeline plays with context, it plays with how the camera frame is set on characters, the movie’s altered perception by changing depth of field or using a held camera to create sense of immediacy and intimacy. Madeline’s Madeline abandons a lot of traditional cinematic ways of telling a story. It is chafing and ingenious at the same time. The movie creates it’s own language as it pulls you along to the next scene. The story revolves around Madeline, as a teen coming of age, overwhelmed by her surroundings, her relationships and dealing with her past of mental instability. It’s not only a movie you watch but it’s a movie you feel as it leads through Madeline’s personal experiences of fascination, fear, anxiety, distortion, delusion and break order.

Madeline, played by Helena Howard, has a manipulative and overbearing mother, Regina played by Miranda July, who compresses and distorts the young girl’s perceptions of herself and others. Their relationship is tenuous and confrontational. Madeline is in the process of separating from the whole, the family, to the idea of the individual, of “me”, from her mother and that always constitutes conflicts. These conflicts are growing spasm as her adolescents flowers into adulthood. Because this is Madeline’s teen years she searching for her own identity and definition of self. There are a number of conversations between them both, ofter set in her mother’s car, defining Madeline’s place in their relationship. The car scenes are volatile and an incubator of Madeline’s frustration and alienation toward her mother Regina.

Madeline is part an acting class that uses physical theatrics as the mode of interaction and expression. The physicality of her acting experiences drive her inner dialog. It like the act of surfacing to consciousness where imagination and reality have no context, no mooring to sensible understanding of everything around her. All of Madeline’s impression mix to create montage of sensory experiences that bend, mingle or manifest from her id to her ego distorting or damaging the realm her consciousness. The prestigious theater company she’s involved in is headed by the theater director, Evangeline played by Molly Parker. Evangeline is enamored and moved by Madeline’s interpretation of reality and those performances that steals her attention away from the class putting Madeline center stage. Madeline’s inner drama surges toward the birth of Madeline’s truth, with all its confusion, pain and brutal revelations. Evangeline is rapturously insnared by these performances to the exclusion to everyone else in the theatre compony. This is where Madeline’s Madeline is born.

The power and the beauty of Madeline’s Madeline is how it engages us in our own inner dialog of conflict and resolution. That dialog embraces our fears, anxieties, expectations, hopes and a desire for community, our mutual commonality and humanity. Madeline’s Madeline offers moments of spectacular beauty, disorienting chaos, unsettling sense of danger, lucid moments of rattling clarity and at last a cautionary moment of revelry for life and wherever that life may take us. Madeline’s Madeline redefines the movie story telling model. Expect the unexpected.

Actress Miranda July will be participating in Q&A following the 7:00pm showing on Friday, August 17 and Saturday, August 18 at The Nuart Theatre for the opening weekend in Los Angeles.

Billy Bennight is a writer, photographer and wardrobe stylist with expertise and years of experience in these disciplines. His musical youth started as a Punk Rocker and has expanded into exploring many genres of music, with an keen interest in art, fashion, photography and writing. He shoots celebrity events and red carpets for The Photo Access and ZUMA Press. He is a member of the Los Angeles Art Association. His images have been published in The Los Angeles Times, People Magazine, Wall Street Journal and Vanity Fair. He's very engaged in life. You can follow him on his Facebook page at: www.facebook.com/billybennightartist and on Instagram and Twitter @billybennight
View all posts by Billy Bennight →
This entry was posted in Attractions, Miscellanious, Movies, Upcoming Events and tagged art, Arty, Billy Bennight, embraces surrealism, experimental, expressionism, Film, Helena Howard, Indie Film, Indie Movie, Madeline's Madeline, Miranda July, Molly Parker, Movie, Nuart, Nuart Theatre, oscilloscope laboritories, symbolism. Bookmark the permalink.