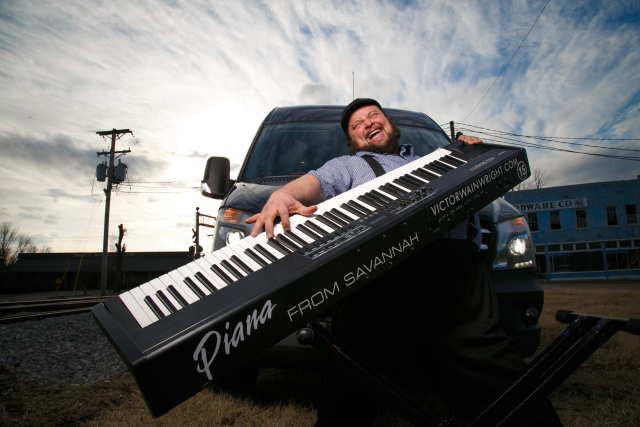 After winning the Pinetop Perkins 2018 Piano Award at the Blues Music Awards, Victor Wainwright brings his piano to Mozambique in Laguna Beach. The tour, in support of his new album Victor Wainwright & the Train, features Victor’s new band doing blues and boogie-woogie tunes that will have you up dancing, laughing at his stories, marveling at his piano playing and just really enjoying oner of the top boogie-woogie blues piano players in the world. Victor, who hails from Savannah, Georgia, has been compared to Dr. John with his playing and writing talent.

Following up on a very successful show this last weekend at the Big Blues Bender in Las Vegas alongside other top blues performers such as Kenny Wayne Shepard, Curtis Salgado, , John Nemeth and Tab Benoit, Victor will bring the new tunes off his new band’s album Victor Wainwright & the Train to the stage for their only West Coast appearance. Performing songs like the title track Train, Victor gives a live performance that is hard to beat. As he sings in Train, “If you wanna boogie get aboard this train/Get yourself a ticket or get out of the way…”

The Victor Wainwright & The Train album, on the Ruf Records label, showcases Victor’s piano as well as his songs that really will get you going. Straight ahead boogie-woogie, interspersed with Latin, New Orleans and other flavors, shows why he has won the Pinetop Perkins Award three times now as well as having several popular blues albums. Boogie-woogie, one of the most recognizable forms of blues piano, turns into magic under Victor’s deft playing. As a big proponent of roots music, Victor’s playing and singing is both an homage to greats of the past while bringing this style of music into the future.

Victor Wainwright also put magic into his lyrics. As Victor himself was quoted saying, “Of course, I still have songs on this album that are just about kicking ass and taking names, like The Train,” he laughs. “But if you listen to the lyrics, what I’m really saying is, we got to get on the train and move forward together.”

Ed is a native of Los Angeles who loves food and food cultures. Whether he's looking for the best ceviche in Colombia, the best poke in Hawaii, the best tequila in Jalisco or the best Taiwanese Beef Roll in Los Angeles, it's all good food! He also loves a good drink. He's had Mai Tais in Hawaii, Bourbon in Kentucky, Tequila in Mexico and Rum in Jamaica. His wine escapades have taken him to Napa, Sonoma, the Willamette Valley and the Santa Ynez Valley. And he's had beer all over the world! Music is another of Ed's passion, writing and interviewing many classic rock, rock and blues musicians. Getting the great stories of road experiences from them is a particular delight. Traveling also fits in with Ed's writing, exploring all over to find the most interesting places to visit, even in out of the way areas.
View all posts by Ed Simon →
This entry was posted in Music, Upcoming Events and tagged boogie-woogie, Ed Simon, Laguna Beach, Mozambique, piano, Pinetop Perkins, Victor Wainwright, Victor Wainwright & The Train. Bookmark the permalink.