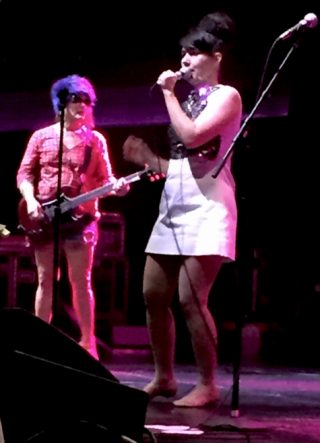 Bikini Kill at the Palladium. Photo by Deb Frazin.

Last Thursday night, Bikini Kill appeared onstage at the Hollywood Palladium for the first time in twenty-two years, to the first of four full houses they will encounter over the next week.  From the moment they walked on, you could feel total joy erupting from the audience, in which I would say females dominated by a six to one margin. Someone shouted “Girls to the front!” at lead singer Kathleen Hanna, a reminder of the call the band used to make in sweaty punk clubs. Hanna gestured to the rows in front of the stage and answered, “I think you took care of it!”

As someone who’s seen sees a lot of shows by old punk bands who have gotten back together, this ranks up there as one of the most potent I’ve ever seen. Nothing that was essential about them feels lost. The sounds are every bit as vibrant and full of life as you remember them. And those energies are being re-activated in front of an audience that in many cases, missed seeing the band the first time around, which allows that music to come alive again. That’s the best-case scenario for any reunion.

In Hanna’s case, that feels especially triumphant given the well-publicized battle with Lyme disease which had sidelined her last attempt to return to performing life. At the Palladium she looked and sounded invincible, throwing herself around the stage and hollering her old songs in that familiar bellow of old, all the venom, bile, authority and vulnerability still clearly audible.

Original guitarist Billy Karren can’t make it, which is too bad, his playing was a big part of their sound. But Erica Dawn Lyle proves to be a quite suitable replacement, an amazingly adept musician who can step in and take over, playing the songs with real power.

The rhythm section of Kathi Wilcox on bass and Tobi Vail on drums are, if anything, even more powerful than before. The band’s core sound is somewhere in the neighborhood of the Sex Pistols: mid-tempo but urgent, economical, with an air-raid siren for a lead singer. John Lydon once described the essential thrust of the Pistols as “I wanted to say what I meant, and sound like it.” The strength of the music behind the sentiment is necessary to make the idea come across, and this band really does sound like what it says.

For roughly a third of the set, they step outside their usual roles. Vail steps forward to sing lead on six songs, while Hanna picks up the bass and one of the others takes over the drum kit. Lyle and Wilcox take turns on every instrument. I’ve seen bands pull a switcheroo from time to time but rarely as often, as consistently as this. The cumulative effect of all this switching around is quite charming, and adds to the de-mystification of watching a big rock band. You can see how they make it work, if somebody has the idea that they want to play drums on this number.

I can remember being told that we didn’t need Bikini Kill back in the early 90s. The conventional wisdom within certain rock circles that were available to me as a mid-twenties white guy punk musician was that they were these screechy, man-hating assassins of fun. The day after their Jabberjaw show in probably 1992, I was in the patio at Al’s Bar hearing tales from all these guys who felt personally attacked by the band, who had said mean things to them in response to being heckled. “Call me a Sexist? ME? How dare they!” Scandalous!

As soon as they gained an inch of notoriety, they received backlash that was perhaps more severe than most bands have ever had to deal with. This was not limited to mean things being said about them. Courtney Love kicked off the Lollapalooza ’95 tour by sucker-punching Hanna square in the face in front of everyone backstage. Said punch in the face was cheered on by NOFX, whose righteous-bro hymn “Kill Rock Stars” includes the line “I wish I could have seen Courtney/ demonstrate some real misogyny” moments after saying “I thought the goal here was mutual respect,” without irony.

Anyway, here we are today. Courtney Love doesn’t make music any more and was last in the news for insulting Bikini Kill, calling them “amateurish,” and those wry comedians in NOFX just lost a corporate beer sponsorship and cancelled a tour over remarks they made suggesting that victims of the Las Vegas shooting deserved to be shot for liking country music. Meanwhile, Bikini Kill has sold out every single show they have booked. I hope a lot of people get to see them, because they’re very much still worth seeing.

This entry was posted in Events, Music and tagged Bikini Kill, Kathleen Hanna. Bookmark the permalink.

One Response to Live Review: Bikini Kill at Hollywood Palladium